From the Biennale of Venice 2017, at the pavilion ‘Cecoslovacchia’, a reflection on the buildings seen as the legacy of the communist era

Having crossed the red marble portal on which the large ‘Cecoslovacchia’ sign still stands out, a mysterious scarlet metal object welcomes the visitor at the center of an almost completely bare room. Only a few videos are running on screens attached to the walls on which we can see the variety of medium close-up and medium full shots interspersed with architectural images. Nothing else. At the center of the pavilion designed by the Czech Otakar Novotný in 1926, which the two republics continue to use jointly, a milky overhead light floods and surrounds both curious visitors and the hermetic metal installation, the object of their curiosity. This is indeed enhanced by its bright red colour, and the abstraction of its forms, made with metal grills and box shapes, the installation leaves room for the imagination before being identified for what it really is. A building of the future, a game for children and even an apparatus for acrobats as you hear some visitors suggesting, who whisper while walking around the installation, until a surge of astonishment on their faces indicates that among those fascinating, faint lines they have recognized the giant maquette of the Slovenská národná galéria. 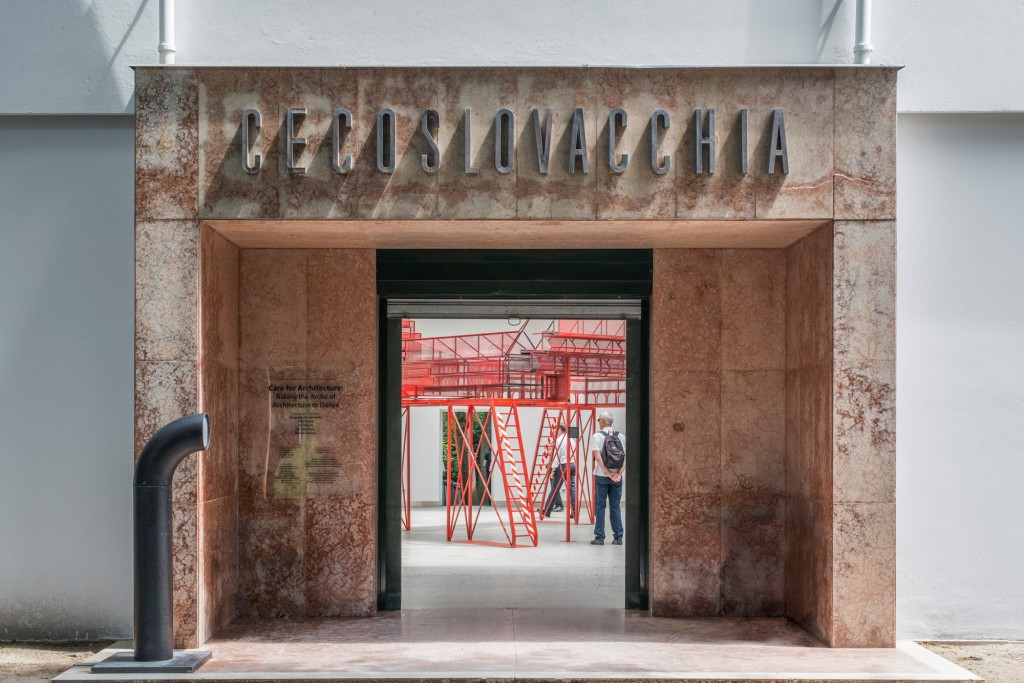 The protagonist of the Czechoslovakian pavilion at the fifteenth International Architectural Exhibition of the Biennale of Venice is an exclusively Slovak example only in appearance. The complex containing the Slovenská národná galéria (SNG) of Bratislava, is offered as a paradigmatic case in order to introduce a topic concerning all countries of the Eastern bloc. The choice of this widely debated complex with its turbulent fate in fact allows the joint guardianship of the two republics to address the delicate and slippery question concerning the future of the architectural heritage, the legacy of the years of Communist domination.

The boldness, gigantism and solemnity that adorn this vast legacy – in the eyes of many – appear as an incessant celebration of the old regime, while transforming the very buildings into nastily mocking symbols of a recent past that dot the territory. The political nuance of this heritage is so deep-rooted, and visceral in their minds to contaminate and wiping out any other character – configuring those architectures as objects to be demolished without any form of compromise.

This view of things probably reminds readers of the sudden events preceding the epilogue of the story of the memorable Hotel Praha, the lone giant concrete five star hotel that has towered over the city from Hanspaulka hill for a little over three decades. Remarkable for this speech was the debate generated by the resolute will to ‘erase’ the hotel, relegating it without appeal to the pages of a few volumes of the history of architecture.

Surely for ten years the hotel represented a true golden fortress for illustrious delegates of the Communist bloc parties. However, once that stage was over, an interesting piece of architecture undoubtedly has remained harmonized in the hill – designed to produce technical and stylistic achievements, investing huge resource – and in culture – thanks to stratified nebula fueled by discourses that keep on surrounding the building.

In this ‘everything’, the reader will fittingly oppose, there is undeniably also the political page, the face of propaganda and control, but it is only one of many possible facets than can be spoken of regarding that architecture, although for some this aspect outclasses every other possible one.

On the basis of this attitude you can justify, though not without a certain urgency, the questioning of the fate of this heritage, but above all the possibility to go on enjoying these architectural objects, excluding in some way the heavy burden of identity that distinguishes them. In other words, the question is not only whether the architecture of the Soviet era must be necessarily demolished or saved, but whether they can have another life beyond the symbol of the regime and be looked at with new eyes, even if not naïve.

The lively debate on which the construction of the Czechoslovakian pavilion is focused revolves around this question, and fits into the broader theme of ‘Reporting from the front’, the title of this fifteenth edition of the exhibition edited and directed by Chilean Alejandro Aravena.

A subtle and ethereal cultural and temporal border, anything but ephemeral, is therefore the one investigated and narrated by the exhibition commisioners Monika Mitášová, Monika Palčová and by Benjamin Bradňanský, Petr Hájek, Vít Halada, Ján Studený, and Marián Zervan – the authors and curators of this production – through the events for the maintenance, the reconstruction, and renovation of the complex of the SNG.

Born after the Second World War, the idea of a great national gallery for Bratislava came with great effort and alternate phases of configuration planned by Vladimír Dědeček between the Sixties and Seventies.

Having never been entirely accepted or implemented, the gallery has been at the centre of a broad public discussion triggered by the post-1989 proposals to raze the entire area to make way for a completely new gallery. To date, this debate has given rise to two contests organized to gather proposals for a renewal and expansion of these spaces.

The big red metal three-dimensional model raised on stilts abstract from the forms of the Slovenská národná galéria, almost in a dance – offering a new up-view perspective that allows visitors to get an unusual cutting-edge view on the object. The new view with its high metaphorical value seems to suggest the need to focus on the complexity tout court of the architectural object, and all the intangible cultural universe that revolves around it, and not only on the purely spatial one articulated in amphitheatres, courtyards and bridge-galleries.

The video snippets reproduced on monitors facing each other along the perimeter walls collect interviews reporting varied ideas, and opinions on what the fate of the SNG project should be, showing different forms of concern for the complex. On the one side, known as the ‘fight wall,’ you can watch the video clips to follow the positions linked to the fight for the meticulous preservation of the project in its original form, accompanied by a repertoire of historical materials on the complex. On the opposite side however, called the ‘dance wall,’ you can listen to the arguments and proposals of those, who extricating themselves in a sort of dance, aware of the environmental and cultural details, look towards a renovation of the buildings housing the gallery.

Under a new light the pavillion revives the long-standing issue of the dormant potential of the Architecture. A potential that must be able to soar freely thanks to the courage of intrepid cultural projects focusing on care and attention without poor compromise, which while faking attention, ignore and refuse to embark on the cultural dance of the universe that every architectural object is able to attract to itself. 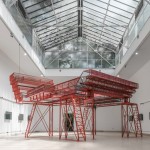 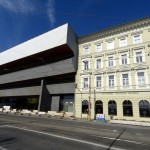 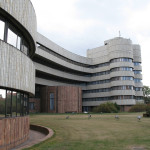 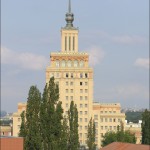