For those traveling by train in the Czech Republic it is increasingly common to see very long freight trains at the stations. An infinite quantity of barked trunks can be seen on the wagons that together form entire woods in a horizontal position. The trains, when they leave, proceed at a slow pace, like a funeral procession, representing the scourge that is destroying the forests of Bohemia and Moravia.

The cause is a xylophagous beetle (which feeds on wood) with a rather poetic name: European spruce bark beetle (Ips typographus). It is enough to go into the Czech woods, especially in the north and east of the country, to realize the anomalous situation in which they find themselves. It is not difficult to run into spruce trees, which present the typical tunnels dug by the parasite in the wood under the bark. Needles of the sick plants take on a typical reddish color. Along the paths fallen trunks pile up and in the middle of the forest you often come across clearings left completely bare of trees. 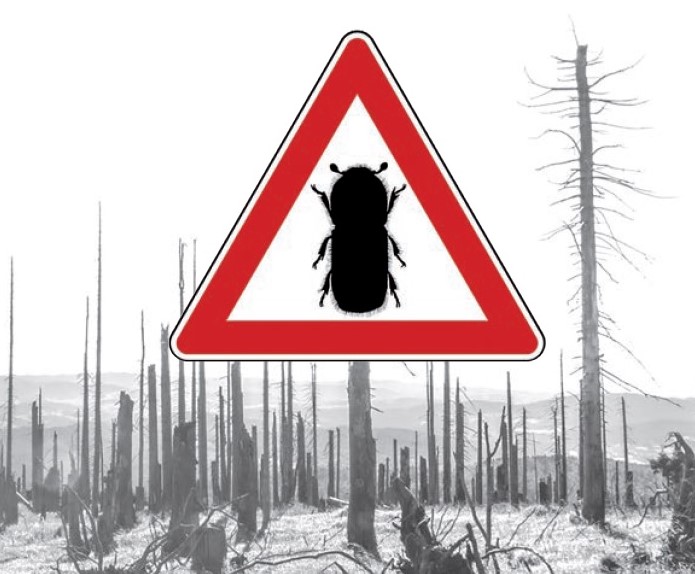 End of forests in the Czech Republic?

The small parasite, which mainly affects firs and conifers, is a natural part of the forests. In a healthy ecosystem the Ips typographus helps to dispose of sick or felled trunks, thus facilitating the regeneration of the forest. Healthy fir trees can cope with the beetle, which sticks to the trunks under the bark, simply by submerging it in resin. The weakened trees on the other hand, succumb by gradually drying up.

Since the 1980s, the beetle has repeatedly struck the forests of the Czech Republic, attacking plants weakened by environmental and climatic pollution factors, whether acid rain, or, as more recently has been the case, drought. However, the current situation is unparalleled if compared to the past. Between 2015 and 2018, 22.5 million cubic metres of affected trees were knocked down. In the previous emergencies of the Eighties and Nineties the total threshold of eight million cubic metres had never been exceeded. The speed of the emergency is accelerating. Between 2017 and 2018 the volume of trees collapsing due to the beetle, doubled from 6 to 12 million cubic metres. Regarding 2019, the forecasts speak of a volume greater than 15 million cubic metres with even darker hypotheses, which reach 30 million cubic metres. “As for the presence of bark beetles, the situation is catastrophic in most of the territory of the Czech Republic” explains the Forest Protection Service (Lesní ochranná služba). “In many areas its spread is out of control.”

In reality, the spruce bark beetle crisis is a perfect storm resulting from a combination of short-term, long-term, natural and social, ecological and economic factors. The underlying factors of the crisis are the persistent drought, which has weakened the trees, the rising temperatures that favour the reproduction of the parasite, and the uniformity of the Czech forests composed essentially of fir trees, the favorite food of the bark beetle.

“Research, culling, removal and effective reclamation of affected trees must be a priority” adds the Forest Protection Service. But often timely intervention is made very difficult by the chronic lack in the Czech Republic of manpower, by the lack of interest in forest work and also by the insufficient infrastructure to move the logs of entire collapsed forests. It is therefore estimated that only 17 percent of fallen trees are subject to reclamation treatments. The resulting overproduction of wood has brought down the prices of this raw material on the market by more than 50 percent, putting the owners in great difficulty.

The situation is made even more complicated by the ownership structure of the woods in the Czech Republic. The State and other public bodies own as many as 1.8 million hectares, out of 2.6 million of total forest area, and about half are headed by a single company, Lesy ČR sp (the acronym s.p. stands for státní podnik, state company). On the one hand, the strong concentration of ownership would facilitate the implementation of emergency measures, but on the other hand the public nature of the company often slows down the implementation of such measures. In fact, Lesy ČR must follow the procurement code and all other procedures which the public administration is subject to.

And the public nature of Lesy ČR is one of the central issues of the current catastrophe. There is no doubt that the state forest company has done a lot of pushing regarding the fir monoculture in view of immediate profits. In the years before the crisis, Lesy ČR was milling profits of billions of crowns, which have long been an extra source of income for the state budget. According to critics, this is not matched by equally careful attention towards the ecosystem of the woods. Foresters have an increasingly larger area to monitor and do not have direct means of intervention available. The company, which thanks to its dominant position always attracts numerous criticisms, rejects all charges and indicates the measures adopted. Among these there is also the renewal of wetlands, which should retain water in the woods and alleviate drought phenomena.

Despite the various measures undertaken, stopping the disaster is very difficult. “At the moment we do not know if we will be able to contain the disaster in the future or stop it” explains Vít Šrámek, director of the Forestry and Game Management Research Institute (Vúlhm). According to many predictions, the calamity will only come to an end when the bark beetle has devoured all the fir trees at their disposal, as is already happening in the most affected districts of Moravia and Silesia. It is clear that after the crisis, the Moravian and Bohemian forests will no longer be what they once were.

The ancient temptation of spruce

The spruce is an old temptation of Bohemian and Moravian foresters. About one hundred years ago, as 1910 came to a close and at the start of the 1920s, the emergency related to the infestation of the nun moth (Lymantria monacha) broke out, which sent a third of the Czech woods down the drain. The causes of the crisis were very similar to that of today: years of drought, less care of the woods due to the peculiar post-war situation and the lack of manpower, and above all the spread of fir monoculture planted even in low and extremely low altitudes. As in the 1920s, today’s foresters also see a single solution to get out of the emergency: a greater spread of mixed-composition forests with a greater presence of beech and oak trees. The new tree mixes will also have to withstand changing environmental conditions due to global warming. In general, however, a radical change in values will be necessary, favoring environmental and long-term landscape advantages over immediate economic gains.

The new climatic conditions will not allow the mistake of the fir monoculture to repeat itself. According to experts, due to climate change, the landscape in Bohemia and Moravia will resemble the areas of northern Italy or central-southern France with a large presence of vineyards, small water mirrors and wetlands and less dense mixed forests. The signs of the spruce bark beetles on the trees are farewell letters to the landscapes that we today consider typical of Bohemia and Moravia.