A trip to discover Bohemia and Moravia often means finding oneself in places that the public all over the world knows after having already seen them at the cinema. From Prague, a capital enshrouded in mystery, history and unique atmospheres, to Karlovy Vary, from Český Krumlov to the landscapes of Moravia, the country may appear as a giant open-air film set. And yet, when taking into account the small size of the Czech Republic, one of the most striking aspects is the abundance of castles, from the ancient and evocative medieval manors to the splendid aristocratic residences, which are used as film locations.

It would be enough to think of those easily reachable from Prague, even simply in a classic day trip, such as Karlštejn, Křivoklát and Dobříš.

The first, for example, played an important role, not only in the classics of the Czech new wave such as Návrat ztraceného syna (Return of the Prodigal Son: 1966), and Údolí včel (The Valley of the Bees: 1967), but also in the hugely popular comedy musical Noc na Karlštejně (A Night in Karlštejn: 1973) in which the castle was the real star of the film.

On the other hand, Křivoklát, the foundation of which dates to the 13th century, was chosen by director Terry Gilliam in 2005 for the dark and gloomy setting of the Grimm brothers’ fairy tales. In addition to the world of monsters and spells born from the imagination of the famous Jacob and Wilhelm Grimm brothers, Křivoklát Castle was also frequented by the assassins of Wanted (played with relish in 2005 by James McAvoy and Angelina Jolie), as well as by the Borgias in the series of the same name (2011-2014), and by the King in the fairy tale Třetí princ (The Third Prince: 1982). The latter however, is only one of the countless Czech cinematic fairy tales set in this castle.

We therefore move to Dobříš, about 40 kilometers south of Prague, where we can find the splendid aristocratic residence, built in the Rococo style, known as the Pink Castle. Also in this case, the interest of film producers around the world has been enormous. The Czech public will recognize it from numerous Tv fairy tales, the most cultured film buffs from Případ pro začínajícího kata (Case for a Rookie Hangman: 1970), the Kafkaesque classic of the “Nová Vlna”. Fans of Hollywood cinema however, will recognize it as the location of the historical thriller The Illusionist (2006). The latter, set during the Austro-Hungarian empire of the late nineteenth century, exploited the marvelous interiors such as the hall of mirrors where the famous scene of the magic show takes place. From Dobříš, not even the beautiful French gardens have been neglected by filmmakers, having appeared in the thriller From Hell (2001) based on the graphic novel by Alan Moore and Eddie Campbell and with Johnny Depp in the lead role. And how can we forget the scenes of Shanghai Knights (2003) shot there, in which action film legend Jackie Chan was called upon to retrieve the Chinese Imperial Seal.

Among the castles in the surroundings of Prague, Konopiště is yet another stand-out, about 40 kilometers south-west from the capital. Known for being the place where the Archduke Franz Ferdinand of Austria-Este established his home in 1914 and where he used to go hunting, Konopiště (like Křivoklát and Dobříš), is used in the thriller The Illusionist. It is here where the character of Leopold, exactly like Ferdinand, uses the nearby woods for the art of hunting. The castle, which today preserves the bullet with which Gavrilo Princip killed the archduke, “the bullet that started the First World War”, can also be seen in some of the most beloved Czech films of the last forty years such as the fairy tale Jak se budí princezny (How Princesses wake up: 1977), and two classic comedies Adéla ještě nevečeřela (Adéla hasn’t had her supper yet: 1977), and Jára Cimrman ležící, spící (Jára Cimrman laying and sleeping: 1983).

Jak se budí princezny, in addition to displaying the beauty of Konopiště, is also filmed in another location that is very much in demand with film crews from all over the world. We thus move away from the surroundings of Prague to head to the heart of the Bohemian-Moravian Highlands, a wooded area where Pernštejn, one of the most beautiful castles in the Czech Republic, a jewel of Gothic and Renaissance forms, has been standing for almost eight centuries now, and also attracts visitors due to the presumed presence of a ghost, the White Lady. One can only wonder whether the legend was one of the reasons that led the esteemed German director Werner Herzog to choose it as Count Dracula’s Castle for Nosferatu the Vampyre (1979). He was forced to fall back on what was then Czechoslovakia, after having encountered too many obstacles to film in Ceaușescu’s Romania. The manor of Pernštejn also appears in Van Helsing, a Hollywood action movie from 2004, in which the antagonist of the main character, is again the famous Transylvanian Count conceived by Bram Stoker. We also may recognize it from the action film Wanted, then again in Bathory (2008, the most expensive Czech production to date) and finally in Fantaghirò, the Italian fantasy television miniseries from 1991 directed by Lamberto Bava.

Regarding the horror genre, it would be difficult to find a better suited castle than that of Jezeří, the “baroque pearl” of the Ore Mountains, linked to the many distinguished cultural figures who frequented it such as J.W. von Goethe, Giacomo Casanova and Ludwig van Beethoven. However, Jezeří is also remembered for Howling II: Your Sister Is a Werewolf (1986), a story of lycanthropy which among other things has frequently been listed as one of the worst films in the history of cinema. The American crew’s decision to shoot in the area was made during the Cold war years, and while the permit was granted, the Czechoslovak authorities nevertheless suspected that it was only a pretext to study the territory and develop a plan to invade the country. As a result, the American filmmakers were constantly monitored, to the extent of even leading the director to the belief that his assistant “was one of the STB or KGB”. On the other hand, despite the background and the atmosphere of tension in which the filming took place, it must be acknowledged that the castle itself is truly ghostly, and absolutely worth visiting.

And what about the spectacular Gothic castle of Hluboká? Červená Lhota? Švihov? Český Krumlov? Not to mention many others located not just in Bohemia, but in Moravia. There is an abundance of places that attract both tourists and Hollywood location managers.

Recently, there has been a worldwide trend towards tourism in famous movie locations. Having perceived this trend, the Czech government agency CzechTourism has developed the special application Czech Film Trips, with which you can travel around the country in the footsteps of heroes and famous movie stories. We too, in the second installment of our article, will continue our journey to discover castles used as film locations, arriving in other beautiful places in Bohemia and Moravia. 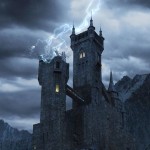 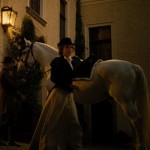 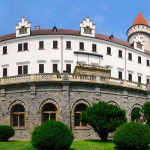