Home  »  Economy and Market   »   Czechs and Expo, the many victories of creativity

Czechs and Expo, the many victories of creativity

A brief history of the Czech participations in the large World fairs, and of when the Prague style surprised the world

A grand parade of artists, who intrigued and fascinated visitors. Yet, the winning factor of the Czechoslovak pavilion at Expo ‘58, was something else: the design

The history of the universal exhibitions is over a century and a half long, containing fascinating episodes, classified by year: in 1889, the upturned noses of Parisians who follow the inauguration of the Eiffel Tower; 1937, the Nazi leaders annoyed by the exhibition of Picasso’s Guernica; 1962, the first passengers on the futuristic Seattle Monorail. The history itself tells us a lot about the fascinating role for the forefathers of the current Czech Republic.

There was a time when the Czechs took part in the Expo as subjects of the Austro-Hungarian Empire, by exhibiting the textile or crystal production, sectors in which Bohemia was the pride of Vienna in the eyes of the world. We find proof of its fame for example in the “World of Yesterday” by Stefan Zweig, the Austrian writer of Jewish origin, perhaps the most widely read among his contemporaries in the twenties and thirties. A genuine global star of literature, whose father, a native of Moravia, was among the entrepreneurs who in the late nineteenth century, gave birth “to small improvised factories, initially powered only by hydraulic forces, but which gradually developed until they formed the backbone of the Bohemian textile industry that would dominate the whole of Austria and the Balkans”.

Yet the artistic genius was able to escape from the role of industrial power, and to stun and amaze. This was the case of the Expo 1900, in Paris, when Alfons Mucha stood out for his decoration of Balkan domains. It was he who drew the pavilion of Bosnia and Herzegovina. The event launched Art Nouveau as the style of the times, and Mucha, its main protagonist, was rewarded for his work. He emphasized how his aesthetic sense was the conceptualization of his homelands, of his being Czech. Being finally independent, in the times of the First Republic, the Czechoslovaks kept the elegant and avant-garde character that the democracy of Mitteleuropa, surrounded by authoritarian governments, wanted to give of itself. 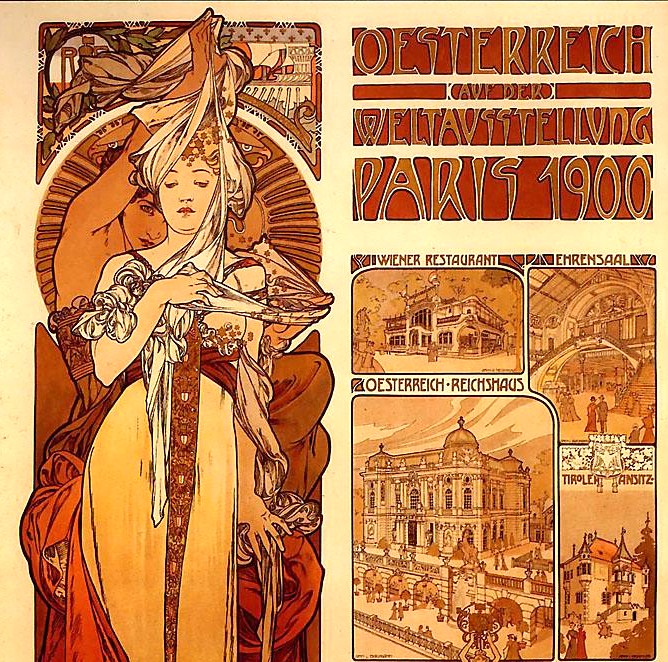 In Barcelona ‘29 the decorations of the national pavilion earned Ladislav Sutnar, the architect and graphic designer from Plzeň, a gold medal for the design with strong structures that gave birth to the constructivist style (the heir of which would be socialist realism).

However, the Czechoslovak masterpiece came in 1958, with the Brussels Expo, the first major exhibition of the Cold War. A calm moment during the conflict between the blocks. The revolution had not arrived yet in Cuba, Khrushchev was leading the de-Stalinization. For Prague it was the first opportunity to showcase the excellence of socialist progress, while for many Czechoslovaks, it was the first chance of a trip to the West. The country had gathered its most gifted artists together. Laterna Magika, a particular mix of theatre, dance and projections, still a major tourist attraction in Prague today, made its debut at the huge fair, in a show conceived by Alfréd Radok and Josef Svoboda. Radok’s Assistant at the time was a certain Miloš Forman, aged 26, at the beginning of a career that led him to be one of the greatest directors of world cinema. Also Jiří Trnka, the famous “Walt Disney of the East”, took part in the events by projecting some of his films, including a preview of his “A Midsummer Night’s Dream” by Shakespeare.

A grand parade of artists, who intrigued and fascinated visitors. Yet, the winning factor of the Czechoslovak pavilion at Expo ‘58 was something else – design, once again. The invention of a soft and modern style, famous even today.

“František Cubr, Josef Hrubý, Zdeněk Pokorný…” Michaela, a twenty-four year-old, blue eyed History of Art student at Charles University, rattles off the names of the great Prague architects whose signatures gave life to the pavilion that year. In her field those names, little known to the general public, are pronounced with such enthusiasm. We are in a cafe in the stylish Prague district of Vinohrady, the “Kaaba”, which was inspired in every detail by the Expo ‘58 style, the so-called “Bruselský styl”, consisting of rounded and light forms of furniture, pastel lamps, walls with geometric drawings from soft colours, round tables surrounded by chairs with stronger tones. One senses the nickname “soft modernism”.

Michaela keeps an edition of the volume “Bruselský sen”, the dream of Brussels, underarm, which was published a few years ago on the occasion of the fiftieth anniversary of the event, explaining its influence on the lifestyle of the 60s. “The other countries created projects in the wake of the previous major exhibitions, and when the Bauhaus school and functionalism won, the names in vogue were those from Barcelona ‘29, Ludwig Mies van der Rohe and László Moholy-Nagy, the great artists of modern and industrial architecture. Some projects were from the thirties, having been blocked by the cancellation of the exhibition in New York in 1939. The Czechs brought something different”, a different that struck to the extent of actually winning the Grand Prix for best exhibition pavilion – the small nation squeezed in the match between the powers managed to surprise the world.

The dream of Brussels, it must be stressed, represented an ideal world, an ambition sometimes far from the true socialist Czechoslovakia, a design difficult to reproduce on a national scale. Something did return home in a concrete form though: a pavilion restaurant, designed by the trio of Cubr-Hrubý-Pokorný, was dismantled and rebuilt in Letná park, in Prague. Part of the assets that were sold off in the nineties, it now houses the offices of an advertising agency.

The boom of 1958 was the biggest win, but Czechoslovakia managed to convince yet again. “The Kinoautomat ‘67 in Montreal!” the student underlines emphatically.

At the Canadian fair Prague managed to live up to expectations for a pavilion that knew how to amaze the public. The director Radúz Činčera invented the first interactive film, one of the most inspired attractions in the entire Expo. It was a projection with nine interruptions, and at every stop there was a “crossroads” that gave the audience the opportunity to decide the direction of the plot, as well as take part in the composition of the film. A black comedy about an apartment facing a fire, which regardless of the sequence of choices, would end with the entire building going up in flames. For Činčera, it was a satire of the Western democracies. Montreal wielded long record of visitors, there were more than 50 million in total – the Czechoslovak pavilion was the fifth most watched, once again matching the great nations.

In 1986, again in Canada (Vancouver) Činčera brought back that mix of art and innovation, in the wake of the Kinoautomat. This time the public did not decide the fate of the actors, but came on the screen in first person with “Actorscope” and “Selectorama”, a mix of optical effects that transported visitors to Charles Bridge, or in an air balloon above the Bohemian city.
Since the Velvet Divorce, in the last twenty years the Czech Republic has not made it mark with exceptional appearances at universal fairs, sometimes more distinguished by its absence (Expo 2008 Zaragoza). In 2010 the Czech pavilion managed to intrigue again, in the middle of the largest Expo ever organized, in Shanghai, with 192 countries and 73 million visitors. Yet again it was a victory for imagination, with the futuristic, visionary work of Federico Díaz, a Czech of Argentinean origin, “LacrimAu”, a huge golden tear enclosed in a glass cage. Every visitor, entering the cage with headset sensors, operated the release of a fragrance modulated on their reactions. An installation that enabled the Czech pavilion to reach over five million visitors.

Shortly, the Milan Expo will begin, with the theme “Feeding the Planet, Energy for Life”. After some hesitation, the Czech Republic has confirmed its participation. On its shoulders it carries an important career, but it is anchored by the dreams of the past. The challenge is to amaze us yet again.