posted by Redazione May 19, 2016 Economy and Market

Vintage design and an electric motor, the Čezeta scooters, icons of Czechoslovak roads in the sixties, are born again

A massive, rounded body, and an extended “front” that ends with a big chrome headlight: because of its original features, the Čezeta scooter was given the nickname “Prase” (pig) ever since it was produced. The Čezeta (ČZ), perhaps, evokes very little or nothing to most of us, but at the turn of the fifties and sixties, when young people in Italy were dreaming of owning a Lambretta or Vespa, the ČZ 501 and 502 were the icons of Czechoslovakian roads.

Produced until 1964, after half a century, the Čezeta is back again with the new Type 506, thanks to the passion and work of Neil Eamonn Smith, the English entrepreneur who resides in the Czech Republic. Its retro line is exactly the same as that of its original model, but the engine is now electric, a choice that has not caused great excitement among the Czechs.

A few years ago, while walking in Prague’s Vinohrady district, Smith became fascinated by one of those strange motorcycles and, after enquiring about the model, he was able to find three vintage motorbikes to be restored. It all started as a hobby, but he soon realized that the ČZ was the perfect base from which to realize his dream and create an electric scooter. In 2012 he began to work on it and within a year his pastime became a serious project. He registered the Čezeta trademark and established the Čezeta motors company – which has no connection with Česká Zbrojovka Strakonice, the manufacturer of motorcycles and firearms that produced the old model. “After over fifty years, there was practically nobody in the Czech Republic that had any intention of starting again from the Čezeta. A great pity – Smith declares. – It is part of local history and it has a fantastic design”. In November 2014, after two years of tests and an investment of around one million crowns, he exhibited the first prototype at the Prague “For Energo” fair and turned to Lutz Buennagel and Alex Monestier, who were experts in the automotive industry, to launch the 506 on the sustainable mobility market. The first world presentation of a model with excellent technical parameters, good quality materials and high-tech accessories, took place in March at the Motosalon in Brno. 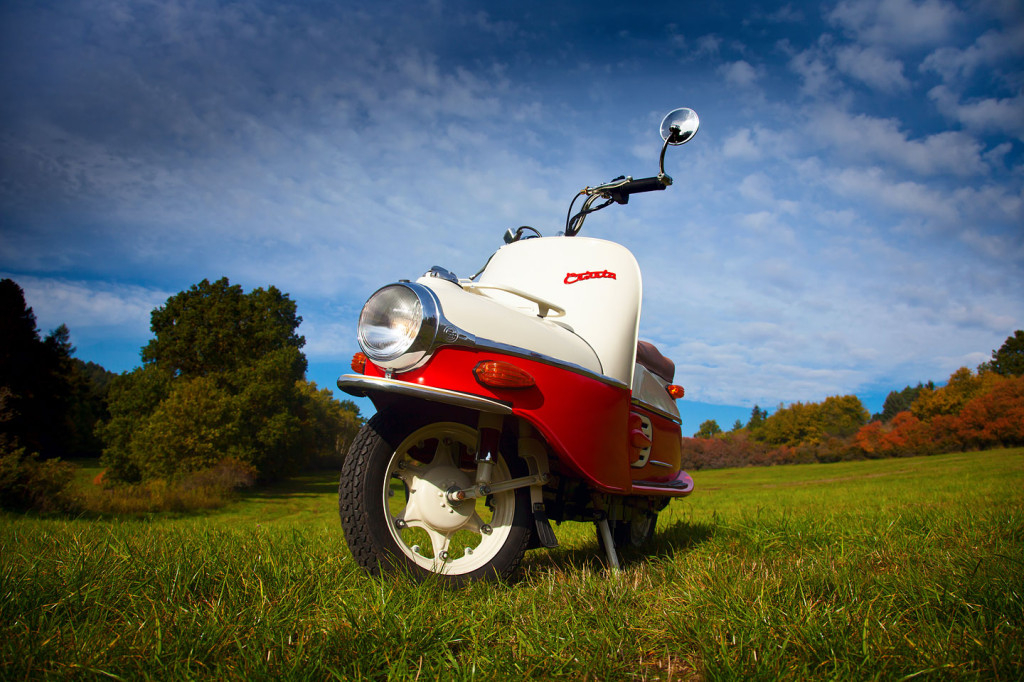 Before examining the features of the 506, we would like to tell you the story of its predecessor. Even before the second World War the desire was to create a comfortable yet modern scooter and behind a few of the most brilliant ideas that came out, there was always the name of Jaroslav František Koch, a motorcycle manufacturer, who had collaborated with Česká Zbrojovka Strakonice. In 1940, he patented the chassis and then, at the Prague showroom in 1947, he was able to catch the public interest with a prototype that had a rather unconventional shape. Ten years later, Strakonice’s company started the mass production of three hundred ČZ 501 with 175 cc. engines and a combination of six colours. In 1960, the modernized version of the 502 was produced, which had a single exhaust pipe and the possibility for it to be hooked onto the Pav 40 luggage trailer. It was then the turn of the ČZ 505 three wheeler, and the Druzeta 502 sidecar.

It might seem strange to connect a trendy product with Eastern Europe, but the Čezeta, with its contemporary design, was actually a vehicle for the revolutionary era. “I admired all those levers, but I didn’t know anything about their function. I was attracted to them and found them fascinating”, writes Marcel Malypetr, author of the book Skútr Čezeta. The ČZ brought the Czechoslovak motorcycle industry to the fore and in the post-war period it was one of the most developed, though it was the Motokov company that actually exported them around the world. They reached their peak of popularity in the Netherlands, where they changed the nickname to “La Boheme”, as in the US, and especially in Wisconsin, whereas in New Zealand they bought the original pieces and reassembled them and were known as N-Zeta. Of the more than 115 thousand ČZ produced, only few of them were actually sold in Western Europe where nobody was familiar with the model; in England they bought only around a hundred of them. However, they were cult objects in the Soviet bloc countries. Yet, it was precisely the imposition of the communist party, and not market demand, that was responsible for curbing the further development of the motorcycle sector. Foreign literature, that follow the development of the scooter market often does not even mention the Czechoslovakian ones, whose production over time gradually faded away and eventually came to a halt. This happened to the Čezeta model in 1964.

Their fame is still alive today among enthusiasts and collectors, who show them off at motorcycle and vintage vehicle rallies. For example, next June, the Skútr klub Čezeta is organizing the XIX International Rally of Czechoslovakian Čezeta, Tatran and Manet scooters at Hrabušice, in Slovakia. Yet, it is these same enthusiasts that have turned away from the 506, which they find not at all convincing, due to its ecological aspect – which is its main innovation. “Electric propulsion is doing well, but not for the Čezeta. It doesn’t seem the same”, says Tomáš, a sceptical middle-aged man from Prague. “After all, petrol is petrol – adds Marek. – ČZ fans love tradition, so why not create two different lines? I wish them every success, but I believe it is going to fail”.

However, Neil Smith has no intention of giving up. To power the 168 kg, 506 model they will not install the old two-stroke 175 cc., but a 5 kW electric motor, that is able to guarantee a top speed of 90 km/h using lithium batteries and has an autonomy of 100 km. The motor is mounted in the rear wheel and the battery is hidden inside the body, that used to be partly taken up by the engine. “At the moment it takes about 4.5 hours to charge it, but we are working on a faster system that will allow the battery to be recharged in 25 minutes”, says Neil Smith. The accumulator and electric motor are made in China, but for the other parts, the entrepreneur prefers to use and support local businesses.

To highlight its technological aspect is the introduction of a smartphone app. also for tablets, that is designed to interact with the vehicle in order to determine maximum speed and acceleration, control the remaining charge of the battery, look for the nearest charging station or listen to music via Bluetooth from its integrated speakers. The same handset may be connected to a 12V USB socket charger. The telephony combination is not new for the Čezeta, because back in 1961 in Holland, a radiotelephone was already being installed on police motorcycles.

If all goes according to plan, in August, Čezeta Motors will start the production of the first one-hundred scooters, all hand made in its factory in Mirošovice, not far from Prague and customers will have the possibility to purchase the scooters by the beginning of next year. The goal is to place 500 scooters on the market in 2017 and reach a thousand within five years. Despite financial difficulties in passing from the prototype phase to mass production, the long-term plan is a demonstration of the company’s intention to develop and go on investing in the electric version. There are requests from Paris, Barcelona and Vienna and from Western European countries, that receive state subsidies if they buy electric-powered vehicles, and these include Spain, Holland, Italy, and North America where there has been a boom of electric cars. It is rather sad, however, to witness that on the home market the amount of interest shown for this renewed legend is rather low, but clean vehicles are not sufficiently in vogue and the lack of enough charging stations and state subsidies is not helping the sector to become more popular. An additional factor is its price, which starts at 9,900 euro, almost 270,000 crowns for the base model, accessories and customizations excluded. “For that amount of money I can buy a Harley Davidson or a car, such as a Škoda Fabia”, says Pavel. Even the manufacturer is quite aware that its price is rather high for most people and, at least for the time being, his aim is to conquer foreign enthusiasts with his handicraft and high-quality scooters – keeping an eye on style.

For the moment, the company is seeking to make itself known by means of a strong advertising campaign and by taking part in international sector showcases, starting with Intermot in Cologne and the Eicma showroom in Milan. Furthermore, they have been increasing the number of test drives and trial runs that may also be booked at the new Prague showroom on the main Na Příkopě street, where you may also take a close look at the 506 model with its comfortable leather saddle, accessories and zero emissions solar battery-charger, as well as the leather handbags, satellite anti-theft device and led safety indicators. You may choose from eight colours, including the original white-blue or white-red combinations. “I take great care of my white-blue 501 model, of which I am rather jealous, that still works perfectly well, but I would never have thought it would ever be produced again – says the seventy year-old Zdeněk. – I belong to a generation that still remembers when the scooter first came out, although I had never heard of the name “pig”, that was widely propagated in various articles. I have owned a motorcycle since I was 18 and used it to go to work and to go out on week-end trips, without wearing a helmet, with a cigarette in your mouth and a beautiful girl sitting on the back. The sixties, how great it was then…”. I wonder if actually seeing these new ČZ models on the road will eventually induce Czech people to put aside their distrust for this eco-friendly scooter that has made history and intends to continue doing so. 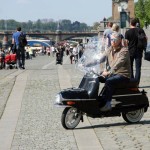 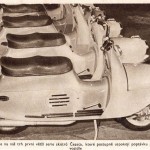 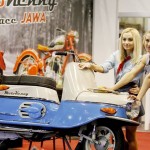 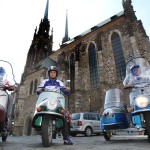