In memory of the recently deceased author: by chance a witness of the 1968 invasion, awarded by Havel in 2000, then snubbed by Charles University in 2013

“Do not ask me why I like Prague so much; when a man falls in love, he is unable to explain”

Yes, it is true, “The Prague Cemetery” is a very significant clue in indicating how Umberto Eco and the Bohemian capital intertwined. The title for the 2010 book was chosen by him, as many others could have, due to the gothic aura of mystery and esotericism that has, by now, become a recognized brand in Prague. Yet one must go back many years, to almost half a century ago, when Czechoslovakia became, unfortunately, the crux of history.

“I was passing through Prague, while heading by car to Warsaw for a conference, a cultural trip, me, my wife and two friends”, wrote the writer on the pages of Espresso on September 1, 1968, in the calm after the storm of the armed intervention by the Warsaw Pact troops. “A stop at Marienbad and Karlovy Vary, to rediscover the taste of the Hapsburg splendor seasoned with the popular tourism sauce, and then Prague, to meet friends of the Writers Association”. Having arrived on August 19, the four stayed in the working class district of Libeň, and from there they saw the invaders march on the morning of the 21st, leaving them surprised, like the rest of the country. 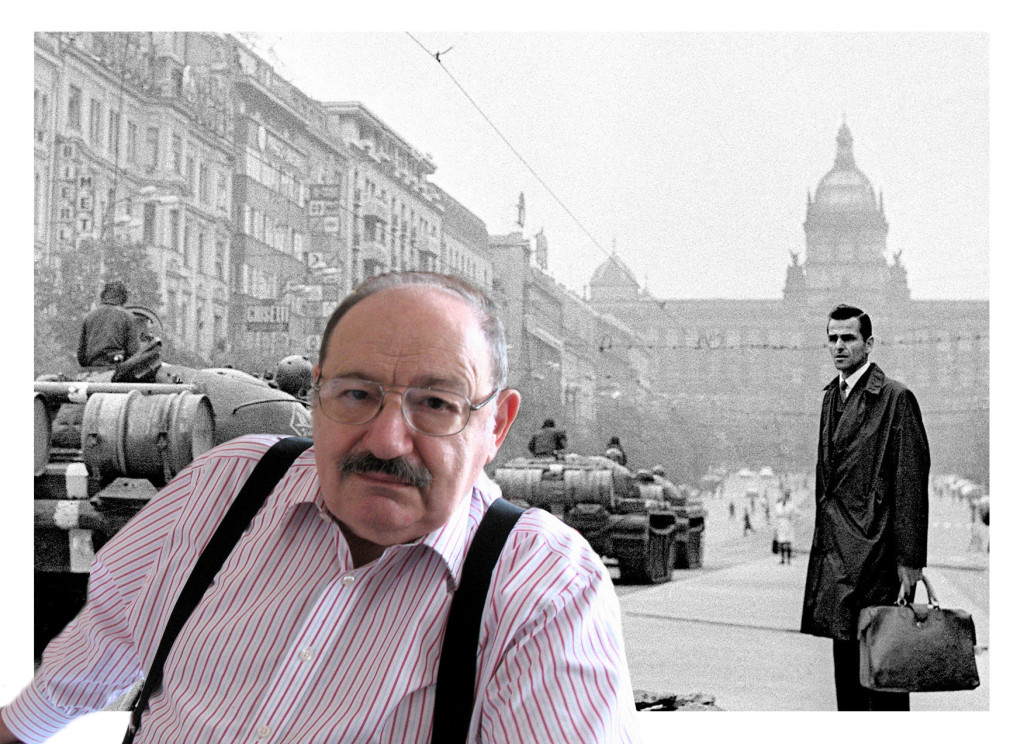 Eco, philosopher and writer, as a journalist had no desire to become a war reporter, especially with his wife following him, so the first idea was to jump in the car and flee to Austria: the tank, however, was empty. So he walked towards the city to search for fuel, and in what was merely a walk for a few kilometers, he became an eyewitness to the first hours of the occupation. There he observed the long lines of tanks, discussions in Russian between the occupiers and occupied, the anger of the Prague citizens, the confusion of the invading soldiers. In the afternoon, under the Hradčany castle, a cafe with his friend “K”. (which fictitious name other than K, under Prague Castle?), “three hours of an infinite sadness”, in which his friend could not hold in his tears. Once he returned to his accommodation, Eco faced the hostess with a 20 litre petrol can in his hands: the next day they were heading south, along with other Italian cars.

A few years ago, on the 40th anniversary of the invasion, his colleague Enzo Bettiza, a journalist and writer, raised controversy on that particular report, and on a discussion that the two had at the Hotel Sacher in Vienna in those days. “He did not care at all about the students, or the Prague workers. He only cared about the Soviet bloc remaining intact”, the accusation was picked up by some Italian newspapers, especially from the right-wing press, while reusing the photographic services of Josef Koudelka on the violence, that Eco, they say, did not want to see due to his blind communist ideology. When rereading Espresso’s article, it appears to be clear, however, for those who have some experience with the events of ‘68, just how reliable the witness is, and how no attempt is made to diminish the Soviet’s irremediable error. For the hidden violence, a map of the city would be sufficient: the philosopher wandering through the tank treads could not have been able to see the gunfire, since the assault on the headquarters of the national radio, anticipated by machine gun fire and fifteen corpses in front of the door, took place in the opposite neighborhood, Vinohrady, to the one he came from. The extravagant tales of dances and discussions on the tracks were later confirmed by other eyewitnesses. As to the confusion of the occupants, it was later described in detail for readers of Le Monde by French journalist Isabelle Vichniac. The nonviolent resistance in Prague was also, as told of on those pages, an incomplete story, but not incorrect.

The doubt is that Eco ended up in the trap of torn Prague, in the story altered on principle from right to left, misunderstood and yet on everyone’s lips. Almost sensing future controversy, the article ended with the words: “We are in Austria. The danger is over. In a sense we are at home. What should I do? Play the marines hymn? But the betrayed socialists who I left at Prague, would not want this”.

The personal story between the professor of semiotics and the Prague Spring has a special conclusion. Twenty years after the afore-mentioned events, the leader of those betrayed Socialists came to his academic home, the University of Bologna. It was 1988, on November 13, when Alexander Dubček was awarded an honorary degree in Political Science, almost a resurrection for the Slovak. “I’ll come back, even if I have to jump over the barbed wire”, he wrote to a friend before that historic trip of his, before finding a flood of journalists from all across the world calling his name. The enthusiasm for the former secretary of the Czechoslovak Communist Party surprised the then dean of the Faculty of Political Sciences, Professor Guido Gambetta, who had wanted him in Bologna. He said it himself to the Czech News Agency, ČTK, which three years ago (i.e. 25 years later) published an article with the opening words: “have Umberto Eco and Alexander Dubček ever met?” The agency then gave an affirmative answer, since with Eco, star of the University, was the first in a series of Bolognese visits (among others the Slovak met the future Italian Prime Minister and European Commissioner Romano Prodi and the exiled Jiři Pelikán, director of Czechoslovak television during the Spring).

At the time the semiotician was known in Czechoslovakia, for his first novel, The Name of the Rose, rather than for his academic writings. Written in 1980, it was translated by Zdeněk Frýbort and published in Prague in 1985 by the Odeon publishing house. With “Jméno růže”, Frýbort began a long-distance relationship with the Italian, an author-translator partnership lasting more than twenty years, to which we will return shortly. Meanwhile the nineties and the “2000s” led Professor Eco to worldwide luminary status. It is not a simple generalization, just take for example the wikipedia page dedicated to him, presented in 88 languages: quite literally globalized. Among his accolades was also a new Prague passage, in 2000, in which he received the Vision 97 Award of the Foundation of Dagmar and Václav Havel (then President of the Czech Republic), an acknowledgment addressed to men of science capable of influencing “the fundamental questions of human life”. Eco took the opportunity to declare his passion for the city, which he finally saw flourish (a passion equally directed, as the glutton he was, to knedlíky, a cornerstone of Bohemian cuisine). He added, “do not ask me why I like Prague so much; when a man falls in love, he is unable to explain it”. Havel, for his part, declared to be fascinated by the erudition of the writer, describing him bluntly as “a remarkable literary phenomenon and a semiotician whose work will inspire many generations”.

It is this character, by now gigantic, who in 2010, after having translated the first four novels (after the first “Foucault’s Pendulum” in 1991, “The Island of the day before” in 1995 and “Baudolino” in 2001, would follow), the 80-year-old Frýbort described the man with the utmost frankness of those who are not overawed by laurels. “Umberto Eco can write, but is nothing brilliant”. It was in an interview for Progetto Repubblica Ceca, in anticipation of the arrival of the new novel “The Prague Cemetery”, (indeed) and Frýbort, an Italian language lover, emphasizes that the narrative of the semiotician is effective, but that the poetry does not reach the heights of the real masters of the local style (he mentions his friend Edoardo Sanguineti, as he does the classics by Pasolini, Gadda, Morante). The news was picked up by several Italian newspapers, considered to be harsh criticism, but actually Frýbort, with whom Eco had a cordial relationship, took nothing away from the writer’s ability to navigate the “labyrinth of human knowledge”, as written by the Italian-American academic Cinzia Donatelli Noble.

The last connection with Prague is once again on a slightly controversial note. By now we are at the end of 2013, when the Academic Council of the Prague’s Charles University cast their votes for his nomination for an honorary degree for the famous scholar, who by now boasts more than thirty of these titles. The news is not the nomination, which would not surprise anyone, but in the negative outcome of the vote: the professors of the University founded by Charles IV did not consider the writer to be an ideal candidate. Of course, the practice of honorary degrees is now a marketing operation for the universities, who by leveraging the inexhaustible vanity of academics, use degrees as banner ads. Unfortunately for the prestigious university in question, the decision was not made by moral integrity, but apparently, by a proverbial blunder, since the communication from the council declared his activity as a novelist and playwright to be neither sufficiently academic nor cross-curricular, but Umberto Eco, has never been a playwright…

The controversy of Bettiza, the frankness of Frýbort, to the failure of the honorary degree, Eco got through it all pretty much unscathed, partly because amidst the controversy he was not in the wrong, but partly due to the arrogance of a university baron to whom he certainly was not immune: arrogance yes, but on the other hand, how could he have avoided being proud, when he was Umberto Eco? 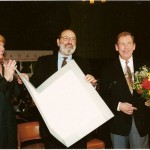 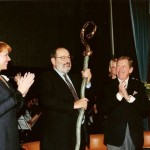 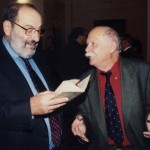 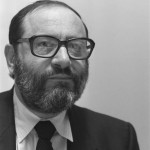 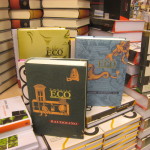