The study centre dedicated to the former Czech President in the centre of Prague: a place of research to delve into the concept of dialogue

The events are frequent, one every three to four days, at the Václav Havel Library, the library located in the magical heart of Prague, in Ostrovní 13, and ideally connected with the events of the Forum 2000, the platform for intra-intercultural dialogue, for respect of human rights and freedom, founded in 1996 by Václav Havel himself, together with Nobel laureate Elie Wiesel and Japanese philanthropist Yōhei Sasakawa.

Born having taken inspiration from the US presidential libraries, the Havel Library is very active in promoting the thoughts of the Czech statesman and his political and theatrical works and offers a myriad of seminars, concerts, discussions, book presentations and conferences of all kinds. It is a place especially for debate, that kind of debate that Havel always wanted to be constructive, rational and aimed towards understanding the opinions of others, keeping the mind open to new impulses and new ideas. Ideas on democracy, politics and society. 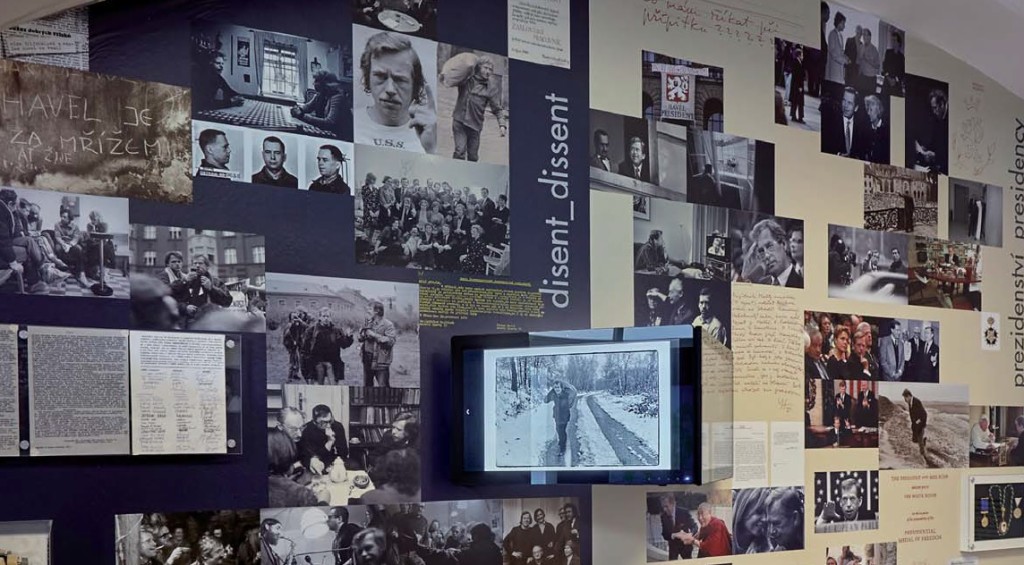 Located not far from the “bohemian” Národní divadlo, the Prague National Theatre, immediately entering, on the right, a large hall opens that hosts events and conferences, always fairly crowded. In a counter, at the entrance, posters, postcards, books and publications of all kinds that recall the figure of the former President, hero of the Velvet Revolution. In the “backstage” the archive, which the library has fed for years and makes available to the public: over 5,600 letters, 5,400 books, 1,700 photos and 270 videos of the former dissident and playwright.

There is no lack of young people who attend. For over a decade the library has been organizing a competition for high school students, who are invited to submit a written paper on a topical subject. This year’s theme seems like a rather provocative invitation for the participants to reflect: “What perception do you have of the country in which you live? Is the Czech Republic a paradise on earth at first sight?”

Among the various initiatives, let us not forget the Václav Havel Prize for Human Rights, an award given annually by the Council of Europe, in collaboration with the Prague Library and the Charta 77 Foundation. This year the award went to Ilham Tohti, an Uighur intellectual sentenced to life imprisonment in China, and to the “Youth Initiative for Human Rights”, which brings together young Balkans from different ethnic groups, to promote reconciliation.

Throughout his life, which was shortened by the smoke from his many cigarettes, and the unhealthy atmosphere of the prison, where he was locked up twice, Havel always tried to promote the principles of tolerance and freedom, respect for human rights and aversion to every kind of totalitarianism. The work of spreading the concept of an open society that Havel always tried to spread around the world. This is also underlined by the photos on the large walls of the “museum” section of the library, in which the first President of the Czech Republic is displayed alongside other great figures of the earth, from the former American secretary of state Madeline Albright (originally from Prague, like him) to the Dalai Lama (of whom Havel was very fond), to Bill Clinton (who also invited him to speak at the Washington DC Congress), Barack Obama and Lech Wałęsa.

It was in fact the electrician of Solidarność, a sort of Polish Havel, who took part in the last edition of the Forum 2000 (13-15 October 2019) and was the protagonist of a debate moderated by Michael Žantovský, the former ambassador, today president of library and former spokesman and consultant for Václav Havel.

The figure of Havel is certainly a complex one: the study centre in his honour helps readers to identify the multifaceted personality, as well as shyness, strength of mind and inner fragility. He trusted in the self-determination of every human being, in his ability to get out of the uniform, grey, flattened, dangerous, fierce and (un)controllable mass; to get out of the artificial and collectivist “majority” to achieve “uniqueness”.

For him, exalting the human being as “unique” did not mean isolating him from the society in which he grew and worked, but rather elevate and celebrate it. In a special way, Havel believed in the right to disagree: to raise his hand within the mass, celebrated in words and humiliated in facts by the totalitarianism that afflicted the blockade of the East.

Like Hannah Arendt before him, he intensively studied totalitarianism, having experienced it first-hand. “Those who live in a post-totalitarian system”, writes Havel in The Power of the Powerless, “know only too well that what matters is not whether there is a party or more parties and their name in power, but if you can or you can’t live humanely”.

A lover of truth, opposed to every kind of lie advocated en masse by the supreme party, which justified the worst repression and violations of individual rights with the concept of “welfare of the people”, the cult phrases of Havel in fact have been chosen to decorate the large arched walls from the museum section of the library: “As long as appearance is not compared to reality, it does not seem like an appearance; as long as life in lies is not compared with life, in truth there is no point of reference that reveals its falsity”.

And what is a totalitarian system if not an immense catafalque that tries, every day, mercilessly, to annul the individual conscience in favor of a collectivist and inhuman spirit? Totalitarianism is a huge fiction machine: the elevation of the lie to industrial levels in an Orwellian society. There, where, “power is a prisoner of its own lies and therefore must continually falsify. Falsify the past. Falsify the present and falsify the future. It pretends not to have an all-powerful and capable police apparatus. It pretends to respect human rights. It pretends not to pretend”.

His Library enshrouds the curious traveler with values that today seem to be forgotten or thrown into a closet. Through the instrument of culture, it is suggested that you rediscover and at the same time preserve the philosophy and the figure of a man, who with culture, fought for freedom.