Home  »  History   »   From Pelikán to Havel: Craxi behind the iron curtain and the Czechoslovak dissidents

From Pelikán to Havel: Craxi behind the iron curtain and the Czechoslovak dissidents

In early 1989, the socialist leader launched an international petition in favour of the release of the man who, a few months later, would become the hero of the Velvet Revolution

After the repression of Prague Spring, many were purged from the structures of the Czechoslovakian communist power: not only Alexander Dubček, but also Jiří Pelikán, former director of State television, protester against Soviet interventionism. The youngest among the Deputies in the National Assembly (1864-1969) he was a staunch Stalinist and lifelong communist; he was forced to go to Italy, as Leonid Brežnev, director of the Prague repression, considered Czechoslovak TV a center of counter-revolution. A troubled dissident, he arrived in Rome after the Soviet invasion, initially as a cultural attaché of the Czechoslovak Embassy. Subsequently, at the beginning of the so-called normalization in Czechoslovakia, and after having refused to return to his country, he remained in Italy as exiled, homeless, without documents, citizenship and hunted by the StB. As his wife, Jitka Frantová remembers, he had quite a few rough months.
Supported by the group that created the manifesto as well as by Livio Labor and Carlo Ripa di Meana, Pelikán came into contact with Bettino Craxi. Pelikán already knew this latter from one of Craxi’s stays in Prague in the 1950s.
The Socialist leader showed interest in dissidents from beyond the iron curtain also when he was Prime Minister. Craxi distinguished himself by pursuing the interest and attention towards the Second and Third World, promoting the dialog with some countries of the Soviet universe, strengthening relations with states such as Brazil, Peru and Chile.
The relationship with Pelikán helped to solidify Craxi’s interest in Socialist internationalism and the riots of dissidence; all in light of his PSI breaking away from the PCI and directing his party towards a clear programmatic autonomy. Therefore, Craxi candidated Pelikán tothe European Parliament (1979 and 1984) and it was thanks to him – as Miloš Zeman recalled in a conference organized by the Italian Cultural Institute in Prague, in 2015 – that the dissident became the voice of free Czechoslovakia in the European institution. According to Stefania Craxi (Critica Sociale, December 2008), the relationship between her father and Pelikan was important for the PSI in choosing a more inclusive policy than the countries of Central Europe.
The relationship between Craxi and the world of Central European dissidence was even more significant when Václav Havel – who unlike Pelikán and Dubček had never been a Communist – was sentenced to nine months in prison for having participated in a demonstration in memory of Jan Palach, in January 1989. For that occasion, during a press conference in March, Craxi surprised everyone by proposing the creation of an international committee for the liberation of the playwriter; the intuition of promoting a petition in favor of the future federal president was the occasion to discredit real Socialism even further. 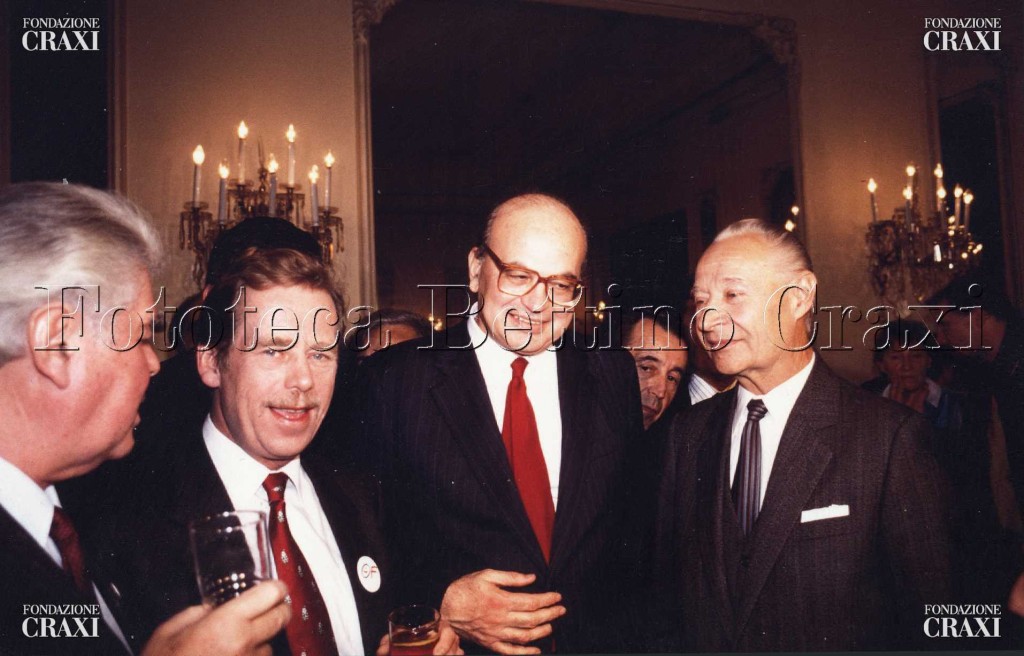 Craxi’s forum proposal was an unprecedented operation in Italian politics, which overall has always been indifferent to the dissidents’ microcosmo in Central and Eastern Europe. On the other hand, in 1988 François Mitterrand went to Prague to give some kind of blessing to the dissident movement, which further motivated Craxi to carve out more political space for himself in this regard. And he was right on time with this, since Havel was released in the autumn of 1989, just in time to enjoy as a free man the crumbling of the Communist regime, a regime that had persecuted, repressed and spied on him and his family.
“He broke the long-existing relationship between power and culture. Among those who can and don’t know, and those who know and cannot, he knows and does”, said Havel about Craxi – according to Ripa di Meana –, when the European Commissioner for the Environment visited him under house arrest in Prague. After many struggles and accompanied by his wife Marina Ripa di Meana, the future Minister of the Environment reached Havel who during the meeting asked him about that Bettino “beyond the iron curtain”, almost as if he wanted to establish a trans-European political cooperation.
After the collapse of the Berlin Wall in 1989, Craxi reaped the fruits of his relative reformist vision: the separation from Moscow, the esteem for Dubček and the hospitality shown to Pelikán in Italy were a clear demonstration of this. Exhausted by the Reagan Doctrine and its internal contradictions, in the first third of November 1989 the USSR was in coma: and even though Gustáv Husák was flatlined on the Moscow cult, the dissent became louder in the Warsaw Pact countries, as well as the request for more freedom.
A month later, after the Velvet Revolution on November 17th, Craxi himself flew to Prague and met Dubček, who had just returned to Bohemia from Slovakia. The former leader of the Prague Spring had previously had various relations with Italy: the most recent mentioned him receiving an honorary degree from the University of Bologna in 1988.
On his Prague trip, Craxi – followed by Paolo Franchi from Corriere della Sera and Beppe Severgnini from il Giornale – was accompanied by Pelikán who, willingly like Dubček, returned in the spotlight of the active public life in Czechoslovakia. The photographs of the time show Craxi and Pelikán wrapped in warm coats on the Charles Bridge and in the city trams. At the base of the statue of Saint Wenceslas, in the homonymous square, as reported by Massimo Pini (Craxi, Una vita, un’era politica) Craxi wrote on a manifest: “The Italian socialists rejoice in the revival of freedom in Prague”. 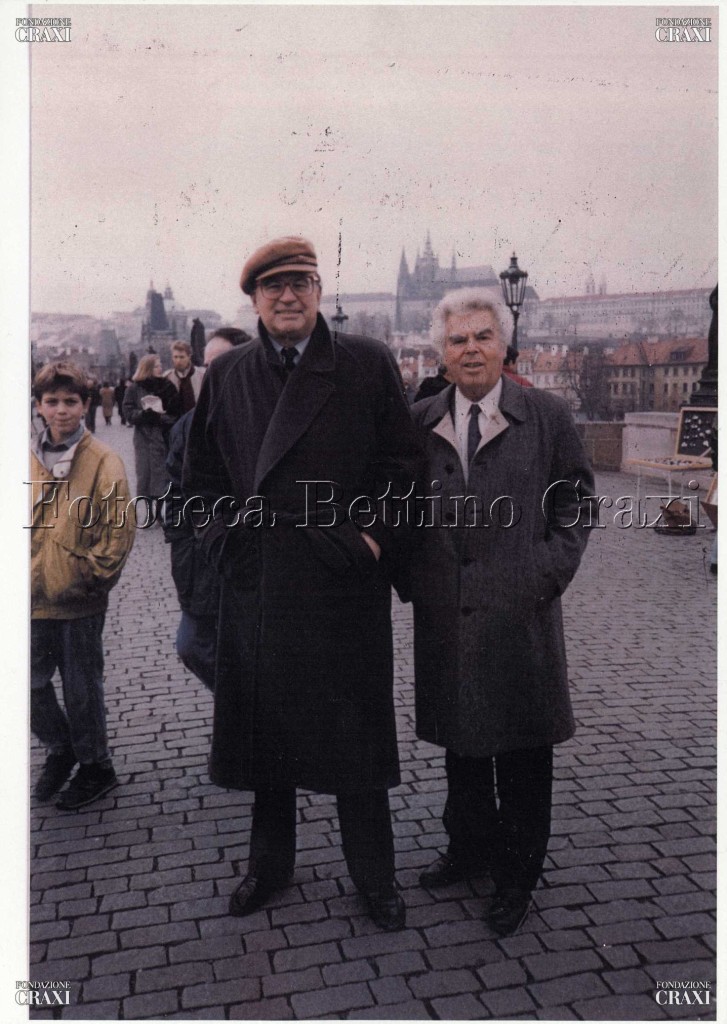 After the meeting with Dubček, the agenda of the PSI leader included a meeting with the head of the Civic Forum (OF) at the InterContinental on the Vltava River, then with both during a meeting at the Embassy of Italy. On this occasion, Havel expressed gratitude for Craxi’s international commitment, taken on nine months earlier.
Pelikan attended all the meetings of the Socialist leader, including the one with the elderly Cardinal František Tomášek; who knows what this latter must have thought seeing the ex-Stalinist Pelikán arriving at the archbishop’s palace together with Craxi. In his Ostpolitik, in the attempt to establish connections beyond the iron curtain, Craxi tried to interpret the dissent of the East: he didn’t have the same ties with Havel as he had with Pelikán, but – as evidenced by Havel’s subsequent visit to Milan in the study in Piazza Duomo –, the esteem was mutual. The hero of the Velvet Revolution hypothesized the creation of an alternative model to Socialism, Craxi intended to revise Socialism from a reformist perspective. It is curious that the two met when their respective political parables marched in the opposite direction.
At the end of the 1980s, Craxi found himself in the swamp of national politics after the years of great encounters, from Ronald Reagan to Yasser Arafat, but in the early 1990s, the socialist leader was involved in small rivalries in his party and in the sterile negotiations of a crepuscular CAF (Craxi-Andreotti-Forlani). Already afflicted by health problems it would seem that Craxi did not understand how, once the Wall fell, much of the historic mission of the anti-communist dam was exhausted; the Mani Pulite enquire would then have certified the end of an entire political class.
As for Havel, on the other hand, in December 1989, he was in full political ascent: he would have never expected to become President of the Republic within a couple of weeks. For years he pulled out the concept of “revolution of hearts and minds” by Tomáš Masaryk; his OF was formed by the students and dissidents who emerged from the underground theaters of Prague in Národní Třída in November 1989: the enthusiasm in the streets of Prague in the aftermath of the bankruptcy of Communism was decisive in crowning him as the only candidate to the Castle.
Craxi, Dubček and Havel were three reformers: in three different historical moments – Dubček in the late 1960s, Craxi in the 1980s, Havel in the 1990s – they revolutionized (some in word, others in deed) their respective political structures. Attracted by social democracy’s relative modernism, the three characters were skillful political experimenters who in different ways also upset the left of their respective countries.
Craxi’s understanding of the dissidents was highly developed. The Socialist internationalism had always been the focus of the Italian leader: and the good relations with Pelikán, Dubček and Havel created an unprecedented cultural bridge between Prague and Rome. Craxi had a sincere interest for the Czechoslovak dissidents; which represented also a way to distinguish himself from the PCI, but at the same time it was a political mission for the controversial Italian politician, animated by reformism, always keen on reconciling what historically was proven irreconcilable on several occasions: socialism and freedom. 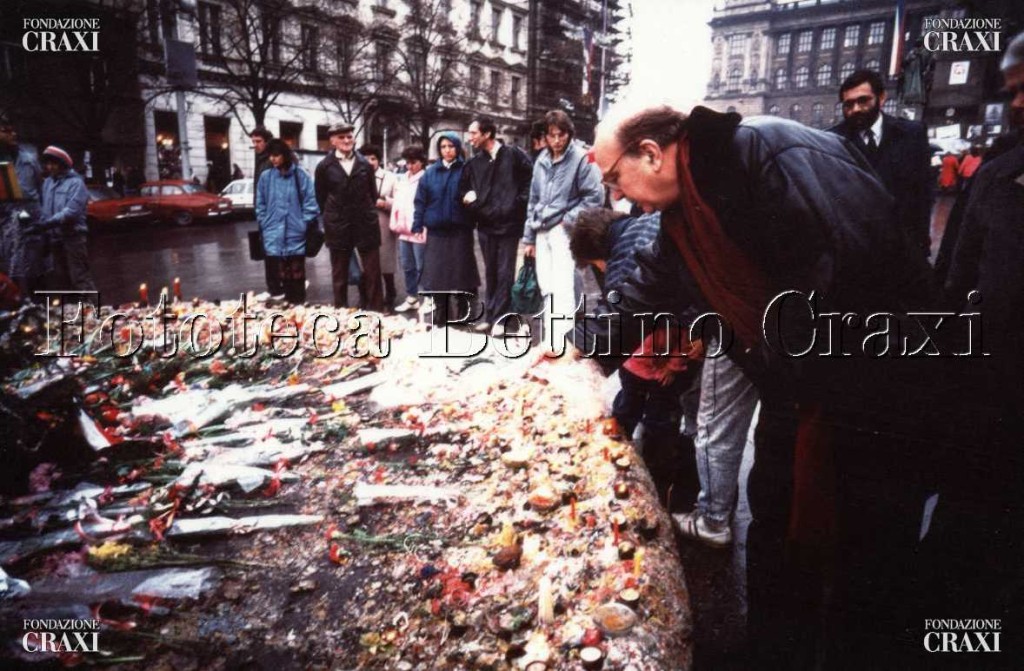 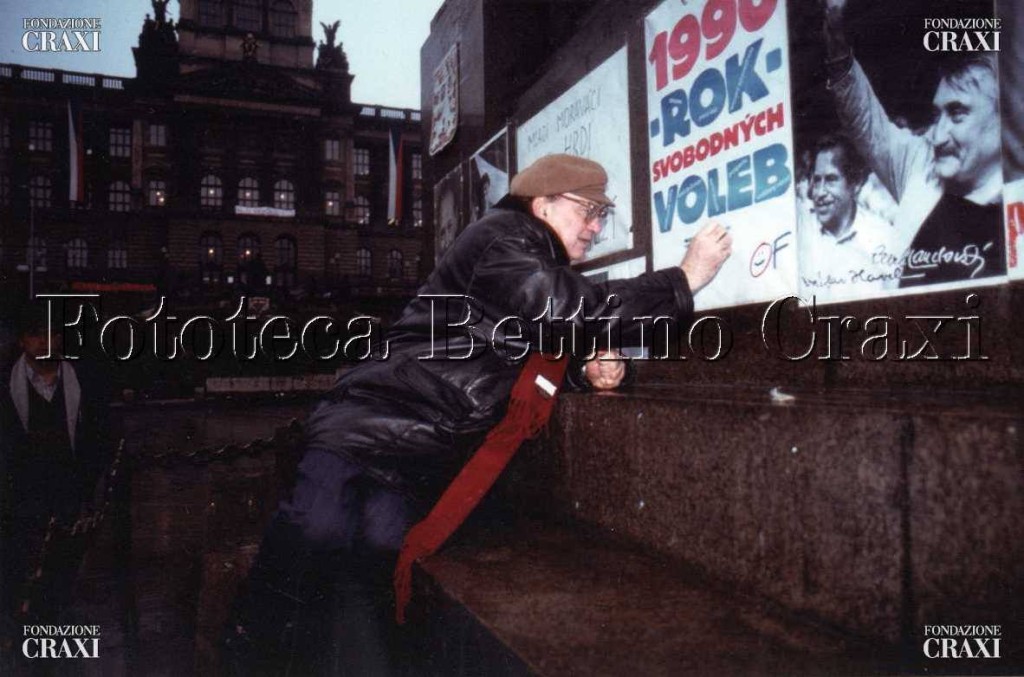