Emil Hácha is one of the most controversial and most tragic characters in the history of this country. Traitor or patriot? Looking back on the tragic parable that brought him to history, we can say that he was probably neither.

In order to discuss it, it is necessary to start from afar, that is to say from the Munich “agreements” of September 1938, when Germany, France, the United Kingdom and Italy arbitrarily decided to mutilate the western borders of Czechoslovakia. President Edvard Beneš had not even been invited and that was a fatal mistake for London and Paris, which consequently legitimized the wicked policy of Hitler’s appeasement, leaving Berlin free. Free, even to the extent that a few months later, in March 1939, in spite of the treaties for which he had obtained the Sudeten territory, Hitler invaded the entire region.

The transfer of the territories on the border with Nazi Germany led to the passage from the First to the Second Czechoslovak Republic on October 1, 1938. This was intolerable for Beneš, who shortly thereafter resigned and later expatriated to London.

On November 30, 1938, he was officially succeeded by the conservative Catholic Emil Hácha. Widowed since February of the same year, he graduated in law at the end of the nineteenth century at Charles IV University (where he later became associate professor), lawyer, judge of the Supreme Administrative Court in post-Great War Vienna, and therefore judge in the similar organ in Prague.

It was Tomáš Masaryk, first President of the Czechoslovak Republic, who appointed him, in 1925, as President of the Supreme Administrative Court. Specializing in international law, a legal expert, and translator from English to Czech, the elder Hácha was sincerely convinced of the independence of Czechoslovak territory from Nazi Germany after the diktat signed in Bavaria. 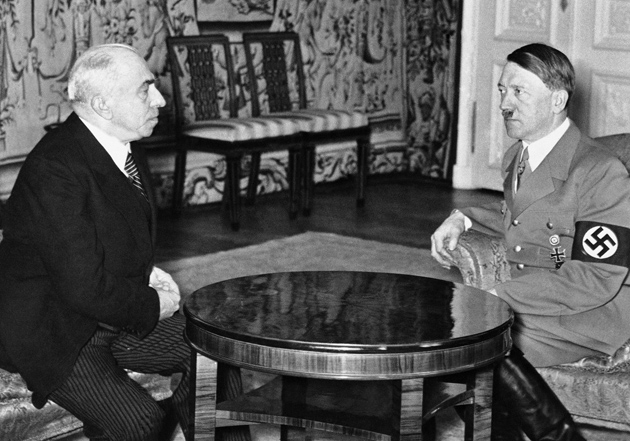 The tension increased significantly with the Reich up until the spring of 1939, when on 13 March the fanatical and shady anti-Semite Jozef Tiso, leader of the Slovak Popular Party, was summoned to Berlin by Adolf Hitler in person, who convinced him to vote for independence from the Bohemian capital in the Parliament of Bratislava, an ancient Slovak dream, which in Hitler’s view, served to weaken the Prague government.

Dressed in a dark tuxedo, on the evening of March 14, Hácha took the train to Berlin in order to avoid the German invasion of Bohemia and Moravia the following day. Having arrived in the capital of the Reich late at night, he immediately met the German Foreign Minister Joachim von Ribbentrop. It was Hitler who summoned Hácha, who however waited for the Führer for at least two hours. A diabolical strategy to further frustrate the President, old and evidently stressed.

While the old man waited, Hitler was watching a film. The Führer was fond of cinema and went to sleep very late. When it was revealed to the old Hácha, it was 1:30 in the morning of March 15th. Hitler was in a hurry, but even more so was Hermann Göring, the almighty and very corrupt number two of the Reich, present at the talks with the Czech President.

An ultimatum was practically presented to Hácha: the German invasion would take place in any case, but the elderly Prague-based politician could decide whether to cooperate or not. In the event of non-cooperation, the German air force would have destroyed Prague three hours later. After hearing the terrible intimidation from the Luftwaffe chief, Hácha had a heart attack, so much so that Hitler’s personal doctor had to give him an injection to make him come to his senses.

Practically powerless, Hácha agreed to collaborate with the Third Reich; the Wehrmacht marched into the Czechoslovakian capital in the early morning. France and Great Britain did not recognize the invasion of Bohemia and Moravia by the Nazis, but neither did they take sides with the “opponent” Beneš. This did not matter now: Germany could no longer be stopped; and less than six months later war was to return to the Old Continent.

The Second Czechoslovak Republic was dead; from March 15 Hácha formally became “President of State” of the Protectorate of Bohemia and Moravia, but to all intents and purposes he was a direct (or indirect) collaborator of the Nazi network. “For what I have done, the Nation will call me a traitor. But what other way could I have chosen? If I hadn’t done it, they would have killed us all”, confessed a troubled Hácha to his loved ones.

Although he despised the Gestapo, relations with Konstantin von Neurath, governor of the lands occupied from 1939 to 1941, were of forced coexistence, but not bad. Hácha attempted to denounce the work of total Germanization of Czech soil by the former German ambassador to London, as well as requesting the release of some prisoners and students who ended up in concentration camps.

Things changed on September 27, 1941 with the arrival of Reinhard Heydrich to replace Elder Baron von Neurath, who had been accused of not being tough enough on the Czech resistance. Heydrich imposed a climate of terror in the Protectorate, where he was much feared. Since the Blond Beast wanted to place his men in the ganglions of the state, Hácha, helpless, threatened to resign (without doing so).

The arrival of the architect of the Final Solution in Prague disrupted the whole region, which in accordance with the well-known Nazi resentment towards the Czech “inferiors”, became, thanks to its industrial conformation, the “factory” of the great Reich, as well as one of the Nazis’ favorite places for the raking up of Jews and other “undesirables”. On December 4, 1941 Hácha made a radio speech to the Czech people where he denounced Beneš, which was perceived by many as a huge betrayal.

After the attack and death of Heydrich, Germany knew that it had lost one of its best pieces on the chessboard of the new Lebensraum. To ingratiate himself with the furious Nazis, in late May 1942 Hácha opted to attack Beneš again via radio, describing him as the number one enemy in the country and responsible for the malaise of the Czechs. If the ex-president had not gone abroad, Hácha said, “our homeland would be the most blessed and peaceful place in Europe”.

With the arteriosclerosis of cerebral blood vessels escalating more and more, Hácha went to Berlin again to negotiate with Hitler, but the unexpected difficulties on the Russian front and the entry into the war in the United States made the Führer completely hysterical. Alone and humiliated again, Hácha returned to Prague and tried not to worsen the heavy situation that weighed on the Czech people by taking refuge in politics… of appeasement!

Hácha tried to passively please the Nazis, who in the meantime, had pulverized the village of Lidice and exterminated its inhabitants after Heydrich’s death. If he was already unpopular when he was elected President of the Republic in November 1938, over the war the Czechoslovakian partisans and many citizens saw Hácha as a sinister collaborator of the Nazis.

Hácha survived the end of the war in Europe on May 8, 1945, but five days later the Soviet troops occupied the now ex-governorate, and the jurist, prisoner number 3844, ended up in the prison-hospital of Pankrác, where he died on June 27, 1945. The funeral took place three days later; his remains are buried in Vinohrady. Some claimed it was murder, but Hácha’s health had been precarious for years.

It is difficult to formulate a unanimous historical judgment on the figure of Hácha: considered a collaborator by some and patriotic by others, he is certainly a controversial character. In a 1995 work about the President, the writers Dušan Tomášek and Robert Kvaček explained that he was first and foremost an unfortunate man who became president of a servant pseudo-state after a long German courtship.

Of course, Hácha did not have many alternatives. To save his life and avoid the German bombing of Prague he sided with the Nazis, although it is fair to recognize that he not only had to deal with the blackmail of the deadly Luftwaffe in the Prague skies, but in the meantime he had to handle the considerable and exhausting independence pressures of Slovakia, the attacks of Beneš from London and the current management of the state.

Tormented, sick and suffering, Hácha sincerely believed he had nothing to do with the work of the Nazis. He proved, or wanted to prove, he was reluctant to countersign the measures that were submitted to him by the occupants. At the same time, he was convinced that a temporary and partial collaboration with the Nazis would alleviate German aggression towards the Czechs. He was very wrong.

He played the part of the dangler who by force majeure allowed himself to be head of a puppet government, which does not exempt him from the political and historical responsibilities that inevitably come with it. In the Bohemian and Moravian governorate, he did not even command as de jure leader, let alone de facto.

Old and sick, he did not have the strength to choose the exile-resistance from London that Beneš, Charles De Gaulle and King Haakon VII of Norway among others chose. He was not an active and collaborative instrument with the Nazi regime like Tiso in Slovakia or Philippe Pétain in the Vichy government. On the other hand, was not as heroic as Christian X of Denmark who remained in occupied Copenhagen and openly challenged the Nazi regime.

Reluctant and weak for the role entrusted to him, Hácha, who could however resign, is remembered for having been a melancholic figure forced into difficult choices. He undoubtedly had a heavy weight on his shoulders but was not the only one in the Europe of the time. Tormented and run down, is he to be considered a traitor or a patriot? In reality, neither of the two: like many sovereigns, prime ministers, leaders of Europe in the 1930s, not only did he find himself involved in something greater than himself, but he did not prove himself to be capable of coping with objectively complex circumstances. 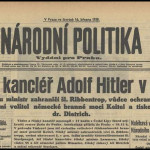