Fischer on visit to Rome, city of Treaties

The two-day Italian visit of the Czech Premier between Lisbon and the Concordat. Great satisfaction for the EU signature by Klaus, while the ratification of the treaty with the Church seems still to be quite far off.

The Czech Prime Minister, Jan Fischer, arrived on time  holding the Lisbon Treaty ratification documents under his arm and was greeted by the Italian Foreign Minister, Franco Frattini. Friday 13th, however, had a hand in this, as part of the delegation from Prague was held up in the Rome traffic. The consequence: Fischer and Frattini had to wait longer than expected for the official ceremony to take place. A set back which, however, did not upset the cordial atmosphere of the meeting. 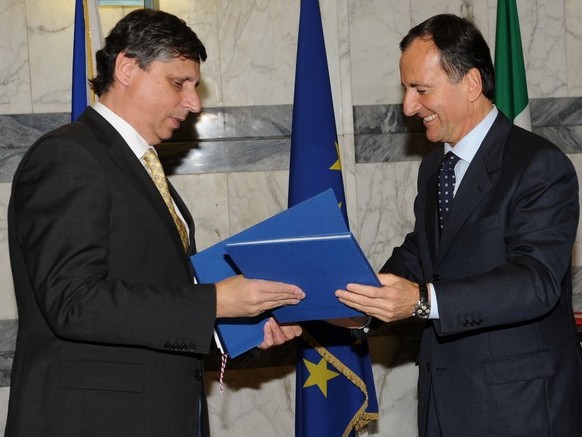 “After months of waiting, the Czech ratification has finally arrived”. That, at least, is what one seems to infer from the relieved expressions of Fischer and Frattini. “A historical moment”, said the chief of the Italian diplomacy, expressing his gratitude to the Czech Prime Minister for coming personally to Rome to hand over the tool of the agreement. The Farnesina Palace (seat of the Italian Foreign Ministry), contains all the ratification papers and texts of the European Treaties dating back to the 1957 Rome Treaty. A real vault of European legislation kept at the Foreign Ministry in the diplomatic contention hall.

“We are witnesses to this extraordinary event. It represents the end of a process, but also the beginning, because we now have to make the EU stronger”, added Fischer after delivering the ratification documents, while pointing to the signature of the Head of State, Vaclav Klaus. “The signature is there, I assure you!”, he remarked jokingly with a smile, to Frattini. A very relaxed atmosphere which ended with a toast and cordial handshake.

The leader of the Czech Government then went to the Pontificio Collegio Nepomuceno, a Roman seminary assigned to schoolchildren of Czech nationality, for a meeting with cardinal Tomáš Špidlík. A celebration was held there to commemorate the twentieth anniversary since the fall of the regime as well as the twentieth anniversary of the sanctification of St. Agnes from Bohemia. A very friendly meeting between Fischer and cardinal Špidlík, the ninety-year old Czech Jesuit, who has been living in Rome for nearly sixty years. Considered to be one of the greatest intellectuals of the Church, Špidlík is distinguished for his acute sense of humour.

Fischer dedicated his second-day Rome visit to the Vatican City, where he had a private audience with Pope Benedict XVI. Twenty minutes of talks with the Pope, during which a number of recent events and topics were also discussed, among which, social problems connected with the current economic crisis and the ever present danger of extremist ideologies. During a visit to the Holy See, Fischer laid a wreath on the tomb of John Paul II and cardinal Josef Beran, a Czech metropolitan and primate, once Archbishop of Prague, who is buried in the Holy Vatican caves.

At the end of his visit, The Czech Prime Minister met the Secretary of State of the Vatican, Cardinal Tarcisio Bertone. Speaking to the journalists later on, he made it clear that the role of his government – a technical executive that should be in office until next Spring – is to carry through the process of ratification of the Vatican Concordat: “My interlocutor” he said referring to Bertone “has shown to have well understood this situation”.