Home  »  Art and culture   »   Franz Kafka – the temptation of occultism

Franz Kafka – the temptation of occultism

It is not surprising that on his complex and prosperous journey of analyzing the human soul and the often illogical rules that govern the game of the existence, Franz Kafka – a key and emblematic figure of the twentieth century culture and author in the so called “World Heritage” circle – was confronted at a certain point with what could be defined as the “esoteric thought”. Then again, at a slightly deeper look we realize that it would have been strange otherwise, considering that particularly in the first decades of the twentieth century, Prague, the background for his personal and literary events, had many connections with the esoteric culture, and certainly not fortuitous ones, especially concerning the artistic and literary circles. 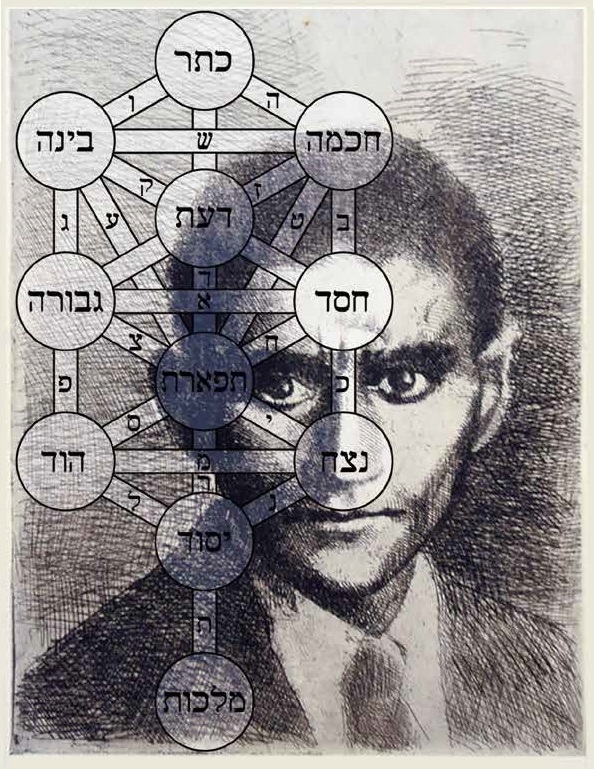 If we think about the cultural background of the writer, connected to the events of Jewish Prague, the suspicion of a possible relation between Kafka, his work and the Kabbalah tradition arises quickly. Many have tried to bring this connection to light. Among these, we can mention Gershom Scholem, the Semitic philosopher and theologian, an expert in Jewish mysticism, who attributes to Kafka’s writing “a kabbalistic sense of reality”. He even goes so far as to say that in a state of spiritual tension it is necessary to make continuous connections between the Bible, the Zohar (the most important text of the kabbalistic tradition) and the work of the Praguian writer. For Scholem, Kafka’s writings “express in a very laical form the sensitivity of Kabbalah itself”, which can hardly be contradicted, since many of the themes in his writings are also matters of interest for the mystic-Kabbalistic Chassidic research, typical for Central Europe. For example, the ones of the fall of the human being, freedom, the matter of good and bad, the task of humanity, and this certainly cannot be considered casual. In fact, in one of the pages of his diaries (January 16, 1922), Kafka himself defines literature as a potential “new esoteric doctrine, a kabbalah”, awarding this term the most appropriate meaning, considering the origins and the position of the writer.

Therefore, it should not be surprising if some scholars have sometimes searched through Kafka’s pages and identified forced links, seldom very clear ones, with the esotericism and some of its doctrines. It is beyond doubt that, for example, his own characters like the young man in “America”, the attorney in “The Trial”, the protagonist of “The Metamorphosis”, the land surveyor in “The Castle” are all in certain ways ancient and modern archetypes of a humanity confronted with the contradictions and mystery of existence whose inner meaning they are trying almost vainly to understand.

In the study “Kafka and Kabbalah”, Karl Erich Grözinger, a Jewish scholar, wrote that “The Trial”, both from a biographical and a thematic point of view, immerses its roots in the esoteric Kabbalistic tradition. He claims, among others, that characters like Josef K. and the land surveyor in the “Castle” could be considered “people who are aware of the meaningful connection of influences between the hidden and the visible world and who engage in the theurgy for trying to intervene personally in the process of such influences”. What about the adjective “kafkaesque” that indicates a situation typical of the writer’s characters, inspired by the absurdity and incomprehensibility of the circumstances they find themselves in? Even here, the references to Jewish philosophy, religion and esoteric doctrine are obvious.

However, beyond the exegesis, it is the same Kafka who in his diaries notes an important moment: a testimony of his relationship with the esoteric world, one that fascinates him but – at the same time – deeply disturbs him. Kafka was interested in Theosophy, he knew the works of Annie Besant and Helena Blavatsky, and had a certain attraction for this doctrine that spread rapidly around the world in those years through the Theosophical Society, which had a lodge in Prague since 1891.

On March 26, 1911, before having written the works that posthumously made him famous worldwide, Kafka took part in a conference in Prague on the occult physiology of Rudolf Steiner, the Austrian esotericist and theosophist who a few years later would establish Anthroposophy and who, at that time, was an active and prominent member of the Theosophical Society. Influenced by Steiner’s revealings and his charisma, Franz notes in his diary a few anecdotes and, as he testifies himself, a few days later, on March 28, 1911, he personally meets the theosophist at Victoria Hotel, on Jungmannstrasse. Kafka describes this meeting in all details and confesses on one side his natural affinity towards the theosophical doctrine, and on the other, the reverential fear he had for it. Kafka’s anxiety regarding the occultism derives from the concern that it could deepen him a confusing state that would further undermine his already “unhappy and confused” being. Franz confesses to Dr. Steiner of having experimented, through literature, some states of clairvoyance very similar to the ones described in the theosopher’s conferences, but it was not that particular state of consciousness to offer him the best literary material. Moreover, he added that Theosophy would not blend neither with his inner life, entirely taken by literature nor with his professional one, both already in great and irremediable conflict. Kafka wanted to meet Steiner, who, in those years, was one of the leading representatives of esoteric thought in Europe, and who had a great influence on literature, art, medicine and other schools of thought throughout the twentieth century, just to be advised by him whether to take or not the initiatory path.

We know that Steiner listen carefully to the young writer’s speech, but we are not sure what his reply was. Maybe the theosopher sensed Kafka’s qualities and intellect and he did not suggest any particular spiritual path to follow. On the other hand, it is not clear who or what could have been suggested in terms of spirituality or esoteric knowledge; like Franz Kafka mentions in a passage of his diary: “I have strongly assumed the negative of my time that is certainly very close to me and which I have no right to fight, but, in a certain way, to represent [...] I am a purpose or a principle”.

Remains only the interesting story of the meeting between two extraordinary men which have both equally and extraordinarily influenced the culture of the twentieth century and not only. Likewise, we have the certainty that in his own way, even Franz Kafka was also a high-grade initiate, a deep inquisitor of one of the greatest mysteries of the universe: the human being.