Home  »  Politics   »   The Czechs: these Eurosceptics

The Czechs: these Eurosceptics

Diffidence by the Czechs towards Europe. A bluff or a question of integration?
From enhanced cooperation to de facto exclusion: how to enable growth of the Union despite divisions

It is quite understandable that Czechs fear integration which necessarily includes rules. Frankly speaking, though, they seem less diffident towards the money which is coming from Europe for the development of the Country until 2013 and the advantages of the single market

Increasingly, in the last period, one denotes a certain annoyance, by a few member states, towards the European Union, its institutions and enlargement to other countries. Among these, the Czech Republic is perhaps the most striking example. European to the very bone, ancient Mitteleuropa cultural and political barycentre, among the new entries, the Czech Republic is perhaps the Country with the highest European vocation. However, every time the country has to face an issue involving the Union, this is followed by declarations of scepticism, or even opposition towards Europe.
It is as though the resentment and sense of occupation, once felt against the Soviet Union, had been naturally substituted, in the Czechs subconscious mind, by Europe and its institutions.
Consider for example, the position taken by Vaclav Klaus against the adoption of the Lisbon Treaty until its actual introduction.
Or even the rare enthusiasm towards the new Commission of Czech representatives in the European Parliament. Of the 22 Eurodeputies from the Czech Republic, only 11 said yes to the New Commission, while the European Parliament as a whole, had expressed an absolutely convincing majority (488 votes for, 137 votes against and 72 abstentions).
The Czech political world was also very cold, following the release of the “2020 agenda”, issued by the Commission. From Prague, critical words also came from the Foreign Minister, the Social Democrat, Martin Pecina, disappointed by the scarce support by the Union on the question of Visas imposed by Canada on Czech citizens.
These diffident positions find echo in other member States, above all from Central East Europe. We simply try to give an explanation and imagine possible solutions.

First of all, one must consider the peculiarity and history of the Country. On “El Pays”, Jiri Pehe, political analyst and director of the York University in Prague explains: “Since 1620, excluding a few exceptions, the Czech Republic has been a province subject to foreign powers. First Vienna, then Moscow…. And people ask themselves: and now Brussels?” 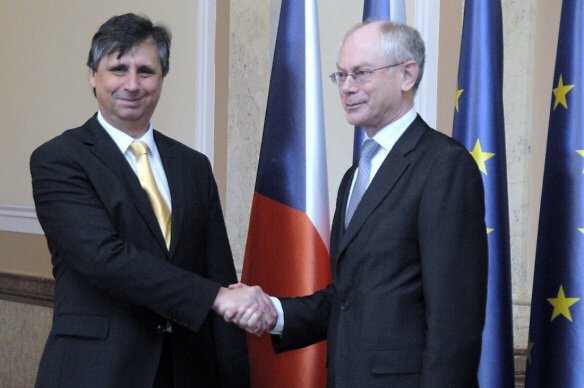 Perhaps this diffidence on the part of the Czechs, lies in their character: “I don’t believe that we are a country of Eurosceptics, but rather a sceptical country” explains Matej Stropnicky. It is therefore understandable that citizens are afraid of integration which, necessarily, carries with it the imposition of rules. Even if, frankly, they seem less diffident towards the money that is going to flow in from Europe for the development of the Country until 2013 and, the advantages of the single market.
In the history of European integration, though, antagonistic positions have always existed among citizens and within governments. Let us not forget that the European constitution was rejected by France, nor must we forget the independent position of Great Britain on the euro, nor the divisions on foreign policy and defence. Viewing it on the basis of this background, Czech resistance does not scandalize that much and is to be considered physiological.

There remains, however, the need for a clear reflection on the future of Europe and forms of integration. In foreign and economic policy, just as with other matters, divisions are still considerable. It is sufficient to consider the response to the Greek crisis which saw the lacerating division between France and Germany, two founding countries. The answer to the various doubts on the future, undoubtedly, depend on the political determination to heal all the divisions and proceed towards integration. Even if improvable, the Lisbon Treaty has granted us a Europe that can grow at different speeds. A group of at least 9 member States is in a position to give itself an enhanced cooperation on those issues where there is no unanimous consensus. The same thing applies to structured cooperation on defence policy, while for other sectors, such as the single currency, States may exercise exemption clauses or opting-out measures if they cannot or do not want to comply. Actual discussions are already taking place on enhanced cooperation regarding other issues. As for energy policy, a two-speed system has been proposed from various sides. Among them, the ex president of the European Commission Jacques Delors according to whom “The EU Countries are not yet ready to commit themselves towards a common policy on energy. But a small group of countries at the forefront could decide to proceed along this road without any further delays”. The same instrument is requested on divorce proceedings and Euro-Mediterranean relations. Moreover, integration may develop outside the EU and then be included into its legal framework, as took place for Schenghen. There is also the possibility of the withdrawal of a Country, or the “de facto” exclusion from the Union in cases involving violation of the Charter of rights. There is popular initiative, as a form of participation in decisions. The instruments are there for those who want to go ahead and for those who have longer times.
All that is needed for the moment is political will and a sense of responsibility. According to the President of the European Council, Herman Van Rompuy, the greatest impending danger for Europe is represented by the prevailing populism and, consequently, a lack of European compromise. This makes it difficult to adopt the necessary political measures for Europe’s future, measures which, in the next few years, will be necessarily unpopular.