College for young seminarians preparing for the mission as future Catholic priests, meeting point, centre of the religious, cultural and scientific life of the Czechs in the Italian capital. All this is the Pontifical Nepomucene College in Rome that this year celebrated its ninety years of existence and activity.

The history of the institute actually began before 1919, to be precise in 1884, when the Bohemian College, forerunner of the Nepomucene, was founded at the request of Pope Leo XIII, who after a few transfers established his headquarters in Via Sistina. “The Bohemians were never foreigners in this city” with these words John Paul II remembered in 1984 the birth of the Bohemian College, on the occasion of its centenary. “It is no wonder that my predecessor during the solemn hearing for the Slavs who came to thank him for the encyclical Grande munus on Saints Cyril and Methodius, expressed, on 5 July 1881, the desire for a college be founded in Rome for the children of the Bohemian ecclesiastical province”.

As one can perceive from the name itself, the institute was intended only for seminarians from the dioceses of Bohemia, but after the First World War and the birth of Czechoslovakia boys and men began to arrive in Rome intending to undertake theological studies also from Moravia, Silesia and Slovakia. “The capacity of the Bohemian College was not sufficient and so in the Twenties, at the behest of Pope Pius XI a piece of land was purchased and in 1929 a new building was opened which was given the name of the Czech saint John of Nepomuk”, says Tomáš Parma, vice-principal of the Cyril and Methodius Theological Faculty of the Palacký University of Olomouc. The new headquarters was, and still is, in Via Concordia, at number 1. “The Nepomucene is one of the oldest Czech institutions abroad, if not the oldest, still existing”, Parma continues proudly. “It is nothing short of amazing that it continues its activity from 1884 to today”.

There was certainly no lack of difficult moments, including the Second World War years. “Already in 1947, the Czechoslovak bishops, who until then had sent funding to the Nepomucene college for daily needs, no longer had funds to allocate to Rome”, explains Parma. “It seems that they sent a last wagon of coal and sugar, then the Nepomucene college suddenly found itself in a precarious financial situation”. 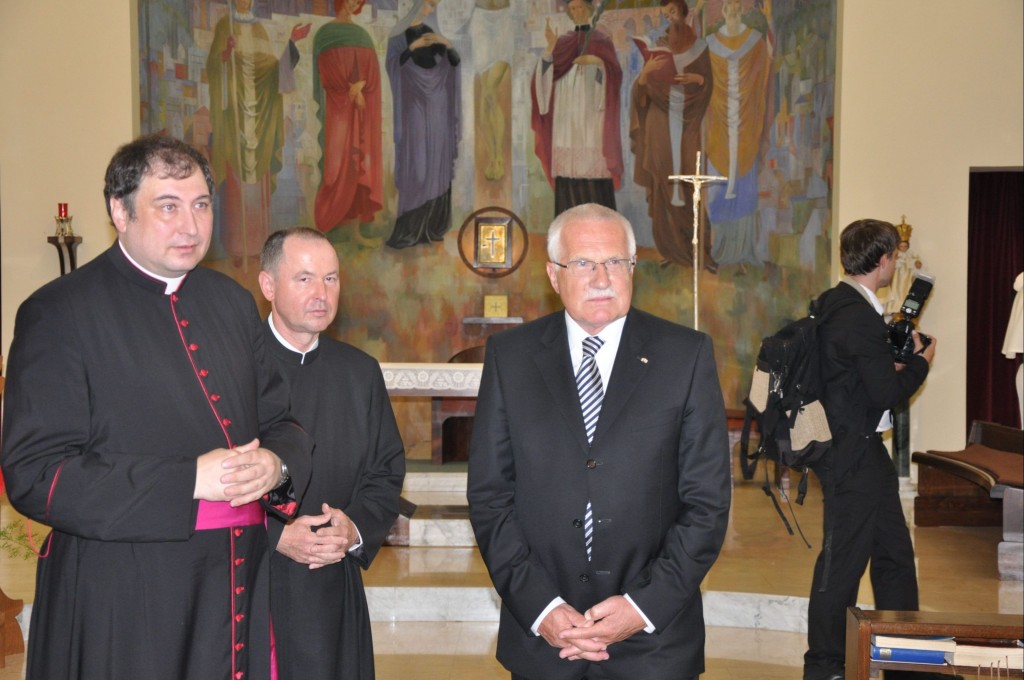 A refuge for Czechs

If finances were scarce, the number of seminarians grew instead, starting from 1948. “In the age in which your theology was taught in the spirit of the Enlightenment and in which the nascent Czech nationalism took on more and more anti-ecclesiastical and antipapal nuances, culturally and spiritually well-educated priests came out of the Bohemian College, devoted to the Holy See”, Pope John Paul II recalled a speech of his.

The era referred to was that of the post-war years. Communist totalitarianism and political changes in Czechoslovakia led many young people to flee across borders to become priests. At the College of Rome, they found refuge and the freedom to profess the Catholic faith. In addition to seminarians, the institute welcomed other Czechs, Catholics and non-Catholics, who had managed to cross the Iron Curtain but who after 1948 could not return to Czechoslovakia. A second wave occurred after 1968.

The Nepomucene college was therefore a place of support for the Czechs in exile, where spiritual care but also clothes, food and sometimes even a temporary job could be found. Some paid debts and contributed to the functioning of the structure.

The theologian and philosopher Karel Vrána deserves mention for the contribution he made to the College. He took advantage of every seminar held around the world to ask for support for the Czech seminarians in Rome and played a significant role in the foundation of the Christian Academy, a publishing house run by the cultural and religious centre Velehrad which published various magazines such as Studie and Nový život and in the years of the totalitarian regime published about three hundred titles of religious literature, in runs of thousands of copies, many from communist Czechoslovakia.

The Nepomucene college then assumed a key role in relations with Czechoslovakia and in the image of the country abroad. After ordination, many priests who left the Roman institute carried out their mission in the communities of fellow countrymen abroad, in Germany, England, Switzerland, Australia, the United States or Canada, thus allowing Catholic immigrants present in those countries to profess their faith in their mother tongue. Many others became part of the Czech clergy elite. Among the best-known former students are bishops Karel Kašpar, Josef Beran, Jozef Tomko or Karel Otčenášek.

Cardinal Josef Beran, archbishop of Prague, after having been interned in concentration camps by the Nazi regime and having spent fourteen years in prison during the communist era, arrived in Rome through the intercession of the Vatican and spent the years of his exile in the capital. He died at the College on 17 May 1969 and this year, on the fiftieth anniversary of his death, it was offered the opportunity to visit the room where he died.

To resume the historical thread, after 1989 the Nepomucene college went back to functioning exclusively as a college, with the exception of two brief periods in the early months of 1990 and 1993 in which it temporarily hosted the Czech Embassy to the Holy See. The institution is subordinate to the Holy See and guided by a rector, a vice-rector and a spiritual Father. The seminarians, who study at the Lateran University, are mostly Czech; in fact the interest of the Slovak dioceses in support of the activities of the Nepomucene college ceased after the division of Czechoslovakia in 1993. In 1961 the Slovak Institute of Saints Cyril and Methodius was also founded, and later elevated to the Pontifical College in 1997.

Priests and seminarians are staying in the main building, where there is also the large St. Wenceslas chapel, kitchen and laundry, the old town and the library. Next to it there is a smaller building with the porter’s lodge, occupied by the nuns of Saint Borromeo, who offer assistance to the inhabitants of the structure.

A centre of Czech culture and science in Rome

As we said at the beginning, the College is also a place of gatherings. It is home to the association “Associazione Praga” and once a month opens its doors to anyone who wants to take part in the Mass celebrated in Czech.

Among his main projects is the Scuola Ceca Roma (SCR), a nursery and elementary school opened in 2011 on the initiative of Kateřina Di Paola Zoufalová, who has been its director since the beginning. The children, coming from Czech or Italian-Czech families, follow a program based on the study plan of the Czech compulsory school and focused on the development of bilingualism, i.e. they learn the Czech language, culture and national traditions with insights on characters or important historical events and special initiatives such as concerts, trips and summer camps, or convivial moments such as the feast of St. Nicholas.

The Nepomucene college is finally also a scientific centre as it hosts the Czech Historical Institute of the Academy of Sciences, opened in 1993 and has been a member since 1998 of the prestigious International Union of Institutes of Archeology, History and Art History of Rome. Thanks to it, historians but also archaeologists, art or Czech literature historians come to Rome with scholarships and have the opportunity to do research in the archives and libraries of Italy and the Vatican.

Seminarians, children and scholars were able to take part in the celebrations for the 90th anniversary of the Nepomucene college in the spring. The official opening took place on April 23, 1929, the day on which Saint Adalbert of Prague is commemorated. This year, on April 23, it fell on the Octave of Easter, so the anniversary was postponed to April 29, when a solemn mass was followed by a concert of the Kolín Archi orchestra and a barbecue in the garden of the building. A due homage to this religious, cultural and scientific centre, which continues to be a benchmark for the Czechs in the capital after a good ninety years.