The homeless people of Prague

Over the years, in addition to state measures, the efforts of Catholic and lay associations have been decisive in trying to alleviate the suffering of the homeless in Prague

It was a Tuesday evening of early January at Vltavská, the Prague 7 metro station and crossroads of a series of city trams. All around a chaotic crowd of people coming and going, almost all heading home at the end of the working day. The temperature is still at two degrees, which is not exactly the best for the homeless. A little further on, is a small crowd of people waiting, some low tone voices. They are the homeless of Prague, overall making up a group of around fifty. At half past seven, four boys arrive, with large blue Ikea bags, inside of which are sandwiches, drinks, thermos flasks of coffee and hot tea which they distribute. The four belong to the community of Sant’Egidio and the appointment takes place here, every week at the same time. “They give us food and clothes”, says Jan, a homeless man, with an English who is anything but elementary. “I also went to University for few years, but then my life changed…” he says without adding anything else. He is thirty years old, but at first glance it is possible to consider him a few years older. A serious expression, clear eyes, a worn cap and jacket to protect himself from Prague nights, in his right hand a plastic bag from Albert supermarkets, with clothing and some sandwiches. Meanwhile, food delivery has begun. A Police car approaches, and decelerates, but only to take a look, and then resume its drive along the adjacent road. 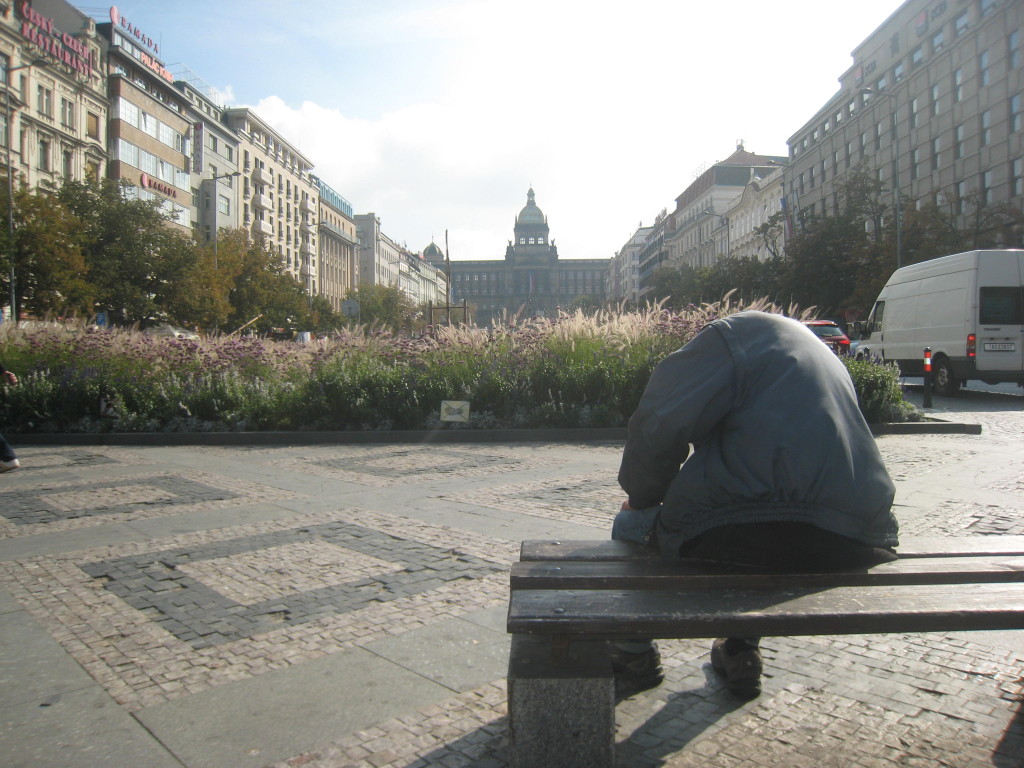 Another scene took place at a quarter past seven on a Saturday morning in front of Hlavní nádraží in Prague. A light snowfall slows down the movements of those who enter and leave the sliding doors of the Central Station. An Italian nun named Emanuela arrives and is immediately surrounded by a few dozen poor people. Following a group prayer, a kind of dance begins, with the nun distributing sandwiches, hot chocolate and sweets prepared just before, at dawn, together with the sisters of the small Franciscan Community of Prague Radotín. All collected thanks to the generosity of a group of Italian entrepreneurs. “We are the only ones doing this here”, Sister Emanuela tells us “for several years, from Monday to Friday we offer the first meal of the day to these people, many of them spend the night in public dormitories that often ask their guests to leave the spaces at six in the morning and at seven I am here to give them food and words of comfort along with a prayer”. Twice a year, the same sisters distribute bags containing soap, toothpaste, a toothbrush and paper tissues along with something to eat.

Particularly in the surroundings of Hlavní nádraží in Prague, there is a constant coming and going of homeless people, backpackers, worn hands and swollen faces. Holding green plastic bottles of cheap beer, an emblem of an addiction that is often the cause of street life. Speaking of addictions, alcohol is widespread among these people in a country like this one, where beer often costs less than water. Then there is an unknown number of substance addicts, such as the notorious pervitin or piko in slang, the most used in the Czech Republic. The substance capable of driving away sleepiness for days and releasing dopamine into the body, is a drug that literally destroys the body which abuses it. The piko is easy to find and its very affordable cost make it a plague that has led many people onto the road.

According to research conducted in 2019 by the Výzkumný ústav práce a sociálních věcí, i.e. the Research Institute for Labour and Social Affairs, an institution that deals with analyzing the feasibility of government policies in the social field and studying changes in society, in the Czech Republic there are 24,000 homeless people, 2,600 of whom are minors and 70 percent men. The survey conducted by analyzing, among other things, about 250 reception centers, 188 hospitals and 35 prisons, showed that around a tenth live in Prague.

The data have been confirmed by Kristina, one of the leaders of the Sant’Egidio community in Prague and volunteer for 19 years. During a meeting at the headquarters of the community in Žitná street, in a room used for the occasion as a projection room via a television and several chairs, Kristina told us in an excellent Italian that today the community can count on about forty volunteers in the capital, many of whom are very young. “We manage to help about three hundred homeless people, our philosophy as a community is based on the principle of friendship and brotherhood towards the poor, towards those with the least. We are traditionalists not in the sense of conservatives but intended as a reference to the origins of the Church, when it consisted of a refuge for the world’s poor”. Michele, an Australian of Italian origin, residing in Prague, also attended the screening from Sant’Egidio, who prepares lunch for the homeless at Central Station every Saturday. “We cook pasta with sauce. Unfortunately, we do not have Parmesan and if some Italian donors could make some available, we would be happy to be able to offer a 100% Italian dish” he suggests.

Among the various activities of the community of Sant’Egidio we highlight the personal visits to the homeless on Monday, the collection of clothes at the headquarters, as well as the picnic for the poor organized every summer in the park near the Hlavní nádraží station. The main annual event is the Christmas lunch for the poor which takes place at the Archbishop’s Palace in Prague. Let’s not forget the visit to the elderly at the Kobylisy retirement home on Thursday, a voluntary activity that has been carried out since 1993, therefore since the arrival of Sant’Egidio in the Czech Republic. “Here the founder of the community was Paul Habart, in 1993. Initially, there were ten of us, and we mainly looked after the elderly in a hospice in Dejvice. We went there to look after them and help them overcome loneliness, an element that is common to the elderly and homeless”, says Kristina.

Another organization dealing with the poor is Naděje (Hope), an NGO with a program dedicated to the integration of the excluded, active since 1990, as reported on the association’s website. In Prague, the NGO manages shelters open 24 hours a day, seven days a week, with a total capacity of 145 beds, as Gabriela, head of public relations, told us. “We manage four reception houses, including one where we take care of the elderly and the sick, we also run two dormitories with 40 beds each, together with two day centers where you can take a shower, refresh yourself and receive support from our social workers and psychologists”. While speaking with Gabriela, it emerged that more than 10% of the homeless are people over the age of 65, and that average age has been steadily increasing, especially in recent years.

The organizations that deal with this type of assistance are also others. We remember for example the Salvation Army, the international evangelical movement that landed in this country in 1919. Strongly limited during the Nazi occupation and completely banned during the communist regime, the Salvation Army was reborn in Prague in 1990 and currently operates throughout the Czech Republic.

Also worthy of note is the organization “Medici na ulici”, made up of a group of undergraduate university students in the medical faculty of Prague, who for four years now have been operating directly on the streets of the capital, visiting and offering basic medical care to the homeless, who they could hardly afford this type of assistance in normal clinics.

As for state measures, a document called “National strategy to fight the phenomenon of homelessness and housing exclusion”, to fight against causes and prevent the situation from worsening dates back to 2013. Among the various objectives set was “the reduction in the number of people and families at risk of losing their homes, the reintegration of those who live in poverty”. The results should have been seen this year, but they seem to have been very few. Until now, efforts by Catholic and secular associations to alleviate the suffering of the least continue to be decisive. 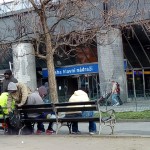 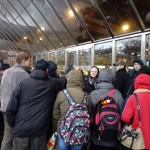 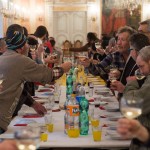