The Czech Republic’s heart of coal is beating still

This is still a coal-powered country. The raw material that was set as a symbol of the Industrial revolution remains fundamental in the Czech energy mix

Just like the Spartans at Thermopylae, there were about three hundred environmentalists who animated the event Limity jsme my (The limits are us) at the beginning of last summer. The place: Bílina, the maxi surface mine located in Northern Bohemia and owned by Čez, the state-owned energy company. Part of the activists, in their white overalls, have even managed to chain themselves to the digger, preventing them from working that day.

How far the digging goes

“Climate change begins here – declares the movement composed mainly of young militants – the coal moguls earn millions of crowns (billions in reality, ed.), while climate change damages fall on the weakest, namely among the Southern countries of the world”.

The activists’ objective is very pragmatic: defending the tracks of land that the huge diggers would swallow, widening the extension of the mines out in the open. 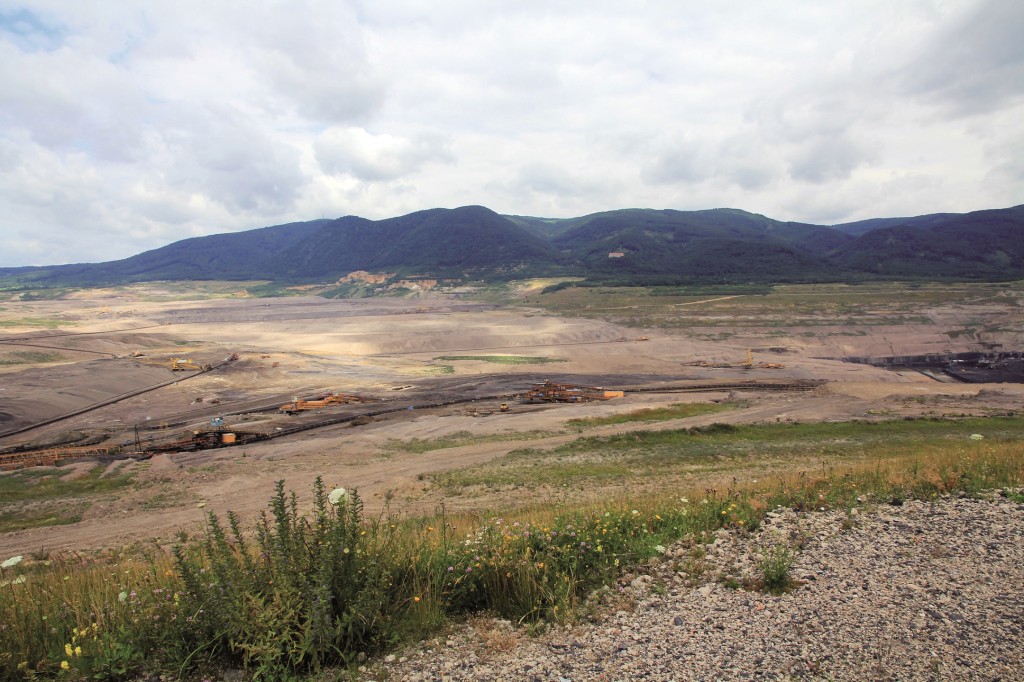 To the date, the expansion of lignite mines is limited by a government decree issued in October 1991 by Petr Pithart’s executive, when the first post-communist government decided to place a limit on coal mining. There were mainly environmental requirements that were acting at the time, reaching European record levels in these parts. The lignite mass extraction was seen as one of the wrongdoings of the deposed power of the Communist Party; the strength of the social groups linked to coal, trade unions and companies in primis, was in free fall and the existing limits were sufficiently generous not to provoke immediate rallying. However, during the last few years the pressure to revoke the limits has grown, both from the economic actors and from the regional policy. Until now, the governments have not given in. The only exception is the Bilína mine, whose borders have been altered on two occasions, in 2008 and 2015. In that case, the government played pro domo sua, as the mine is part of Čez energy group, 70% being state-owned.

The independents were left instead high and dry. The most active among these in the battle against the existing limits is the billionaire Pavel Tykač, owner of the Severní energetická group, whose main mining site, Lom Čsa, rises not far from Most and Litvínov, in the Ore Mountains.

Lom Čsa should wind down by 2024, if it were not for the existent reserve beyond the set limits estimated at about 750 million tons of coal corresponding to about 20 years of extraction throughout Czech Republic. Should the limits be extended, Horní Jiřetín, the village that has become one of the symbols of this battle would most likely disappear from the face of the earth. However, an even more serious matter is the large hole that would come as close as 500 meters from the town of Litvínov. Záluží, the largest chemical center in the country, is also at risk.

The public voices are not univocal. While for some people the activists, who want to maintain the limits, are simply “eco-terrorists”, others have a more critical approach than what the large mining groups declare. As the extractive activities are approaching an important center such as Litvínov (24.000 inhabitants), the consequences begin to be felt. For example, real estate values fall as the distance from the mine decreases. From an economic point of view, it is an advantageous vicious circle for mining entrepreneurs. Houses lose value at a mere mentioning of the expansion of the mine, being at this point easier to buy in exchange of a property in a slightly more secure and prestigious area.

Czech Republic is still a coal-powered country, regardless of its tendency to dismiss it. The raw material that was set as a symbol of the Industrial revolution remains fundamental in the Czech energy mix. According to the official statistics of The Energy Authority, the coal power stations represent about 48 percent of the entire electricity production in the country. The nuclear power plants follow at a considerable distance. Even more, the share regarding the heat production is at about 70 percent. The share of the coal has been declining in the last few years but, regarding electricity, it remains twice the EU average. The same argument also applies to the extracted quantities. Nowadays, we are far from the 95 million tons of lignite a year from the mid-eighties. However, after the collapse of the eighties and nineties, the production stagnated just under 40 million tons of coal per year, registering a slight increase in 2017.

The lignite extraction is fundamentally connected to the production of electricity, to extent that several companies in the sector, starting with the largest ones – Čez and Severní energetická – have their own mines and coal-fired power plants.

In the national energy strategy, a strong decline in the production of electricity from coal sources is expected starting from the actually estimated 41,000 Gwh to just under 15,500 Gwh in 2040. Nuclear energy should be the first one to take the place of coal, while natural gas and renewable sources only to follow. However, considering the delays that mark the Czech nuclear energy due to planning and financing matters and a certain detachment of the local energy sector comparing to natural gas, it is possible that coal will have a greater role in the future than the one projected by official documents.

Moreover, while looking abroad, the Czech coal moguls are counting precisely on this. Many international energy groups are about to get rid of their bad image creating coal-fueled sources at bargain prices. The most striking example is the acquisition of the German branch of the Swedish group Vattenfall (lignite mines and plants in Saxony) by the group of Czech billionaires Daniel Křetinský and Petr Kellner. For a small amount of euros, the two Bohemian billionaires have put their hands on a 3.4 billion euros asset, half of which is made up of an escrow account for post-extraction environmental rehabilitation. Instead, the Swedish company had to report a massive loss to its balance sheets but was able to boast about having decreased its emissions.

“The Eph company is convinced that coal will continue to play an important part in the transit technology, ensuring a safe and uninterrupted electricity production”, explained Křetinský group. The latter underwent similar operations even in other European countries, although not so extraordinarily convenient. These include Italy, where Eph bought five coal-powered plants from the German group E.ON.

Even though accomplished due to bank loans, the logic of these operations is speculative. Czech investors are aiming for a rise in energy prices in the future, on a progressive break from the investors in renewable sources (and the image recovery of dirty sources) and above all on the unattainability of the ambitious objectives of energy conversion plans, such as the German EnergieWende. It is believed in Prague that the European governments will eventually have to continue to turn to lignite in order to guaranty the electricity supply at the continuity standards to which the twenty first century is accustomed. The most dangerous competitor in this game is the natural gas that enjoys a clear and more acceptable image in Europe. One of the biggest wagers of the major Czech energy investors is that gas cannot completely replace coal.