To the discovery a popular district in Prague which, in the last few years, has embarked on a new development path

Going along the busy Francouzská street, that, after a short distance from Náměstí Míru, steeply descends the south-east side of the hill, on which there is the famous and elegant district of Vinohrady, after a few steps we come to the Administrative district of Prague 10, where we discover a fascinating and interesting area to be explored: the centre of Vršovice.

The first records of this district – that borders to the north with Vinohrady, southwest with Nusle, to the south with Michle and to the east with Strašnice – date back to 1088 in the foundation document of the Vyšehrad Collegiate Chapter dedicated to the Saints Peter and Paul.

The first settlement at Vršovice took place at the same time as the one in the valley of the Botič torrent, at the time of the first royal allocation on the hill of Vyšehrad. Among the many nobles who possessed this territory over the centuries, there was Pražan Stuka, who was lord of the land between 1311 and 1328, who later sold the entire village and possessions to the Order of the Teutonic Knights. The Germanic order of chivalry built a stronghold in this area, that soon became an active centre for trade and economic life.

After the accession of Emperor Charles IV of Luxembourg, the area was transformed into a large vineyard and during the centuries that followed, the land was repeatedly sold or transferred to various other nobles. Over time, because of the many wars that took place there in the Middle Ages, Vršovice was repeatedly damaged or destroyed as a result of battles, such as the one that took place at the time of King George of Podĕbrady.

However, it was only in the eighteenth century that Vršovice began to prosper again and become an important agricultural centre and due to new cultivation techniques introduced by landowners, it distinguished itself for the prosperity of its vineyards and orchards.

It is interesting to note that in the nineteen-seventies, over 3,500 people were transferred to Vršovice from the military area of Milovice (central Bohemia, about 50 km north-east of Prague). They consisted mostly of Czech soldiers, with their families, who were moved to the Czech capital, in order to leave space in the village for the settlement of Soviet troops, following the invasion of Prague in 1968.

Today, with almost 37,000 inhabitants and a surface area of 2.94 square kilometres, besides being one of the most densely populated neighbourhoods of Prague, Vršovice is among the first to have started a new phase of development that looks very promising for its future.

More and more Czechs, but also many foreigners who wish to buy a house in Prague, tend to choose this area, due to the relatively lower prices – compared to the more central areas – and because they are aware of Vršovice’s great potential.

From an architectural point of view, the area has elegant twentieth century buildings and mansions that are among the most beautiful in Prague, with their facades and Art Nouveau decorations full of floral motifs, pastel colours and depictions of characters and important events of Czech history. Although not all of them have been refurbished yet, some of these buildings still display the decadent and suggestive charm of their past magnificence. In a number of areas of this district, not far from the centre of Prague, it is still possible to see a few abandoned villas and stately homes which, in the silence of luxuriant and impenetrable gardens, lay waiting to be renovated and show off the splendour and magnificence of the past.

This suburban decadent charm, that is about to relive a new era of prosperity, well combines with the new cultural ferment of the town that has taken root here, especially around the streets of Krymská and Francouzská, that are full of workshops, cultural centres, small cinemas, cafés and restaurants, many of which are in retro-style and that have become a meeting place for “hipster” youngsters, a subculture that, as in other European capitals, has taken root also in the Czech capital in recent years.

Krymská, in particular, has become increasingly famous for its nightlife and even the New York Times has written about it as one of the twelve most lively and interesting streets in Europe, in a list that also includes the Paris Rue de Charonne, the Milan Ripa di Porta Ticinese and the Berlin Rüdesheimer Strasse. But, beyond the rather overstated American newspaper evaluation, it is true to say, though, that until a few years ago Krymská was considered an unsafe place that even its citizens would have advised you to avoid. Today, instead, things have changed considerably. Casinos and bars of dubious reputation, and even the dens of petty crime, have given way to local shops that, especially in the evenings, are busy and full of young people. In May this year, the third edition of Korso Krymská, a popular street festival, was held there.

Among the monuments and buildings of particular interest in Vršovice, there are: the Husův sbor, a Hussite church located in Vršovické náměstí, whose 26 meter high bell tower resembles a lighthouse, and that was built in 1930 in just over nine months thanks to pre-assembled materials; the church of St. Wenceslas at Čechovo náměstí, an example of functionalist architecture by the architect Josef Gočár; the baroque church of St. Nicholas, originally built in 1374; the neo-Renaissance building of Vršovická záložna and the Vršovický zámeček that belonged to the Italian textile entrepreneur Giuseppe Rangheri, a distinguished member of ancient Italian Congregation of Prague. 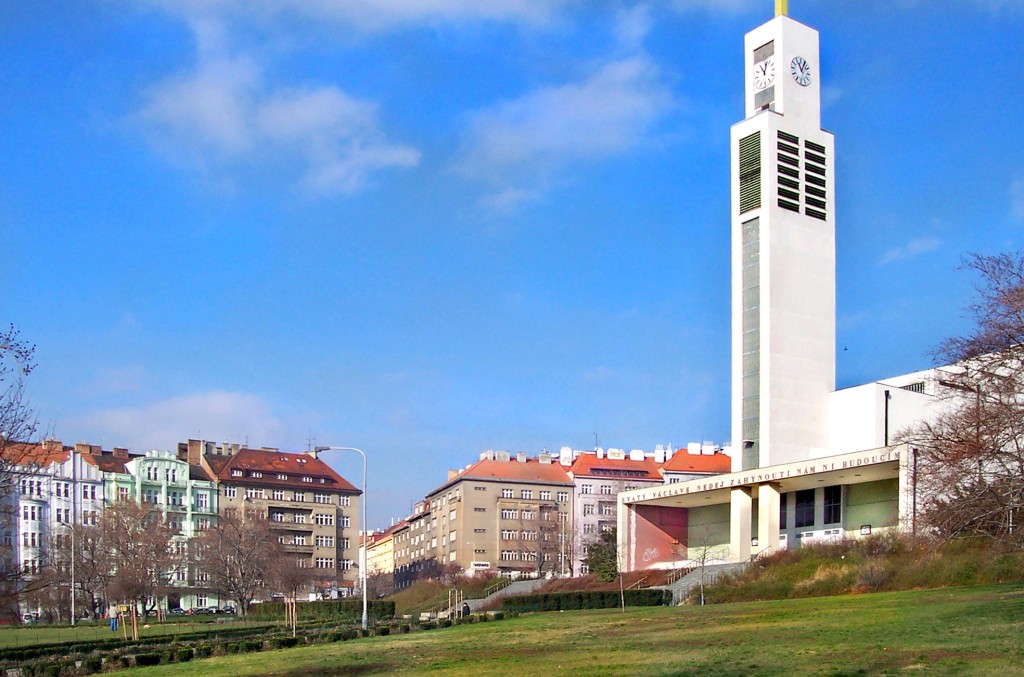 The district includes the Praha-Vršovice railway station, the large Eden shopping and the Koh-I-Noor Waldes, an historic Prague company that produces textile products and haberdashery (not to be confused with Koh-I-Noor Hardtmuth, the famous Czech company that produces pencils and art material). The Koh-I-Noor of Vršovice owes its name to Jindřich Waldes (1876 – 1941), the Czech entrepreneur of Jewish origin, known for his patented snap (pressure) buttons, which at the beginning of the last century achieved great international success and sold all over the world.

It is also inevitable to remember the two important Vršovice sports centres. Firstly, the historic Ďolíček stadium, built in 1932 with a capacity of 7,000 seats that hosts the home matches of the Prague “Bohemians 1905” team that plays in the Czech first division football championship. Then the brand new Eden Aréna stadium, which also hosts, among other things, the home games of Slavia Prague, as well as the Czech National football team. The plant, with a capacity of around 21,100 spectators, is the most modern stadium in the Czech Republic, the only one in the Country that belongs to the UEFA 5-star category.

With a constantly growing economy and an ever increasing demand for services and living space, Vršovice is set to respond fully to the needs of a modern and multicultural capital such as Prague. A discreetly charming neighbourhood, that is functional and open to new opportunities, but also cautious to create a fertile ground for the development of the city’s culture and that is able to satisfy the old and the new requirements of the Czech capital’s dynamic population.