Just a few weeks ago we heard about the news of the imminent start of works for Smíchov city, an ambitious project that intends to transform the area between the train station, Smíchovské nádraží, and the bus station, Na knížecí, into yet another mixed residential center with offices which increasingly appear in various parts of the Czech capital. And it can be there as well because, of all the districts in the center of Prague, Smíchov is the one that has benefited least from modernization works, like those that partly transformed Holešovice and almost completely, Karlín.

To tell the truth, this area – which is the best known in the Prague 5 district along with Barrandov (the Czech Cinecittà) – hasn’t really changed much in a long time. In the area around Anděl metro station, between the Vltava and the railway, we find apartment buildings from the early 1900s, often sought after for the river view they offer. Then, over the railway, there is nothing. Uncultivated fields (such as those that will house the above complex), remnants of factories and the very gray Nádražní and Radlická streets. Going down on the first of these two we arrive at the edge of Zlíchov, once a district in itself but now part of Smíchov. As we move away from the center, we find that the situation worsens visibly.

It’s not far away, it’s enough to take the tram for one stop from Smíchovské nádraží. On the left side we find industrial buildings among the crumbling and ruined ones. On the other hand, on the right, there is the railway and the building that houses the MeetFactory artistic center, a solitary building in the middle of everything. This structure is easily recognizable due to the two fuchsia cars hanging on the sides of the entrance, the work of the sculptor David Černý (owner of the place). We must say that the MeetFactory fits in very well in the context of industrial decay reigning above the area. Not that it takes much, it was enough to heavily renovate the interior and leave the exterior as it was.

Things went worse for the building in front of it, namely Lihovar of Zlíchov. It’s a large alcohol distillation plant (líh). It comprises a series of buildings that, surprisingly, are all still standing (the real question is rather how do they stand).

There was already a distillery in Zlíchov at the beginning of the 19th century and was owned by the Fischl family. However, the present complex was built under the guidance of Samuel Fischl and Adolf Rosenbaum, between 1880 and 1907. At that time, the production of alcoholic beverages knew a real boom throughout the Austro-Hungarian Empire. In fact, it was discovered that molasses, a waste derived from the production of sugar, could be used to produce alcohol. Many distilleries and brands were founded in those years, some of which still exist, for example the Austrian rum Stroh and the Czech Tuzemák.

Given the increase in competition, Samuel Fischl must have probably considered to follow suit and transform the old family distillery. For example, the chimney that still dominates the industrial complex was built between 1880 and 1907. But that’s not all, there were also various innovations in the production process. The waste from alcohol production was based on potassium, so a refinery was added where potassium was recycled to produce salts.

In the early 1900s, the distillery’s tanks produced over 28,000 hectoliters of alcohol per year. Back then, the factory was also connected to the Smíchov railway station. It was the third lihovar in Prague. Then the story is similar to that of many other buildings covered in our articles dedicated to the abandoned Prague.

In 1939, with the Nazi occupation, the plant was confiscated (Jewish owners) and after the war it was nationalized. It stayed closed until 1952, when the communist regime transformed it into the headquarters of the company “Spojené lihovary, národní podnik” (United distilleries, national consortium). And this wasn’t the only change introduced by the new regime: in 1957, the potassium refinery was converted into a vinegar production plant. A good choice, given that in the 1970s the plant was one of the main vinegar producers in Europe. But when did the crisis begin?

Simply said: when the production was gradually abandoned, until 2000, the year when the plant was closed down and abandoned. Soon, just two years later, the Cultural Heritage Authority declared it protected site, but there wasn’t more it could do. So, the factory remained abandoned and increasingly in decline. In 2013, the roof of one of the buildings collapsed even (just below the chimney). The company that owns the complex, Zlatý lihovar, stayed inactive for a long time concerning the works. On the other hand, the City Hall of Prague 5 is trying to resolve the situation: in fact, it can’t be a coincidence that in the last year the tram line between Smichovské nádraží and the distillery (even the one in a pitiful state) was renewed and that the Lihovar tram stop has been completely rebuilt, and more so with a concrete block that commemorates the previous distillery.

However, near 2015, the Zlatý lihovar started to become more present. At first, trying to find a renovation project with some group of developers, who presented a proposal to the Municipality for the conversion of the factory into a residential complex of 500 apartments. The idea is a little baffling because being close to the railway that connects Prague, Plzeň and Munich (but also to an active cultural center), the area cannot be the quietest. However, the residential complex should also include a nursery and a multifunctional playground.

Additionally, the project should maintain the structure of the main building and the distillery chimney – the only two things that don’t seem to have a high risk of collapsing. But the “should” in this modernization plan is particularly mandatory: there have been no news for almost two years. However, it’s clear that Prague 5, and in particular the Smíchov-Zlíchov cadastral unit, is the next prey of Prague gentrification. It offers the right mix of early 1900s homes, brownfields and things that fall apart. And the presence of those vintage houses suggests that the gentrification could be of the Karlínian type. Because Smíchov, after the restyle of Karlín, is in fact one of the districts with the greatest architectural decline in the center of Prague. A neighborhood that certainly is in need of renovation. But the way to achieve this will make the difference. 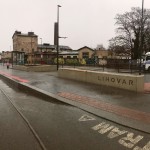 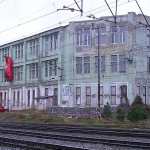 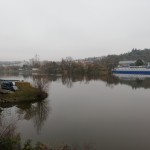