Home  »  Prague and surroundings   »   The nice and forsaken riverside

The nice and forsaken riverside

Discovering the Prague 7 area on the Vltava river bend

The Líbeň bridge and the Negrelli viaduct. The Marina residential complex and the Holešovická tržnice market. The Cross and the SaSaZu. The river port. The spicy lights of the ShowPark. Despite its appearance, Holešovice is a district that hides many contrasts, also due to its atmosphere of “seaside village”. And for the most part, these contrasts appeared especially after the 2002 flood, during which this area on the bend of Vltava was largely submerged, damaged, and rebuilt. But not nearly as completely as the neighborhood facing it (Karlín). And this is perhaps a good thing, because the reconstruction of Karlín brought along the alienation of its original atmosphere (“it has a particular flavor, the air is like quicksilver, it has a beautiful scent”, sang Ivan Hlas in 1993).

However, before talking about the reconstruction of Holešovice it would be good to remember where exactly is situated. Or at least try because, here as anywhere else, the Praguian land-surveying is a matter of opinion. In fact, for a long time this patch of town was merged with the adjacent Bubeneč. The two districts became part of the Czech metropolis in 1884, hand-in-hand, as Bubny-Holešovice. And still today these two areas represent Prague 7. More so, there are people who believe that Letná itself is part of Holešovice. However, these are two different areas and the dividing line, which runs from Strossmayerovo náměstí to Výstaviště, corresponds to Dukelských Hrdinů street. But the area lying to the east and reaching the bend of Vltava is Holešovice. The one on the west is Bubeneč. Then again, looking at the maps, Holešovice goes all the way to Letná park (but does not include it).

However, if walking between Letná itself and Štrossmayerovo náměstí you will notice that Bubeneč appears on some of the street plates. Once you passed the Vltavská or Vystaviště Holešovice stops, the difference between one area and the other is evident in all respects. After gentrifications and land registry divisions, if you go straight towards Letná, you will find yourself in a mid-class residential area. On the other side, it’s all mainly an office area, with square buildings, anonymous and even a little dirty.

Let’s go back to 1884, the year of the urbanization. At the time, the area was a real buzz for more than 30 years, as a port (Holešovice) and a station (Bubny) were build there in 1850. This made the area one of the many industrial and trading centers around the city.

From there, for some time, there was a flourishing of factories, also because the port – and it couldn’t be otherwise – was innovative. Therefore, it was no coincidence that Vystaviště, the center that hosted the Universal Exhibition in 1891 was built there. The district maintained its popularity even under the communist regime, as proven by the names that the streets still have today. And it remained an industrial area, so much so that a song by Petr Skoumal dedicated to Holešovice says “but if you plant a tiny tree, they will call you crazy”.

It is also true that the Holešovice riverside has never experienced a real visible decline, but a rather slow and gradual one. As the port was losing its importance (and the station was closed in favor of the smallest one, Nádraží Holešovice), the neighborhood progressively deteriorated, becoming a low-cost and poorly maintained residential area. Finally, the 2002 flood seemed to be a coup de grace.

Indeed, it was an opportunity for a new beginning: the reconstruction projects arrived, and the second youth began for the whole riverside area. In 2009, the Marina complex with apartments and offices was completed, nearly fully converted from the now destroyed port. In the landscape of the port, among rust, cranes, structures left intact, and ship carcasses as decoration, this classic collection of the twenty-first century paneláky fits quite well. Certainly, the contrast between the new and clean things and the old and rusty ones remains a bit blatant, but the industrial atmosphere remains intact. The part of the port that was not transformed in a hipster area is still functioning as a storage space and while walking through it, the feeling of discomfort is still powerful. As if this was not enough, most of the industrial buildings have been converted into cafes and artistic spaces (Jakta 79, Vnitroblok, Dox and so on).

So, did the gentrification win and are we all satisfied? Not exactly, as there are several areas to be reconstructed. Ortenovo náměstí is still under a blanket of malaise. If zastavárny (or pawn shops, if you prefer) would appear on Komunardů Street, that would be fine too. There is nothing on the west side of the Argentinská street. In these areas, on Dělnická street, at the Cross nightclub, at the local market (Pražská tržnice) and down from there you can still feel the original atmosphere of the neighborhood. This doesn’t mean that some things can be left as they are. There are two in particular: the bridge leading to Líbeň and Pražská tržnice itself.

As proven by various technical studies, the bridge has structural problems that can be summed up as follows: it’s difficult for it to stand for a long time, and easier to tumble. In 2018, there were rumors about closing it down for two years, tearing it down and building a new one. This was difficult to implement, given that it’s an overpass traversed by many trams and leading to the always busy Palmovka junction. After that it was noticed that trams can also pass over it, as long as they run within a certain speed limit, which can be quantified more or less in “if you walk you can overtake them km/h”. Therefore, the traffic was reopened (within a month). The proposal is now to renovate the bridge, but the only news we read doesn’t mention anymore temporary closures to verify “its solidity” but actual maintenance.

As for Pražská tržnice, on the other hand, Covid-19 interfered. In fact, the characteristic market stands should have been renovated and reopened precisely during 2020 but the pandemic has postponed everything. Some buildings are starting to open only now – in August it was the turn of the “hall 40”, transformed into a workspace for digital development companies on the second floor and a multipurpose center on the first one. The tržnice area remains, however, a territory of battles, legal rather than architectural ones. It’s well known that one of the pavilions houses the ShowPark nightclub, in fact a brothel, and very popular among tourists. Obviously, the company that manages it, Eroc, has no intention of giving up the business. This has resulted in the well-known dispute with the City of Prague, and there is no end in sight at the moment.

In fact, in any case, the unfinished gentrification puts the riverside of Holešovice at a crossroads. One path leads to a complete transformation, the distortion of the unrefined but original industrial-seafaring atmosphere. Briefly, it leads to an evolution similar to Karlin’s. On the other hand, there is a Žižkovian type of gentrification, meaning, one that does not alter the soul of the area too much. Certainly, Holešovice lacks the antenna, the building that brings the “Eiffel Tower effect” and connects the old and new inhabitants and creates a sort of “independent sub-community” in Prague.

The historic buildings are not missing in the eastern half of Prague 7, and many of them are factories or industrial complexes. But there is nothing iconic about it. And judging by how the port area was handled, it’s easy to understand that the entire riverside has already been heavily modified. The fact is that there was too much freedom in the reconstruction interventions, perhaps because the flood permanently damaged many buildings. On the other hand, in Žižkov you can’t even put plastic windows in the places that weren’t affected by the flood.

Will Holešovice eventually end up having the same fate as Karlín? The recent news that the two districts will be connected by a pedestrian bridge doesn’t make us keep our hopes up. 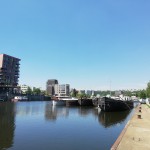 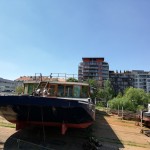 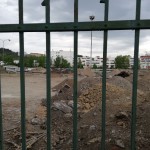