The mystery of the Nerudas

Legend recalls that Pablo Neruda chose his name in homage to the Czech master Jan. But the truth could be another
On September 23, 1973, Pablo Neruda died in mysterious circumstances, leaving the puzzle of his name unresolved

On a summer morning, Nerudova street is full of tourists that move agitated from Malá Strana Square towards the Prague Castle. A local guide, with a powerful accent, explains to a group of Spanish that the street is named after the Czech poet and writer Jan Neruda, pointing out that Ricardo Eliecer Neftalí Reyes Basoalto – one of the most influential Chilean poets of the twentieth century, with a Nobel prize for literature in 1971 – had certainly taken inspiration in his European colleague when choosing his alias, and most known, of Pablo Neruda.

A few exclamations rise from the small Spanish group, then all of them continue slowly the ascent towards Hradčany hill.

Many believe with certainty that Neftalí Reyes took his surname from the Czech literate who lived during the nineteenth century, however if we look beneath the surface, in reality there is no prove to corroborate this theory. In fact, it’s highly probable that this is one of those situations where an uncertain fact becomes accepted as true only for being extensively repeated. However, things could be very different.

Thus, a case worthy of Sherlock Holmes. Indeed, precisely the detective, figment of the imagination of Arthur Conan Doyle, could be the solution to what still remains nowadays a tiny literary mystery.

Let’s take it step by step.

We know that Pablo Neruda signed with this pseudonym for the first time in 1920, at the age of sixteen, when he published a poem entitled “Hombre” in a local newspaper. Choosing an alias was justified by the fact that his father, a railroad worker, was not in favor of the poetic and artistic tendencies of his teenage son. But how is it that the young man chose precisely this Czech surname?

Many believe that Ricardo Neftalí read some of the works of the Czech writer Jan Neruda, and being impressed by it decided to use his surname. Nevertheless, this explanation loses substance after a simple bibliographic research, as it immediately results that the first translation in Spanish of the writer, “The tales of Malá Strana”, came out in 1922, two years after the young poet chose his name. It is almost impossible that the future Nobel Prize winner had heard before that date of the Praguian poet and writer who died in 1891.

An interesting article from 2015 signed by the Chilean journalist Ernesto Bustos Garrido reveals important details that shed light on the story. Garrido underlines how Pablo Neruda was always very vague in providing the origin of his alias, and never gave anyone a satisfactory explanation. Hernán Loyola, a scholar expert on the life of the Chilean poet, mentions that the name “Pablo” was a tribute to the French Paul Verlaine, without ever leading to the name of Jan Neruda.

Although the most widespread and common theory is precisely the one wanting that the Chilean poet read by chance Jan Neruda’s name in a magazine, in reality this explanation doesn’t convince everyone.

The Czechoslovakian journalist and reporter Egon Erwin Kisch played a fundamental role in the story around this small mystery. Kisch met Pablo in Madrid and becoming his friend he asked him for the first time about the origin of his alias in 1937, recognizing in it something very familiar. But Pablo didn’t give the journalist a complete answer. Therefore, it was Kisch himself who asked the Chilean if he had not been inspired by his compatriot Jan Neruda, but Pablo didn’t confirm or deny the theory. According to some scholars, this was because he didn’t hear about Jan Neruda before that meeting. Since then, a sort of game shaped up between the two friends. Kisch asked the poet on various occasions to explain the origin of his surname, and Pablo not only never provided him the answer but always invited him to use his flair and talent of investigative journalist to solve the mystery.

In 1939, when the journalist had to flee Europe for political reasons and took refuge in Mexico, Kisch asked him the same question again yet Pablo was elusive once more.

During a conference that took place in Alicante in 1999, Robertson Álvarez, one of the poet’s researchers, mentioned that the only thing Pablo replied on that occasion was that he found the surname “Neruda” in a magazine, without specifying to Kisch if it was Jan Neruda or not. Kisch himself initiated some research and began to doubt that it could refer to the Czech writer, considering that the name of Jan Neruda seemed to have been completely unknown in Latin America before 1923. After the end of the Second World War, Neruda and Kisch met again and, inevitably, the crucial question was asked again. Neruda himself mentions in his memoir “I confess I have lived” that even on that occasion, the journalist, advanced in years, had not given up and asked him to finally reveal the truth. But Egon died without having received a complete answer.

Pablo Neruda visited Prague between 1950 and 1951 and, on this occasion, brought flowers to the grave of Jan Neruda. However, even then he never admitted to any journalist of having taken the surname from him.

On U Vrchlického street, in Prague 5, there is a bronze bust of the poet, “great friend of the Czechoslovak people”, made in 1980, by the sculptor Zdeněk Kolářský in memory of the Chilean’s visit in Czechoslovakia.

On September 23, 1973, Pablo Neruda died in mysterious circumstances in Santiago de Chile, leaving the puzzle unresolved. Since that moment, the matter seemed forgotten for a while until, almost a decade later, something unexpected came up.

In 1981, the Chilean poet Miguel Arteche, in number 187 of the “Hoy” magazine, entitled “Sherlock Holmes admires Neruda”, claimed that the young Ricardo Reyes read the surname “Neruda”, either in a magazine, as mentioned by the poet himself, but not a magazine referring to the Czech Jan Neruda, either in a Sherlock Holmes story.
The translations of Arthur Conan Doyle’s stories were, in fact, easily available in Chile, in Spanish, when the poet was still a boy.

In the work “A study in scarlet”, published in 1887 and translated into Spanish with the title “A strange crime”, Sherlock Holmes meets the violinist Norman Neruda, a character who, among other things, really existed. It was the violinist Wilma Neruda (1839-1911), born in Brno, daughter of the musician Josef Neruda and wife of the Swedish conductor Ludwig Norman. Doyle knew well and admired the musician as, besides her fame, she moved to London in 1869 and lived precisely on Baker Street, close to the famous 221-B. We know from his biographers that young Reyes was a detective story enthusiast and, according to Arteche and Robertson, has certainly read Doyle’s story. Therefore, it is highly probable that the Chilean has seen the name for the first time precisely in there and used it to conceal his identity from his father. He legalized his name as his own two decades later.

It is obvious that any speculation on the origin of his surname fades in front of the beauty and power of Pablo Neruda’s lyrics. However, having to choose between the two proposed theories, we could avail ourselves of the famous “Occam’s Razor” (dear even to Sherlock Holmes). This methodological principle involves that in order to elucidate an unknown matter, the simpler and logical explanations should be preferred to the more complicated ones, under equal conditions. Thereby, regarding the most well-known but astute theory that sees in Jan Neruda the inspiration of the poet’s alias, the simplest theory of Doyle’s novel is not only more plausible, but as it appears, even “elementary”. 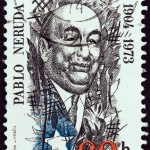 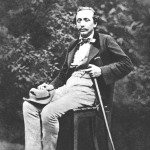 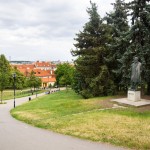