Jezeří, the fragile outpost of a time that is gone

Like a distant echo, you hear the creaking of bulldozers. And the horizon is a valley ravaged by machines, tortured by the coming and going of the trucks crammed with lignite, and crowned by smoking chimneys, like industrial crowns of this valley at the foot of the Ore Mountains. A moony and terrible landscape, center of one of the largest deposits in the entire Czech Republic: the Čsa coal mine, owned by the Severní energetická company. Bun then you turn around, and like a vision, here it is. A fragile baroque jewel that dominates this landscape sacrificed to an inexorable and profitable production, the Zámek Jezeří, the Jezeří Castle, wrapped around the top of the hill overlooking the valley. A fortress with a noble and tragic destiny, which even today, mangled by neglect, is distended – like a sail in the wind – by the memories of the ancient splendor, poetry and music that made it great for centuries. History has passed through here, and left its mark: politics was made in its rooms, and its frescoes sheltered music and love. But what is there still left of the antique splendors? Not more than vague memories, a mention in a dusty chronicle, because even the stones crumble to pieces, and the castle is in ruins. This is why the Europa Nostra association has put it down on the list of the seven most threatened European monuments. “This baroque jewel is in an advanced state of deterioration”, mentions the website of the association which works to ensure that a commitment is made by the national and European institutions so that the endangered historic buildings are restored and put in value. On the same list we find another castle, the one of Sammezzano in Tuscany, in addition to the Norwegian government’s building, Block Y, with the iconic murals of Picasso, destined, as far as it seems, to be demolished. 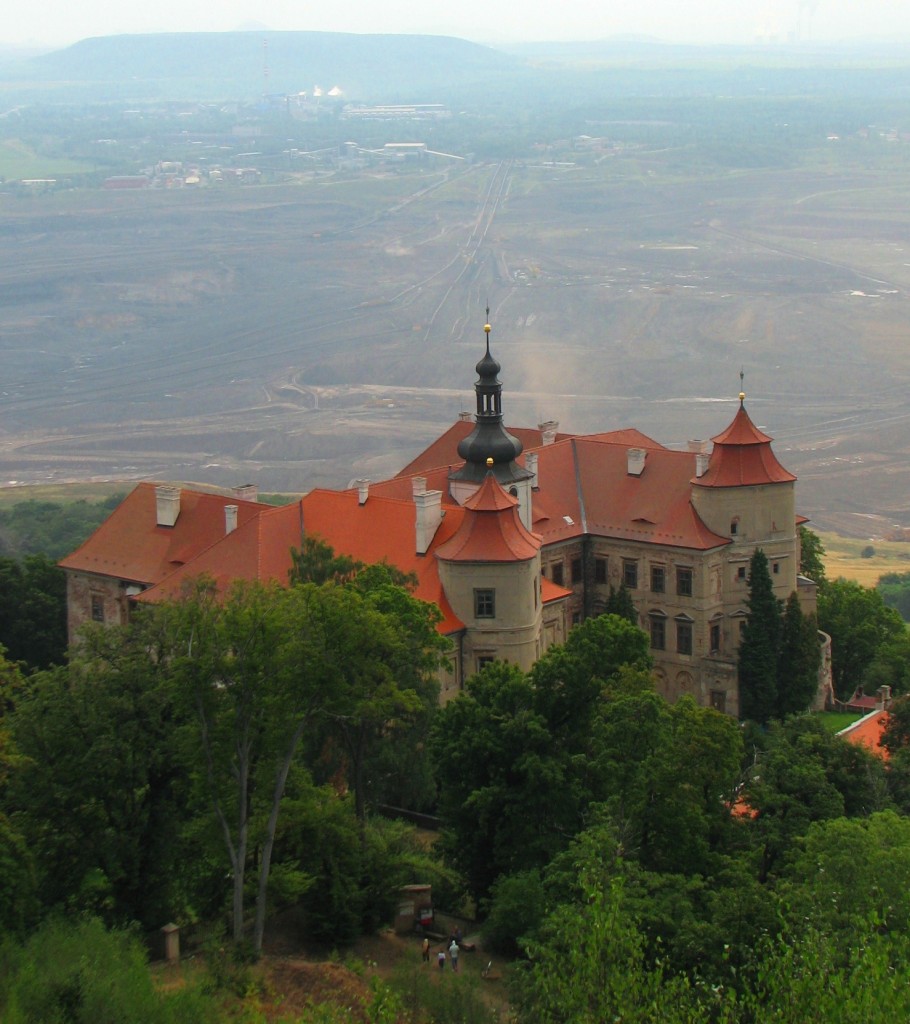 But let’s return to our story. And to do so, we must turn back to the fourteenth century, when on this site an initial fortress rose, called “of Eisenberg” (of the Iron Mountain), because this mineral was being extracted here. Then, like stratifying sediments, the edifice was rebuilt into a Renaissance-style construction that was later on converted into a baroque castle, the one that still dominates the surrounding valley. The name Jezeří (of the lake) started to be used only in the nineteenth century and is linked to the previous existence of the overlooking lake Komořany, located where nowadays the bulldozers are digging.

The castle is monumental and labyrinthic: it has two hundred and sixty rooms displayed on nine floors with interiors built to sparkle with the rich splendor of the Italian baroque. Before industrial modernity made the scene and plundered the valley, the construction was surrounded by a nature worthy of a Renaissance painting, a land covering five hundred acres and including rich hunting and fauna reserves and sixty hydraulic works and waterfalls. An enormous park was opening in the valley, considered one of the most beautiful gardens in all Bohemia. And up there, in the now bolted shut rooms, wrote J.W. von Goethe, stayed Giacomo Casanova, and crowned heads of half of Europe paraded through: King George of Bohemia, Prince Louis Ferdinand of Prussia or the Archduchess Maria Luisa of Austria. During the Second World War, the castle was even transformed into a concentration camp for the officers of the allied armies: Pierre De Gaulle, the brother of the future president of the French Republic, Charles de Gaulle, was held prisoner precisely between these walls. But most of all, the name of this construction is connected to classical music. Let me explain: Ludwig van Beethoven dedicated three of his nine symphonies to Franz Joseph Maximilian von Lobkowitz, his patron and owner of the castle during its golden age, including one of the most famous arias in the world, the Fifth, of so-called Destiny. It is in the theater of this building that the Third symphony, the Eroica, was performed for the first time, on the occasion of the visit of Prince Louis Ferdinand of Prussia. But the story of the opera in Jezeří isn’t entirely a German one as even the Italian Salieri talks about it several times in his correspondence. And there is another Italian note in this Bohemian province manor: the one of Luigi Vasi, the first interpreter of Mozart’s Don Giovanni at Stavovské divadlo – the State Theater of Prague – who performed twice here interpreting this aria in the castle’s theater.

But after the grandeur, came the decline. And to tell its story, we must turn to the twentieth century. Confiscated from the House of Lobkowitz by the communists at the end of the Second World War, the building was abandoned by the state for many years. The continuous deterioration of the structure is actually a strategy of damnatio memoriae: the desire is to make this building disappear from the history of the Czechoslovak people. Due to its geographical location next to the industrial city of Most, and its proximity to the coal mining area, the castle of Jezeří was slowly forgotten, sacrificed on the altar of the production priorities of the regime industry. Hana Krejčová, curator of the castle for nineteen years now, explains: “With the surrounding mines emerging, the Jezeří Castle should have been erased off the map. There were even plans to demolish it. Since the 1950s, the conditions in Jezeří have been steadily deteriorating”.

It is not surprising that right here, during the 1980s, a crew of American filmmakers came to shoot some of the sequences of the movie Howling, a lycanthropy movie, for which the advanced state of deterioration of the castle was actually a scenographic godsend. An anecdote about the movie is worth the price of the ticket: filmed in the Iron Curtain countries during the Cold War, the Czechoslovak authorities authorized its production, suspecting however it was an excuse to study the terrain and develop an invasion plan of the country. For this reason, the surveillance of the cast was so tight that even the director started to suspect that his first assistant was an STB or KGB agent. This was decidedly a more compelling plot than the movie produced, considered to have been one of the worst in the history of cinema.

Following the horror season, the recent history, linked to the Velvet Revolution, represents a (new) disruption. At this point, it was decided that the castle should be restored and upgraded, but regardless the visits of prominent political figures, such as Prince Charles or Václav Havel, all the plans remain unimplemented.

Nowadays, the castle is reduced to a crumbling and besieged structure: the Europa Nostra association is yet another mayday. However, against the greediness for the land of the adjacent mine, and despite the rumbling of the machines that little match the notes of classic works from ancient times, many tourists continue to visit this valiant architectural forefront of a retreating time. The Jezeří Castle stands up, on its own, like a marvelous David, facing the disruptive yet graceless force of a Goliath that would like to crush it. 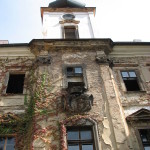 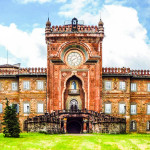 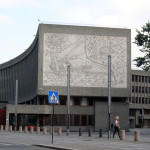