posted by Redazione May 21, 2014 Current Affairs

The Czech spa city is a favourite destination for arrivals from the Federation. They come to find relaxation and investment opportunities. Many are the Russians who settle here

Cyrillic everywhere. On the signs of shops and restaurants and posters aimed at tourists, Russian has taken the lead among all the languages and quite often exclusively, with little regard for English, German and even for Czech, the local language.

While walking along the streets with their elegant Art Nouveau buildings and imposing neoclassical colonnades, Karlovy Vary looks like a Russian enclave in the heart of Central Europe.

“In a tourist city like this, the knowledge and use of foreign languages is essential, but we do not quite understand the reason for all these Cyrillic notices and signs, as if they were the only ones present”, complain, almost with disdain, an elderly retired Czechs couple, here on holiday for a few days. Meanwhile, all around, you can hear only Russian.

The harmonious blend of nature and architecture creates an exceptional landscape, and the spring sunshine makes the whole city shine in all its glamour. All around is the narrow valley of the river Teplá, whose name means “hot” because its waters never freeze, even during a very cold winter. Karlovy Vary, 50 thousand inhabitants, owes its name to Charles IV, King of Bohemia and Emperor of the Holy Roman Empire, who founded it in the fourteenth century. 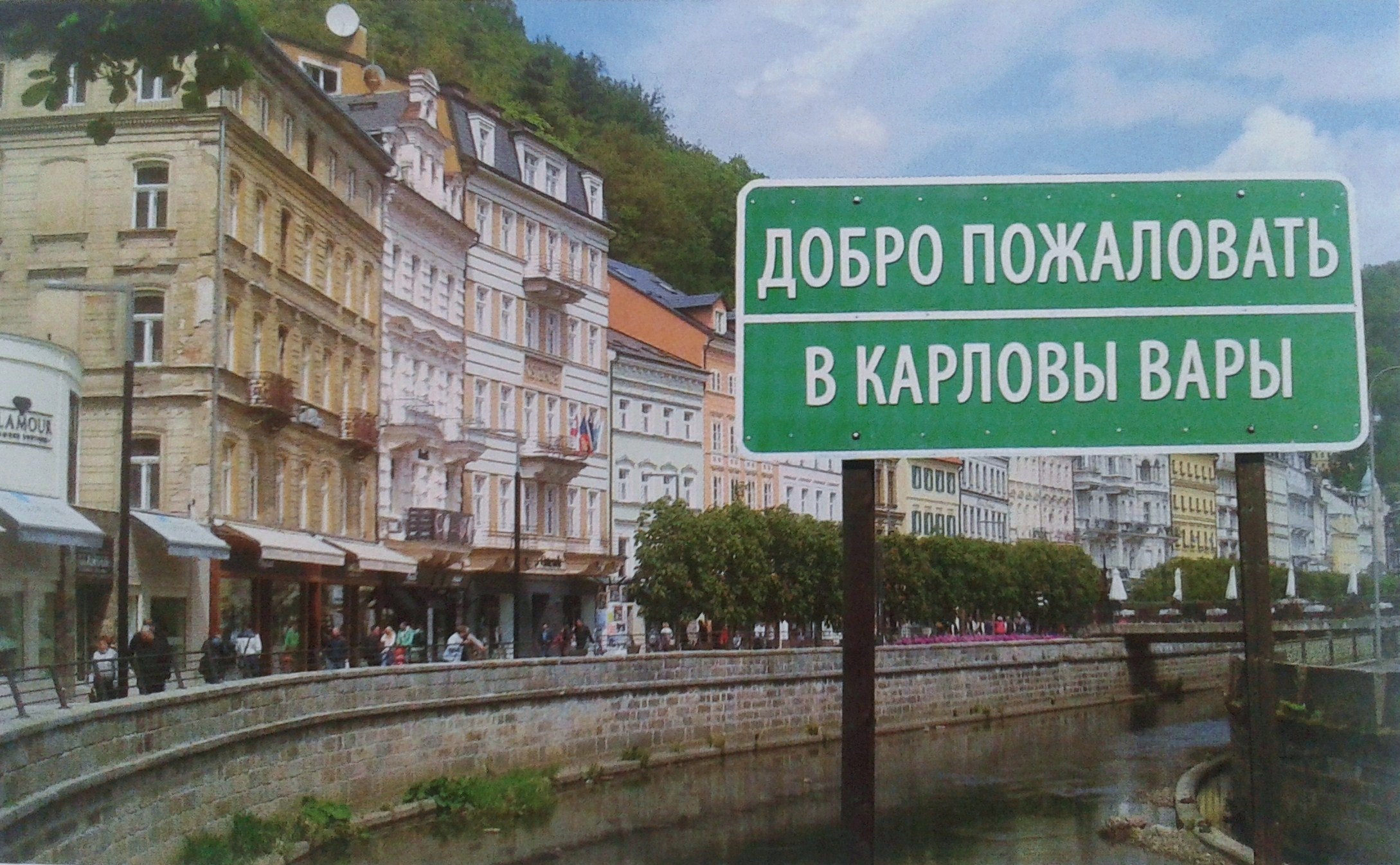 The official Russian residents are about three thousand, but the real number of them is certainly higher. Their presence is noted mainly in the old city centre, where they own not only most of the houses, but also many shops, hotels and other commercial activities.

In the small International Airport Karlovy Vary there are only three scheduled flights, that link Moscow, St. Petersburg and Yekaterinburg. Arrivals are daily and planes are almost always fully booked. They bring over the typical spa visitors, who flock to the prestigious hotels and nursing homes for a wellness holiday. It is easy to recognize them because they gather close to the spring waters, sipping from the typical small flasks the water which is rich in minerals.

Before departing, they fill their bags with souvenirs: locally made crystal and porcelain works and then the typical Karlovarské oplatky wafer. Selling like hot cakes are also the Becherovka bottles, the herbal liqueur, which has Russia among its main export markets.

The city is then invaded by Russian tourists who come to the city for a single day visit. The main place where to stay is Prague, but a quick visit to Karlovy Vary is a must. They walk in large groups, almost as waves of people, accompanied by guides, who will inevitably spend a good part of the route reminding them of the ancient relations between the spa city and Russia.

“It is a long-standing bond that dates back to the early eighteenth century, when Tsar Peter I arrived here on holiday. It was then that the Russian aristocracy chose Karlovy Vary as their favourite spa destination”, explains Tamara, a tourist guide, who takes the opportunity of a short break to have a cigarette, while some of her clients gather to pray inside the Orthodox Basilica of Saint Peter and Paul, which is a fundamental stage of the tour. The church is one of the most precious buildings of Karlovy Vary, with its gilded onion-shaped domes and interior parts with richly decorated icons. “The building dates back to 1898 and was built thanks to the generous donations of wealthy Russian patients that even then were very numerous”, Tamara explains.

Just a few hundred meters away, in a villa surrounded by a park, in a street named after Peter the Great, is the seat of the Consulate General of the Russian Federation. Already in operation during the pre ‘89 period, at the time of communist Czechoslovakia, when these hot springs were among the favourite destinations of Soviet officers and senior echelons. The favourite hotel was still the monumental Imperial, in art déco style, which stands on raised ground, or the beautiful Grandhotel Pupp, in neo-Baroque style, considered one of the most famous hotels in Europe.

After the revolution of 1989 and the fall of the Berlin Wall, the new rich class of the former Soviet Union started coming over, ready to invest and buy up the most prestigious real estate properties available.

According to land statistics, it now appears that in Karlovy Vary a great deal of the buildings in the old city centre are now owned by Russian citizens, or in any case, can be attributable to companies whose owners are from there. “They are the best clients and the absolute protagonists of this real estate market. Generally speaking, they are not extremely rich people or oligarchs who are able to afford houses in Paris or London, but they are rather wealthy people who are attracted by the name and prestige of Karlovy Vary and who want to make a good investment. They speak Russian, but they are not all Russian. A lot of them are from the former Soviet republics”, a real estate agency clerk explains. The shop windows are full of adds in Cyrillic. “Numerous are those who have settled here in the last twenty years after leaving their countries of origin for good, but there are also a number of owners who come over just for a short stay during the spa season”.

Local citizens experience this invasion with a variety of sensations. Some turn up their noses, often advancing doubts over such affluence. “Who knows where all of this money comes from? They are very reserved, and the word integration is out of the question”, explains a woman who claims to come from the suburbs.

“Personally, I am conditioned by the experiences of the past, and the recent events in Ukraine have reinforced that feeling. I do not like this invasion. The Russians here have always been accustomed to acting as masters. It is a bit like being in the old days when we were an occupied country”. Not so biased is Tomáš – who runs a small restaurant just outside the more touristic area: “They have brought a lot of money to our city and are a source of prosperity and development. As customers, they are the best. They are quite willing to consume and pay without bother. Quite the opposite of the Germans, who are often even quite stingy”.