Home  »  Current Affairs   »   Konev, liberating yourself from the liberators

Konev, liberating yourself from the liberators

What to do with the symbols of the Soviet victory over Nazism? When the muteness of a statue is too talkative

Last September, the municipality of Prague 6 decided to remove the statue of a Soviet general from a public area and transfer it, perhaps, to a museum. The news, on the surface, may seem of marginal interest. It is the iceberg of Marshal Ivan Stepanovič Konev; below in the water the story gets more complicated.

Since the early 1990s, the Czech Republic has removed about 450 statues and monuments from the socialist period. Different periods, a nuisance of the past, cumbersome stories perhaps. Managing historical memory across public spaces is a common, complex and fairly transversal topic both to the east and west of Prague.

In June 2017, the Polish government enacted a law that gave a year to local authorities to get rid of any work of art on public land to celebrate “people, organizations, events or dates that glorify communism”. Two months later there were already 500 works demolished or identified.

In Ukraine, in the months following the 2013 Euromaidan protests, the popular fury knocked down over more than a hundred statues of Lenin scattered throughout the country. In Hungary and Lithuania, the statues of the socialist era have been removed and amassed in memorial parks. In the US, the problem has existed for longer. In the summer of 2017, the neo-fascist rally of Charlottesville (during which a white supremacist drove his car through a group of counter-protesters, killing a woman and wounding 20 others) brought back to public discourse the treatment of statues, monuments and flags of the Confederates (the “Southerners” of the American Civil War), today symbols of the far right. In Brussels, a stone’s throw from the district that is home to the highest institutions of the EU, the equestrian statue of Leopold II, the executioner of the Congo, stands undaunted. Not to mention that in Italy and Spain it has not yet been decided what to do with the tombs of their dictators, Mussolini and Franco, still destinations of nostalgic gatherings.

The Czech lands, with their peculiar and often unfortunate history in the last century, have had to deal several times with the didactic problem of memorials. After the First World War, the statues of the old Austro-Hungarian empire were replaced with the new democratic heroes, with great volume of dedications to the first president Tomáš Garrigue Masaryk. These ones as well as other symbols of the First Republic were then demolished and used as war material by the Nazis, or in turn replaced in the second post-war period by figures more in line with socialism. With cases in which, after the Velvet Revolution, the old Masaryk returned to peep out from where he had been driven away. TGM is said to have been deposed and reinstalled five times in the Moravian town of Holešov; ironically, as we publish this story the statue has been removed once again – but only for work on the square.

The latest casus belli, surrounding the statue of Marshal Konev, is located at the confluence of this story, between memory and propaganda, and a different story of the management of common goods. 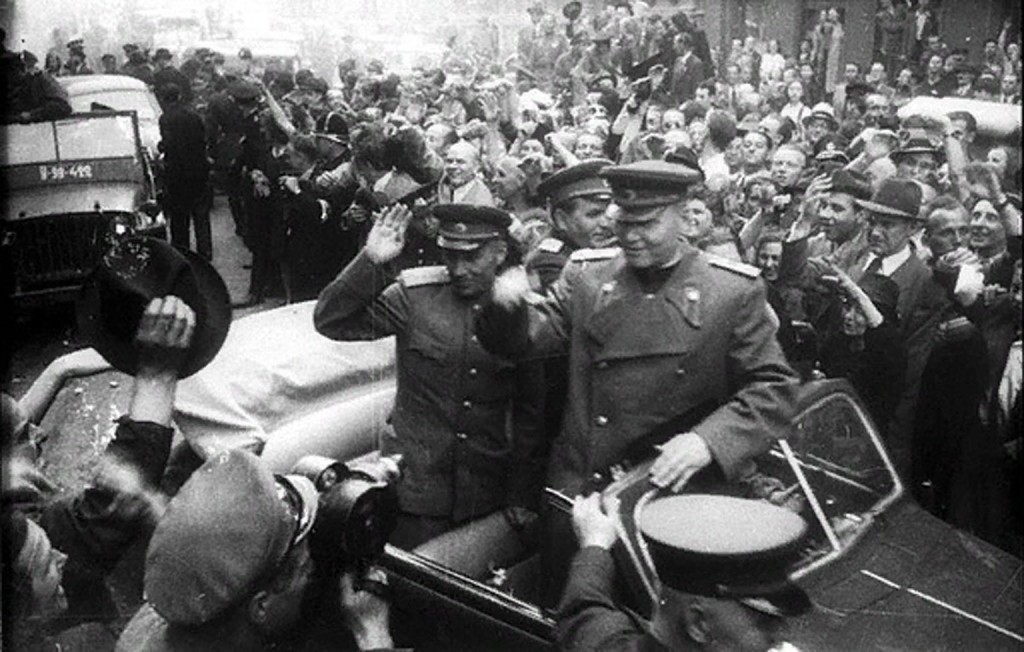 Glory and fall of the soldier

After more than six years of Nazi occupation, and almost seven from the betrayal of Western democracies (the infamous Munich Pact), at eight o’clock in the morning of May 9, 1945 the radio announced that Prague had been liberated by the Red Army. Entering from the north, after having liberated the Terezín concentration camp, the tanks of the First Ukrainian Front nullified the poor German defense, with many of them already on the run after the three days of revolt in Prague. At the command of the First Ukrainian Front, which would end its war in Prague, after having freed Budapest and Vienna and participated in the fall of Berlin, was Marshal Konev. Photos of that day portray him on a military machine, while he greets and poses for celebratory photos, surrounded by the Prague crowd in jubilation. The local feelings then understandably changed.

Konev, along with Marshal Georgij Zhukov (the liberator of Berlin), was the most celebrated of the Soviet military. The two names have for decades been symbols of victory over Nazism, sanctified as much as Prince Mikhail Kutuzov, the general who defeated Napoleon, an eternal protagonist thanks to Tolstoy’s War and Peace. But being a Soviet superstar also meant getting your hands dirty. Ivan Konev was head of the Warsaw Pact when he crushed the Hungarian revolution of 1956, and head of the Soviet sector when the wall was built in ‘61 in Berlin. According to the recent plaque under his statue in Prague 6, a correction requested by the local administration in 2018, was that he was also behind the strategy of the invasion of Czechoslovakia in 1968, although this accusation, was met with conflicting opinions among historians, given that the marshal had already retired in 1963. In addition, in 1970 he refused to go to the now normalized Prague to receive the honor conferred to him of “Hero of the Czechoslovak Socialist Republic”. A distant stance, perhaps of shame.

The original caption, dating back to 1980 like the statue itself, was considered too celebratory, yet today the interpretation of history seems to be pushed into the opposite direction.

The bone of contention

The statue is nicely displayed in the green of a garden overlooking the street dedicated to the Yugoslav partisans, in an area of the district of Prague 6 strongly marked by the architecture of the regime, with the Hotel International two steps further north, concrete symbol of Stalinism. Politically, the district has long been the exact opposite, a stronghold of the liberal-conservatives of the Top09. The straw that broke the camel’s back, on the anniversary of the Soviet invasion of 1968, last August the 21st, a bucket of red paint and the inscription “No to the damn Marshal! We do not forget!”

A few days later the Prague 6 administration, led by Mayor Ondřej Kolář (Top 09), announced that it wanted to remove the statue. A hasty decision to give the impression that they want to take advantage of the vandalism politically, as an excuse to confirm a vox populi that detests every enemy symbol. However, after more than a month, the statue is still there.

The quarrelling surrounding the statue has created predictable turmoil, with people not immune from problematic historical and civic judgments jumping into the argument. The KČSM communists, the unquestioning nostalgic followers of the old days, are obviously in the front line. The Kremlin hawks did not take long to make themselves heard either and the Russian Minister of Culture, Vladimir Medinsky, went as far as labelling the Mayor Kolář a Nazi. President Miloš Zeman, whose sympathies with Moscow are certainly not new, has obviously intervened to defend Putin’s anger and his entourage.

Finally, there is a detail of history between the Czech capital and socialist statues. Out of the 450 sculptures removed in the last thirty years, the vast majority had no political, propagandistic or didactic themes. The availability of public art was due to a national law in force from 1965 to the fall of the regime, which obliged the donation of 4% of the investment for each new public building to a work aimed at accompanying it. In the next two decades the law was the basis of about 1,200 creations in public spaces, mostly statues and sculptures, only in the capital. Beginning in 1968, the artists who took part in the calls for tenders feared that any political reference could be under special scrutiny, and therefore undermine the chances of the project going ahead. Local offices and artists implicitly agreed to the neutrality of topics such as family, sport, work, nature and so on. One out of three works in Prague was then demolished after the Velvet Revolution; the fact then that the demolition of public art took place mainly in the capital is another factor that leads us to think the market hunger pushes more than possible political motives.

It is also in this context that the removal of the Konev statue takes hold. Is justice done against the symbols of oppression? Act of community awareness, or continuous removal of city reflections?
Hannah Arendt claimed that history is a story with many beginnings and no endings. The reality of the merits of the Red Army in their victory over Nazism seems to have been lost and transformed, both due to Soviet demerits that followed, and for contemporary political necessities.