Home  »  Art and culture   »   The church suspended between past and future

The church suspended between past and future

The building designed by architect Josef Gočár in the Prague district of Vršovice: built for the thousand-year anniversary of St. Wenceslas death, it is in fact a dream about modernity

The dazzling white, naked tower that rises with insolent decision in all its imposing silent austerity, promptly made the church of St. Wenceslas in Vršovice a symbol of modern Prague in the 1930s.

Such a candid, honest and sincere object was able to shape the avant-garde tendencies that overlooked the European architectural scene, exposing the city’s desire to be the contemporary, dynamic heart of Europe.

Josef Gočár’s 1927 project, drawn up in close collaboration with Alois Wachsman, a surrealist painter, architect and set designer, was as modern as ever, with its forms shaping the latest dictates of the Modern Movement. Suffice it to think that congresses aimed at promoting their ideas, the famous CIAM (International Congresses of Modern Architecture), did not formally begin in Switzerland until June 1928. 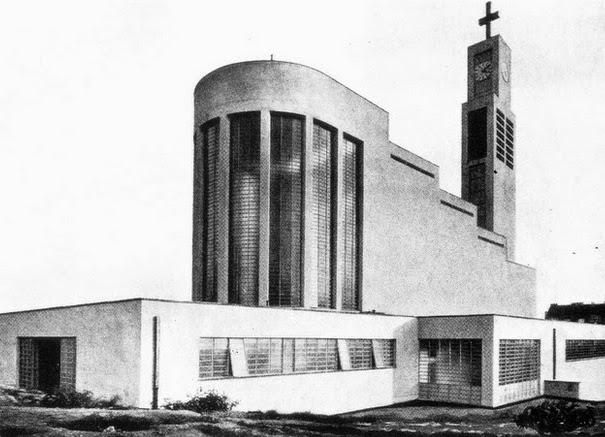 Once the dream of a Czechoslovakian style marked by the Cubist experience and the even briefer Rondocubist phase, had faded away, around the middle of the 1920s many Czechoslovak architects began to look towards the international scene with renewed interest. Among them, the discouraged Gočár resumed the formal experimentation in 1924, now skeptical about the possibilities of a national figurative code of which he had been a promoter. This trend is reflected in the project for the Czech Pavilion at the International Art Exhibition of Paris of the same year, to which Gočár works taking example from the Wagnerian school and some Dutch trends.

In this regard, the celebrations of the thousand-year anniversary of St. Wenceslas death in 1929 represented a must-see opportunity to undertake the assertion of a role for the new Czechoslovakia in the European architectural avant-garde scene for the years to come, especially after the failure of the rondocubist adventure. In addition to the completion of the Cathedral of Saint Vitius, and the construction of a Catholic church in Vinohrady, the famous church of the Sacred Heart of Jesus of Jože Plečnik, on that occasion a contest was announced to equip Vršovice, which a few years earlier had been annexed to Prague, with a parish Catholic church larger than the eighteenth-century Saint Nicholas, which would be followed by a largely expressed desire for over sixty years.

A winner against the other fifty-one proposals of the two-stage competition launched in 1927, the Gočár design for St. Wenceslas church can be considered as crucial to his career as it was paradigmatic for Czechoslovak rationalism. Having worn the white coat of a functional architect for the limit of fifty years, with this project Gočár marked the definitive passage to a new style, freeing up a constructivist potential already anticipated in the Wenke Warehouse project at Jaroměř nearly ten years earlier. In this work, Czechoslovak rationalism witnesses the realization of one of its best examples, as well as the entry into its ranks as one of its most significant and authentic examples, which has been recently rediscovered.

The peculiar style of Gočár, and in particular the one expressed in the Vršovice temple not only itself has a constructivist element, that would contrast art as a representation of art as construction and object in space in an annihilation of the distinction between form, function and structure, but it has a much wider look on the trends of the Modern Movement and never completely free of the classical lesson. In fact, in front of the white tower that is engraved with a blunt gesture on the mighty and mute distyle pronaos, the mind can only run into the pure, rigorous and magnificent game of the volumes under the light of Lechorbuserian memory, but without touching, at least for a moment, the elegant and unbeatable balance of the Berlin Schinkel’s Altes Museum. Meanwhile, the presence of only two slightly backward columns emerging from the large staircase accentuates the structural vividness of the vast pronaos rested on by the tower at its midpoint, referring to the typical constructivist ardor.

Visible from afar both day and night due to the face and the great illuminated cross, the 56 metre high tower was definitively and formally completed only in 2010 with the positioning of the statue of St. Wenceslas realized by Jan Roith on the original design of 1929 by Bedřich Stefan on the shelf at the foot of the tower itself. Provided with vast brick glass mirrors and above all noticeable lamellar openings at the top, the bell tower is an evolution of what was already experimented by Gočár at Brandýs nad Labem before and Hradec Králové then, but also a model for subsequent accomplishments of both Gočár himself and other architects of the Modern Movement, such as the tower of the Corpus Christi’s church in Aachen by Rudolf Schwarz. Likewise, Gočár here quite explicitly applies other solutions and strategies from his studies and from previous experimentation. In particular, as well as the two aforementioned churches, some of the solutions come from the slightly earlier study for the cinema of Baťa in Zlín, among which the strategy for enhancing an inclining batch stands out. The fact that the face of the portico on which the tower stands is the front of a massive body, which like a crepídine, rests on the hill, mitigating it and at the same time highlighting the slope, seeming to guide the proportions of the whole composition. What appears from the outside as a base is the temple itself, and the ascending volume sequence, developed with Wachsman, that emerges to the north of the tower, is nothing more than the elevation of the central nave, accentuating the growth of the interior spaces planimetrically converging towards the apse. A perspective theatricality already experienced in Hradec Králové in the design plan of the church of Saint Ambrose that Gočár would employ with renewed geometries a decade later in the church designed for Tomáš Baťa in Zlín, alongside other already present solutions in the Prague project. To emphasize this solemn space theatricality of prospective convergences and considerable differences in height between the simple aisles of smooth and white planes free from pillars and dotted by the ponderous stations of the Via Crucis of Bedřich Stefan is the coloured light filtered by the large glass windows of the apse by Josef Kaplický, whose subjects do not conceal a certain patriotism.

A celebration of clear lines, cold volumes and meticulous lights, with this work the mastery of Gočár completes a sacred building almost stripped of any ornament that can be said to be superfluous, showing a virtuous balance between liturgical necessities and remarkable architectural and scenic quality. Through its peculiar stylistic figure aimed east with Constructivism as well as with the more western tendencies of the Modern Movement, not forgetting neither the classical nor the national values, here the mature Gočár offers a successful example of sacred architecture, contributing substantially to making the Czechoslovakia of the 1930s, one of the focal points of European vanguard architecture. 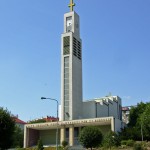