The beer crisis in the home country of beer

Despite a drop in consumption, the Czech Republic still retains its world record title for the consumption of “pivo” – with about 160 litres per person a year

In a Country such as the Czech Republic, considered the mother country of beer, it is certainly not easy to admit there is a reduction in the consumption of pivo, as they call it in this part of the country, the delightful combination of water hop and malt.
However, the figures are quite unequivocal in pointing out a progressive drop in the amount of frothing beer that is consumed.

Last year – according to provisional figures by Cesky svaz pivovaru at Sladoven, the national association of breweries and malt factories – in the country about 18.8 million hectolitres of beer have been produces, with a reduction of 5% compared to 2008. The giant Plzenský Prazdroj, which by itself represents nearly half of the national market, just a few days ago, announced that it had sold last year in the homeland, 4.5% less than in 2008.

These are the actual figures, although it is hard in this realm of the “pivo”, to accept it.
“No, it doesn’t seem so. I can’t say that I have personally verified it”, said in a faltering voice a worker at Olympia, a beer-house at the foot of the Petrin hills.
“The problem is felt only slightly” – the innkeeper admits eventually, and justifies it with the decrease in the number of tourists. Last year, the hospitality industry witnessed a reduction of new arrivals of at least 10%, particularly by western visitors. “And when they arrive, they are less willing to open their purse”.

In fact, at the Olympia, one does not see the high number Germans who used to fill up the place with tablefuls of noisy people. 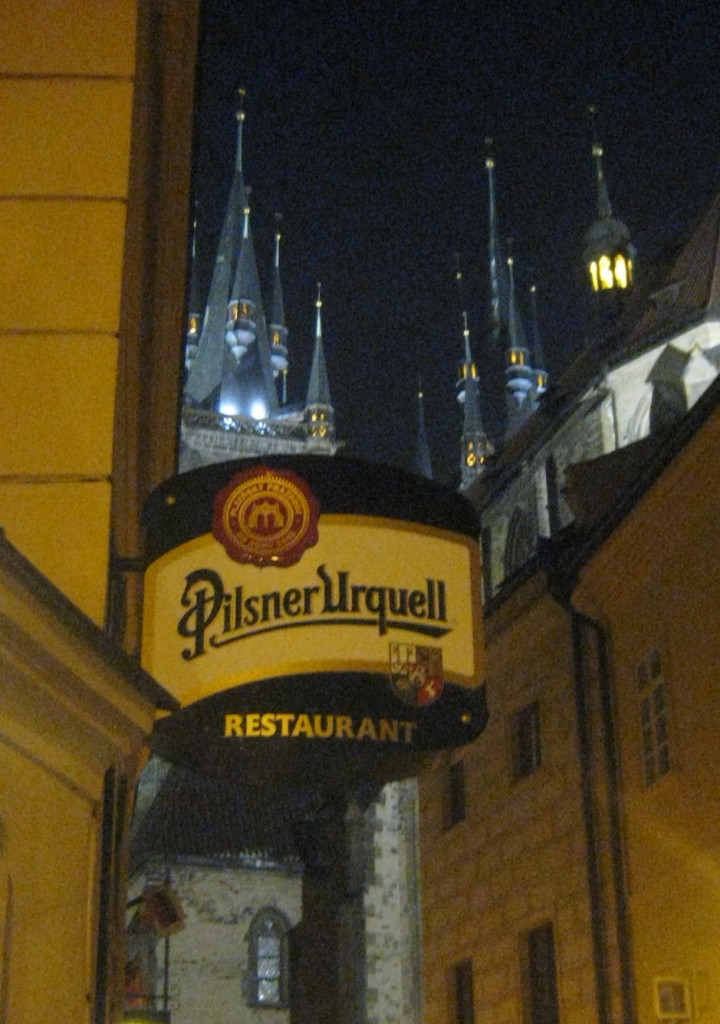 The only tourists who, according to statistics, Prague does not seem to have lost, are the Italians. Full of enthusiasm at the idea of having local beer, according to the barmen. But it then all boils down to “I would like to, but I can’t”. ”You are false drinkers. You give up after only two mugs”, declares a waitress”.

The decline is real and despite the economic downturn, changes of traditions, habits and style of life of the Czechs have their effect on beer consumption, above all among the young generation. Consumption of beer among the Czechs from the age of 18 up to 30, in the last six years, has passed from 92% to 84%, according to a survey by Cvvm. Perhaps this could also be due to the constant increase, in the last few years, of the Czech wine market. Also the stricter measures on alcohol consumption that apply to motorists, surely has its effects.
The keenest drinkers of a glass of beer seem to be between the age of 45 to 59, in a country which produces the best beer in the world and where, despite the decline, maintains the world record of consumption (about 157 litres per person per year).
More explicit in speaking about a possible crisis is U Houbaře, “At the mushroom picker”.

“Yes, we do feel there is a decline. Perhaps it is also due to the economic crisis. People have less money and are less enthusiastic about spending an evening at the beer-house”, declares the barman at the counter during his break. And yet, this is one of the most successful places. The restaurace U Houbaře, in the Holesovice district, came first in the “Pilsner Urquell Pub Guide 2010 competition. Besides the beer, customers will have, undoubtedly, considered the excellence of its cuisine with the menu consisting of a special dish called koleno (roasted pork sheen).
Inevitable is also a visit to U Zlateho Tygra, to the Golden Tiger, in the heart of the Old City a few steps from the Charles Bridge. A beer-house par excellence, “not for tourists”, with its cigarette smoke and strong smell of fried food from the kitchen.
Long tablefuls, where in the evening, it is impossible to find a seat.
U Tygra owes its fame to Bohumil Hrabal, who used to be a known habitué here. On the walls, the photos of the writer, including those taken at his table with Vaclav Havel and Bill Clinton while they were having a beer. According to unanimous opinion, nowhere else in Bohemia or Moravia do they serve a better beer.
At U Tygra, pivo is a religion, with many followers and “waiters – High Priests” who seem unwilling to hear about the word crisis. ”Made up stories by the newspapers. Please let us go on with our work”, they close the argument.