Home  »  Current Affairs   »   The escape of the Trabants

The escape of the Trabants

In the summer of 1989, the Germans of the GDR invaded Prague to escape to freedom

The German exodus led to the crumbling of the Berlin Wall

Abandoned Trabants everywhere on the roads. The streets Vlašská and Tržiště covered in trash and food scraps. Here and there some suitcases can be seen, soaked in the first, late summer rain. This is how the inhabitants of the Malá Strana district remember the days of the exodus of Germans from the GDR to freedom, through the Embassy of the Federal Republic of Germany in Prague.

“It was a day like any other in that late summer of 1989, when suddenly, the Germans in the GDR began to arrive en masse, many by train, others in their Trabant cars – the symbol of East Germany. The Square at the intersection with the Šporkova began to get overcrowded”, recalls a senior, one of the few who still lives in the neighborhood. The staff of the embassy of Bonn found themselves unprepared, they did not know how to react. “It was something unimaginable. No one could believe what was happening. Even the Czechoslovak police were astonished and impassive, as they waited for some orders to arrive from the Castle”.

The Italian Cultural Institute is located in front of the Lobkowicz Palace, seat of the German embassy, and some employees remember those days well. “Refugees filled the square with their baggage, some blankets to cover themselves, a few personal items and especially the great hope of being able to rebuild a life beyond the wall”, recalls one employee. “During the night, many sought refuge in churches and abandoned houses. At the time, all the buildings in Prague were always open, including our institute. Some of them began to make use of our bathrooms or entered simply looking for shelter. Men, women and children bustling in front of us, leaving us standing in disbelief”.

At the time, the Italian Cultural Institute was very active, and was considered one of the finest and most important institutions in the Bohemian capital. “The refugees took advantage of our cultural program, while hoping that time would pass quicker”, the clerk adds. “In those weeks, we showed the greatest masterpieces of the most famous Italian directors: Luchino Visconti, Vittorio De Sica, Federico Fellini, Michelangelo Antonioni, Pier Paolo Pasolini. However, I remember that it was above Jesus of Nazareth by Franco Zeffirelli which seemed to be the most appreciated, even to the point that it was shown up to three times a day for an entire week. The Night Porter, directed by Liliana Cavani, also had a sensational success. I remember one thing particularly: even the Czechoslovak policemen went to the institute to see the films. They usually turned up in uniform to buy the tickets, but then came to the evening screenings in normal clothes, blending in among the crowd of refugees. It is something inconceivable in some respects”.

In an exasperated attempt to put an end to the situation, which is now spoken about all over the world, Erich Honecker, the General Secretary of the Central Committee of the SED, the Socialist Party of the GDR, offered the opportunity to its citizens to emigrate to West Germany within six months provided they were immediately returned to their homeland. Practically nobody believed his words, fearing it was a trap.

That crisis was a double embarrassment for East Berlin. On the one hand, they did want to not prove to be weak in the eyes of the Soviet Union, led by Mikhail Gorbachev, at such an important time as the 40th anniversary of the founding of the German Democratic Republic. On the other, the escape would push many other East Germans to choose the same road and flee to the West.

Czechoslovakia had decided not to intervene except in extremely urgent or serious cases. Prague Castle, led by President Gustav Husák, could not take sides, as the country undoubtedly was part of the Soviet bloc, and linked to the other states of Eastern Europe, but at the same time its economy was fueled mainly due to trade with the Federal Republic of Germany, i.e. West Germany. The KSČ, the Communist Party of Czechoslovakia therefore decided not to intervene and to leave the resolution of the crisis to the two Germanys.

“The sky was tinged with blue, especially on those days in Prague. The weather changed constantly, as if it were forewarning an imminent sea change. Women and children were crying. The men shouted until the Embassy of the Federal Republic of Germany opened the big wooden door”, says another elderly man in Prague. In early September, the Bonn government finally decided to open the door of the Lobkowicz Palace, and the refugees began to gather in the garden. The Red Cross rallied their people to set up tents and provide assistance, blankets and food. Others continued to arrive in the following days. Many tried to climb over the surrounding wall in an attempt to reach safety. The most emblematic case was that of a young pregnant woman, who having just climbed over the wall, shouted to the crowd that her son would be born in a free world. Words which were followed by the emotional applause of the other refugees.

Meanwhile, the autumn rain turned the grounds of the park into a morass of mud. Over 4000 German, including 300 children, were packed inside it, with totally inadequate sanitary services. The risk of an epidemic was high. The sweeping staircases of Lobkowicz Palace, were turned into dormitories, with a refugee bedding on every step. The situation was getting worse by the day, making it necessary to start an open dialogue with East Berlin.

The liberating moment came on 30 September 1989, when the Foreign Minister Hans Dietrich Genscher came to Prague and appeared on the balcony of Lobkowicz Palace at seven in the evening, to announce the agreement. The same minister, although in different circumstances, had fled the GDR in 1952, and probably could understand the tragedy of the desperate refugees better than anyone else. “We have come here today to let know that you can leave”. Those few words were greeted with tears of joy and sighs of relief.

The same evening, the first armored train departed from the Prague-Libeň station towards Hof, a Bavarian town on the border between the two German states. The only inconvenience was the request from the GDR to let the trains pass through their territory in such a way that they could be formally expatriated from East Germany. Within a few days several freedom trains, as they were called, transported thousands of Germans to the border.

“The Trabants and the Wartburgs remained parked for a long time without any owner in the streets of Malá Strana, but I remember a single car remained for several weeks in Malostranské Náměstí, behind the Church of St. Nicholas, as if to warn the people of Czechoslovakia that for them it was time for a revolution”, says a former trader in the neighborhood. A revolution that led, on 17 November of the same year, to the fall of the communist regime and the election, in late December, of Václav Havel, the first democratically elected president in Czechoslovakia.

Thanks to this episode, often not sufficiently remembered, the dream of freedom of many men began to be realized. The Berlin Wall, a symbol of the Cold War and the division into two opposing blocs of the Old Continent, wavered and began to crumble right in Prague, before finally falling, less than 40 days later, under the eyes of the whole world, marking the beginning of a new era. 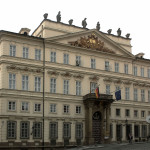 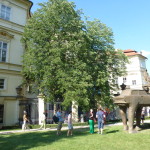 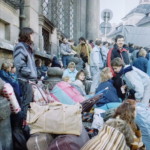 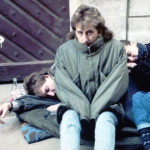 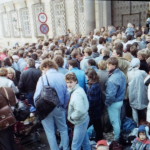