Home  »  Politics   »   The Quadriga for Havel in Berlin after twenty years

The Quadriga for Havel in Berlin after twenty years

To celebrate the anniversary of the Fall of the Wall, Germany pays homage to the hero of the Velvet Revolution

Berlin – “International solidarity strongly contributed towards helping the dissent of East Europe. This is why today we must sustain the fight of populations who are still oppressed in countries like Iran, Burma, Tibet and Cuba”. So spoke the former president of Czech Republic Vaclav Havel in receiving the Quadriga Prize last 1st October in Berlin for “his commitment in abandoning divisions in Europe”. Recurrent illnesses have made the old leader’s voice weak, but his smile was still serene while declaring that “truth and love will defeat deceit and hatred”.
Havel was awarded the Quadriga on a meaningful occasion: before a couple of weeks preceding the big celebrations organised in Berlin to remember the Fall of the Wall.
Since 2003, to coincide with the anniversary of the German reunification, the German foundation “Werkstatt Deutschland” has been assigning this Price annually to leading personalities in the field of politics, economics and culture who have played an active part in favour of progress. It’s therefore a recognition sign – as people in Berlin state – to remember the men who have distinguished themselves by their courage and their responsibility sense for Germany. 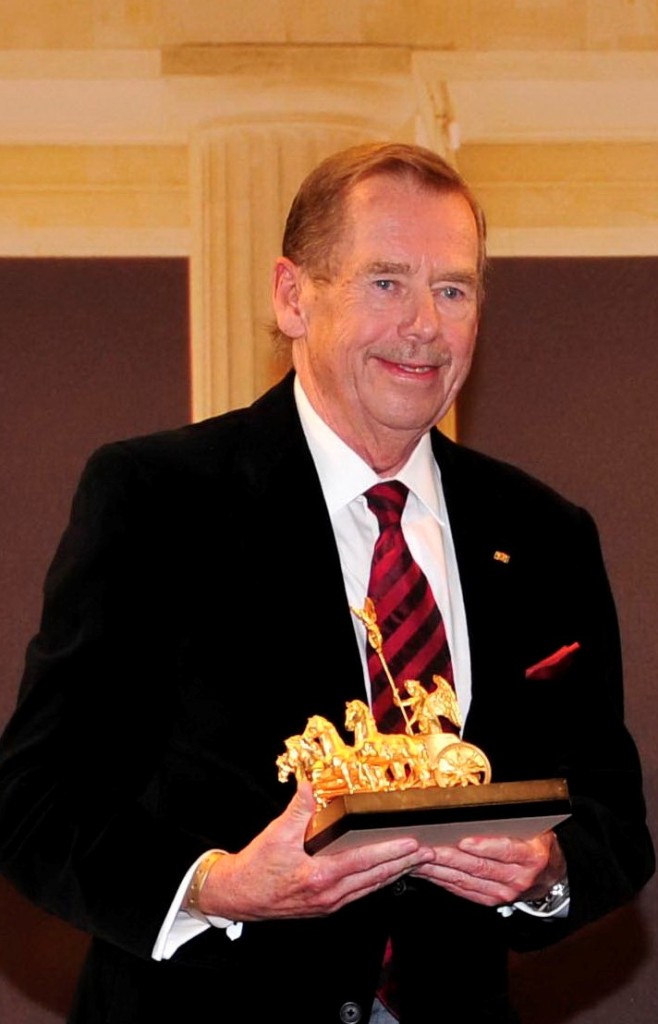 Together with Havel, this year have been awarded the Quadriga Prize also Michael Gorbatschow, José Manuel Barroso, the activist for civil rights in DDR Bärbel Bohleye and German artist Marius Muller-Westernhagen. Besides, the initiative promoted by Iranian women “a million signatures against discriminatory laws” has been also emphasised.
Twenty years after the fall of the Wall, the first event of a domino effect which would have changed Europe, the motto of “Quadriga 2009” has been “Pull down Walls and build bridges”. Especially suited for the Germans of the eastern block who think it would be inconceivable not to remember “the velvet revolution” who occurred some days later the pulling down of the barriers between Germans.
During an official ceremony before the Reichstag, Havel and the other VIPs have planted some trees together to symbolise the pacific overcoming of the conflicts among populations for a future of mutual growth.