The Kiev revolts viewed from Prague

Prayers and solidarity, the anxiety of the Ukrainian community towards news arriving from their country

The crowded Sunday mass has just ended and many small crowds of people form in front of the basilica. For Ukrainians living in Prague, the Orthodox Church of the Annunciation of St. Mary, in the area of Albertov, Prague 2, a few hundred metres from Karlovo náměstí, is one of the most popular places to meet and socialize. It is here where they follow every Sunday Mass, and then they stay to talk with friends and family on the pavement opposite. For many of them, it is one of the few opportunities for recreation, after a week dedicated solely to working at often tiring rhythms. It is an opportunity to speak their own language, receive useful information for their life in their new country and perhaps make some acquaintances.

Today, however, on this frosty holiday in late January, a very special atmosphere is felt. The anxiety is palpable, and there are many who continue to make the sign of the cross, and to gather in prayer in front a crucifix beside the exit.

“Our thoughts these days are directed towards the news arriving from Kiev”, explains Father Vasyl Stojka, still wearing liturgical garments. “The People are very worried. They pray so that the signs of civil war will blow over”.

The evolution of the crisis, since President Viktor Yanukovych decided not to sign the commercial partnership agreement with the EU, is being experienced with bated breath. The immigrants in the Czech Republic are many and constitute the largest foreign community (obviously ignoring the Slovaks). They are the classic gastarbeiter, guest workers, the cheap labour par excellence.

The holders of a valid residence permit reach a number of about 120 000, but the number of illegal immigrants is enormous, so much so, that the actual number of Ukrainians in the Czech Republic could be more than 200,000 people. Local authorities, especially after the start of the economic crisis, have tried to curb this immigration, and particularly in recent times have tightened the rules for the residence permit. Everyone however, is aware that the Czech economy, especially in key sectors such as industry and construction, could not possibly continue if there were no Ukrainian immigrants. 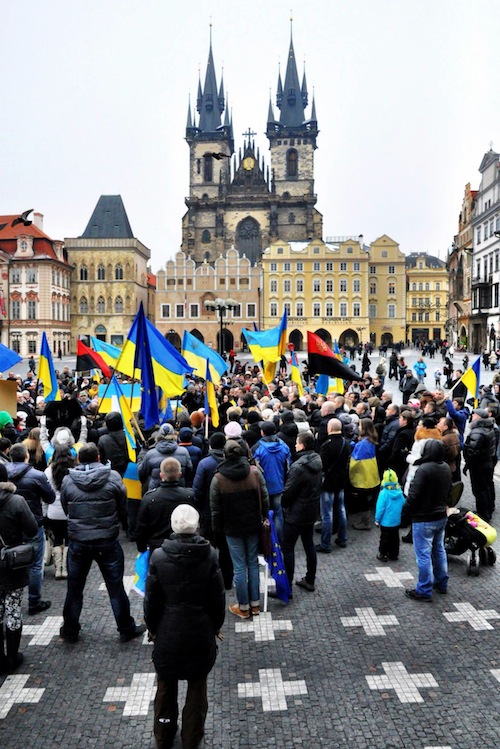 In the Czech Republic they reside mainly in Prague, but they are also welcomed in the other major cities, especially the large industrial centres, where there are greater chances of finding a job. In order to work, they adapt to menial tasks, ones the Czechs do not want to do. The men are engaged in a large majority of construction sites or in factories, often as manual labourers without qualifications. The women too are given more modest tasks, working as cleaners, dishwashers in restaurants and canteens. Being the clerk or waitress is already a step higher.

The common goal for them is putting aside some savings to be sent home to family members. However, very little, since the Ukrainians, out of all foreign workers in the Czech Republic are the ones who receive the lowest average wages, less than 15,000 crowns per month. According to statistics approximately half of Czechs view them in a bad light, haughtily.

“Maybe it’s true, we are looked down upon a bit, but basically I am grateful to this country for welcoming me and giving me the opportunity to work. The Czechs are Slavs like us, and also the language is similar to ours”, notes Oleg, a graduate in economics in his country, who works here as a builder and everything he manages to put aside is sent to Ukraine, where he left his wife and two children.

Almost all of them are part of the migratory wave which began after the collapse of the Soviet Union, fleeing from a country which is increasingly heavily affected by the economic crisis. The inhabitants of Ukraine are about 45 million, but there are more than seven million who have chosen the path of emigration.

“The people who attend our church mainly come from the western part of the country, Transcarpathia, one of the poorest regions, the one with the most unemployed”, states father Stojka, who recalls that Transcarpathia itself, from 1918 to 1939 was part of Czechoslovakia.

In front of the church, there are very few who are willing to comment on the current situation of their country. There are even those who imply possible fear of reprisals against family members still living at home. “The most basic rights are trampled upon back home, and the state often acts like an enemy”, said a woman who goes away immediately, giving the impression of someone who fears they have already said too much.

“This rebellion frightens us, a civil war would be a tragedy, but we are a country that needs a radical change. Things cannot go on like this”, said another who prefers to remain anonymous.

A few hours later in the centre of Prague, Ukrainians gather, who despite the fear, decide to take to the streets and join the protest crowd in Kiev. There are a few hundred people. They march along the streets of the historic centre and then group together with banners and flags in Old Town Square.

The slogans target President Yanukovych, who is accused of trying to divert the country from Europe and wanting to sell it to Putin’s Russia. “That guy is a dictator who is reducing Ukraine to famine and wants to bring us back under the rule of the Kremlin”, says a heated young man, who claims to be in Prague for study, and shows some pictures of protesters being beaten by police in Kiev.

“We are surprised by the inertia of the EU towards this massacre. Brussels has so far been unable to do anything concrete for our countrymen who are fighting for the most basic rights of freedom and against the arrogance of this regime”, a girl says intervening, with the look of a student. “Our people are the most ill-fated in Europe. After all the misfortunes of the last century, from Stalinist totalitarianism, to hunger and plague, not to mention the Chernobyl tragedy, now we are faced with the threat of civil war”, whispers Olga, close to tears, a graduate in history in her country, who is here in Prague to earn a living doing cleaning by the hour in a hotel, and homes of the wealthy. With only one dream: to soon return to her homeland.