Home  »  History   »   The solution for the “Christian issue” in communist Czechoslovakia

The solution for the “Christian issue” in communist Czechoslovakia

Last year marked the seventieth anniversary of Akce K, the operation aimed at the illegal and violent mass liquidation of monasteries and Christian orders in a country that had just fallen into the abyss of totalitarianism

Planned a year before its execution – in April 1949 – Operation K reached its peak between April 13-14, 1950, known as the “night of St. Bartholomew”, two years after Klement Gottwald seized power. In January, the Ksč Central Committee – the Czechoslovak Communist Party, a direct effluence of Moscow – had defined a multi-stage plan against the Church who was unwilling to swear an oath of loyalty to the regime. The plan’s ultimate goal was to prevent members of the orders to escape the grip of the dictatorship.

The Ksč decided to act quickly and the operation was entrusted to the machine-man and secretary general of the party, Rudolf Slánský, the second most important figure after Gottwald, architect of the great purges eliminating political and civil opponents (before ending up hung by his neck in 1952 after being charged with espionage). 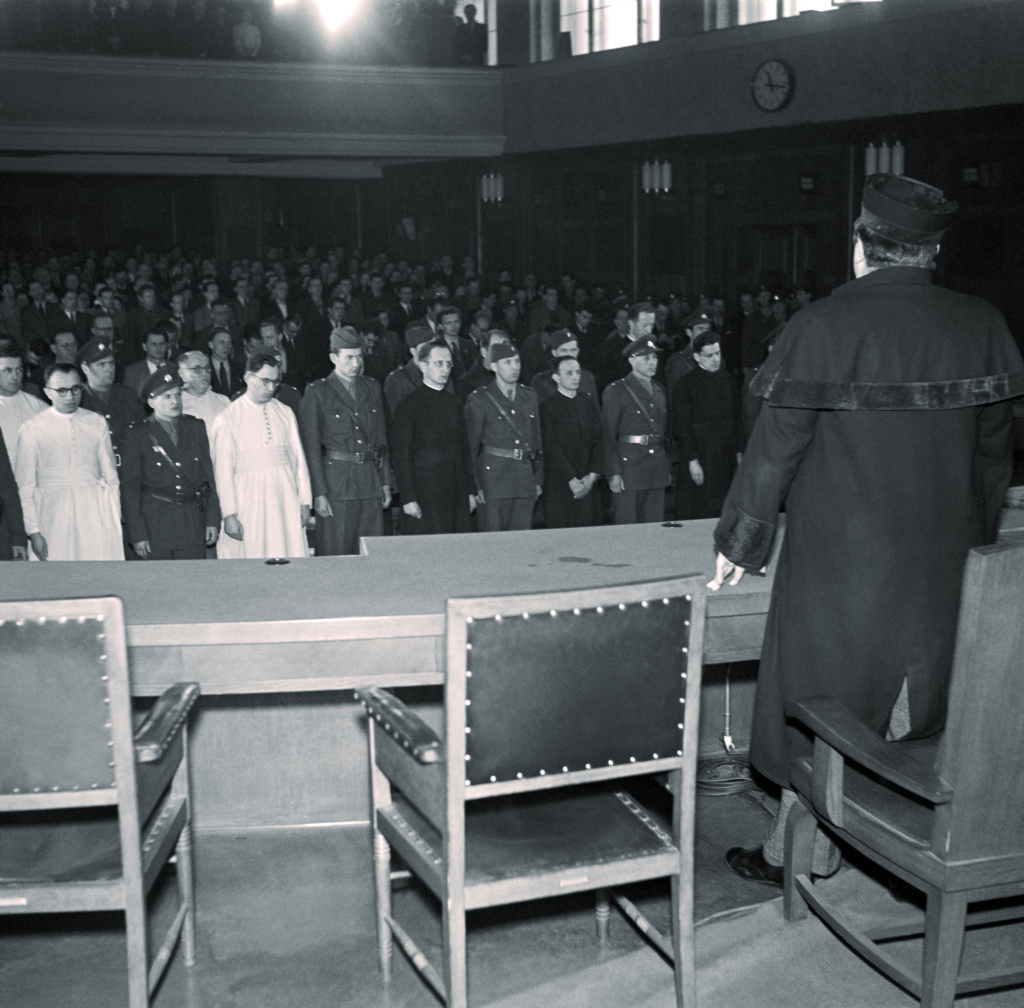 The Operation K (“K” stands for klášter, “monastery” in Czech) was an event of historical significance in Czechoslovakia of the time: present in Bohemia and Moravia for thousands of years, the religious institutes and monastic orders suffered a pillage that had never occurred under any other empire that had ruled over this territory. An absolutely unprecedented event. Akce K represented a powerful signal to those defining themselves as Christians; it was committed just a few years after the fierce Nazi occupation, which also had a very heavy impact on the religious communities.

The eradication was twofold: on one hand it was a real expropriation, an arbitrary confiscation, in accordance with the communist tradition of forfeiting the goods of others; on the other, the de facto suppression of religious orders, which hindered the homogenization of the Marxist thought in Czechoslovak people. The persecutions of the most prominent religious leaders started since the beginning of the regime; only later Akce K carried on war with explicit intention of resolving the “Christian issue”. A real cultural assault for Czechoslovakia, between demolitions and destructions.

More than two hundred ecclesiastical institutions were liquidated, the confiscated assets were forfeited by the party; 2.376 monks were imprisoned, and dozens of orders abolished. The cultural heritage of the monastic buildings was viciously plundered. The “cultural destruction” able to destroy the Catholic identity was systematic: vanished shrines, destroyed original writings, damaged furniture, ruined works of art, burned down libraries. A lot of valuable works were lost, others were seized by the Ksč leaders. Even today, the atrocious damage caused by the state aggression to the ecclesiastical congregations is immeasurable.

From a communist perspective, the extermination of the monastic orders and its members had to be complete: there was no room for dissent from the party line. Body and soul, the Czechoslovaks were collectively owned by the state and proletarian confiscations were a coherent programmatic necessity of the Ksč. Therefore, Action K was able to plant the seed of totalitarianism even more deeply in the society. However, ironically – but fully revealing the treacherous Stalinist planning – the ecclesiastic orders were never formally abolished, even if youth organizations, education and cultural centers, as well as publishing houses that were connected to the Church closed their doors.

The Czechoslovak people were bewildered by the actions of the regime, which on the other hand discredited the institutions connected to Action K, guilty of being “subversive” and “against” the Republic. Accused of very serious crimes – after torture and drug administrations – the victims of the regime were exposed to fake trials orchestrated by the party, as was the case in the USSR. Particularly, the Praguian prosecutors, completely immersed rather in the ideology then in jurisprudence, feared that the Vatican could manipulate the masses through the message (very much subdued) of the priests and monks.

The same Slánský came up with the idea that the monasteries were political agitating centers dedicated to anti-statist activities. False accusations and forced-in confessions – but, also blackmail, threats, physical and psychological torture – became practices of the judicial system of the time, under the vigilant eye of the Ksč, which in the violent work of the ecclesiastical expropriation obtained new places for its boundless bureaucracy. For example, the monastery of Břevnov, in Prague, became the State Archive of the Ministry of Interior.

Action K was divided into two macro-segments: the first one took place on the night of April 13-14, 1950 (more than nine hundred Czech monks were taken prisoners, and almost the same numbers in Slovakia). The second took place under the same conditions between April 27-28. Somber, dark, barbaric nights. Akce K was systematic and well-planned: every Czech monastery was identified and accurately persecuted by the agents of the much-feared secret police of Státní bezpečnost (StB).

After the expropriations, mass deportations begun. The young monks were separated from their older fellows and sent in “re-education” camps, other prisoners were instead persuaded by force to abandon their calling, and others were sent to forced labor. Akce k achieved a real extermination: Franciscans, Salesians, Dominicans, Benedictines, Capuchins and Jesuits were all arrested starting February to March 1950. In the first period, the destructive madness focused on the male orders, but between July and August 1950, a similar fate touched the female congregations as well (Akce Ř, from “řeholnice”, meaning nun).

Among the most famous names of the religious communities targeted by the regime are František Mikulášek, Jesuit, director of the monthly Dorost and spiritual director of youth associations, Augustin Machalka, Premonstratensian abbot of Nová Říše in Vysočina, and Adolf Kajpr, Jesuit, director of Katolik, who had already spent four years in Nazi concentration camps. However, there are two figures in particular that stand out above all. The first one is Josef Beran (from 1945 archbishop of Prague and who had previously denounced the crimes of the Nazis from the top of St. Vitus Cathedral, ending up in Dachau), who was kept under house arrest for fourteen years during the communist regime.

The second one, the martyr Josef Toufar, was a victim of Akce K a few weeks prior. He was an active priest in the village of Zahrádka. In 1948 the Communists forced him to move to Číhošť, where – on the third Sunday of Advent, in 1949 – the displacement of the great cross of the altar in the village church would have occurred miraculously. Thus, Číhošť became a pilgrimage site for many religious people, which frightened the local leaders of the Ksč. Arrested under the charges of staging “the miracle” through a mechanism able to move the cross and then perpetrating “a subversive act against the National Czechoslovak Democracy”, Toufar was transferred to Valdice prison. Tortured, beaten, accused of homosexuality and pedophilia among others, he died in Prague on February 25, 1950, in the state clinic Borůvka, on Legerova Street, the same place where in 1969, the young Jan Palach would have died of burns. Toufar is buried in a communal grave in the cemetery of Ďáblice: his story began to circulate especially during the Praguian Spring.

It took years until the Church and the Czech monastic institutions recovered from the shock inflicted by Action K: the 1950 strike stayed an absolutely unprecedented event in the story of Czechoslovakia. Not even after the “normalization” of 1968 were there repressions and tortures as harsh as those of the expropriation that occurred seven decades ago, systematically and symbolically carried out against Christianity in its entirety, as a potential threat to the regime and political rival.

To best strengthen their own power, the communists had not only eliminated dissent, but also the potential figures and forms that stood in the way of the proletarianization of the society. The truth is that the Ksč was scared of the Church and its layouts: and therefore, decided to stone and humiliate it through a violent and brutal operation. But almost forty years later, in November 1989, the accounts were settled: and this time, the stones were those falling from the Wall of shame on the head of a world buried under the ruins of history.