Discovering a little-known and long-abandoned building in Prague that deserves to be preserved. It’s a rare case, here in the Czech Republic, of a secessionist-style station

Right now, Praha-Vyšehrad train station is not really a building that catches the eye. It can be found in the midst of rather anonymous tenements on the left bank of Botič, the small stream that carved a deep valley between the Vyšehrad cliff and the Vinohrady hill. Passing it by, however, it’s relatively easy. Just take tram number 7 to Výtoň and go in the direction Nusle. You almost pass alongside it with a random 14, 18, or 24 having barely crossed Albertov. Yet, if you don’t know that the station is there, you don’t notice it.

The reasons are simple. Firstly, Praha-Vyšehrad is a small building in poor shape. It should be white but by now it’s sprinkled with dark spots, some due to humidity, with the plaster already off from the other sides. The interiors are semi-demolished or collapsed already, just by looking through the broken windows: the floors are covered with splinters. The only things in good shape are the padlocks and railings that prevent access to the place.

Secondly, the most well-known side of this station, the one that pops up in the photos accompanying articles referring to it, is not the passenger’s entrance but the rail tracks one. And it’s also obvious: it’s a train station, and choosing the rail tracks photo allows an instant connection. Not that it’s particularly difficult to reach the station from this other side, as well. On the top of the track bed, the protection consists of a long (and wretched) wire mesh, already torn down in places by someone going between the tracks to do trainspotting (at least judging by the number of syringes on the ground).

Nonetheless, walking among those tracks during day time is not particularly advisable: the station is centrally located, the trains travel very slowly and therefore are also very silent. Those with untrained ears could have a nasty surprise.

Even if the station is closed, trains pass by Praha-Vyšehrad, and quite a few of them. The train station is located between the Smíchov one and Hlavní Nádraží, meaning on the line Prague-Pilsen-Munich and its rail tracks, three of them, have an important role in the so-called priority management. In other words, a train of little importance (e.g a local one to Rakovník) stops there to be overtaken by a more important convoy (like an intercity Ostrava-Pilsen) which has to make up for the delay.

Obviously, a priority management point doesn’t need a station to function, signaling lights would be enough, which are now controlled remotely. In fact, Praha-Vyšehrad was closed already in 1960 and the reason is intuitive in this case too. Because it’s located in the Botič ravine all expansion is impossible. Furthermore, the tiny station is around corners, which in the past has caused several railway accidents, some of them fatal.

So, you might ask, what is the reason we still hear about it and why the need to save it? It’s a small, run-down building, with no glorious history nor a forefront of technology. We don’t even know for sure who designed it in that distant 1872 (although, most likely it was either Antonín Balšánek, architect of the National Museum, either Jan Vejrych). The answer to our why is simple, and it’s enough to see beyond the degraded image that covers it to understand.

Praha-Vyšehrad is simply beautiful. And it’s a rare case, here in the Czech Republic, of a secessionist-style station. It’s not built in the opulent style, all steel and stained-glass windows like the ones characterizing more famous buildings like Gare d’Orsay in Paris or Hlavní Nádraží. It’s more somber, slightly mixed with the neo-Renaissance style which here is highly famous due to the Theater and National Museum, just to name a few.

Therefore, even in this case, we find ourselves in front of a unique building for various aspects, merely aesthetic. It was declared a national monument in 2001. Not that the building was in a good state at the time. In the 1980s, the communists tried to renovate it. And not because they had planned to reopen the station for passengers but because at the time the operators managing the light signals already referred to were still working there. The roofs were replaced and some decorations restored, because apparently not even the communists were immune to the charm of the bourgeois architecture. Unfortunately, the operation brought only damages, mainly because of all the water infiltrations that weakened the solidity of the structure. At that point the best solution was to move the operators somewhere else and manage exchanges and signals from a distance.

With the rise of capitalism, the situation finally… continued to deteriorate.

Until 2001, nothing was known of Praha-Vyšehrad, and after the ministry’s decision to turn it into a monument, something changed, but not for better. Several private parties showed interest in acquiring the building, obviously owned by the national railway carrier České Dráhy. In 2007, the Real TIP Estate company brought it to light, and, without wasting time, demolished the shelter between the second and the third rail tracks, obviously without discussing the move neither with the railway authority nor with the protection of cultural heritage. Sanctions were imposed and mid-2008, the new owner presented a targeted renovation project, which was however rejected. The result was that in the next ten years there were no other interventions, except those imposed by the protection of cultural assets, however not sufficient. The roof was covered to contain infiltrations, but the problem is that the already existing ones were enough to mold the wood and to collapse part of the ceiling.

Following these ten years, the Municipality of Prague expressed interest in the train station, now negotiating its purchase – set at 117 million, a decidedly high amount considering the condition of the structure and the consequent renovation works.

The idea is to let Praha-Vyšehrad take the same figure as the previously mentioned Gare d’Orsay, or transform it into a museum and, particularly, install the Slav Epic, the famous Alfons Mucha cycle that, in 20 canvases of considerable size, traces the entire history of the Slavic populations. It would make perfect sense at least from a stylistic point of view: an Art Nouveau building which houses Mucha, a painter symbol of Bohemian liberty. It’s also situated close to Botič, cited in the Czech hymn in the verse “voda šumí po hlučinách”. But it’s not a definite solution. In primis, because the station is small and the Epic is large, so it’s not clear at this point if the whole series of 20 paintings could fit. We must underline that the paintings of the Epic should be admired from a certain distance to be appreciated. In fact, this would exclude the little station from among the places suitable for hosting this monumental work, but better there than in the basement of the National Gallery. Lastly, we must point out that the paintings of the Epic are quite fragile, so the renovation works, already impressive, should include a series of specific additional measures just for this, with possible longer restoration times.

In any case, the decision should be made quickly, as the worsening of the conditions is even more noticeable as years go by. And until the municipality will have acquired it, the most probable fate is that the station will run-down on its own. 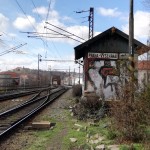