Home  »  Art and culture   »   Kateřina Šedá, at the Venice Biennale the artist who awakens tourist cities from torpor

Kateřina Šedá, at the Venice Biennale the artist who awakens tourist cities from torpor

The Venetian pavilion of Kateřina Šedá is an alarm against showcase cities. The Czech artist is not new to trying to protect the human side of urban centers

The pavilion of the Czech and Slovak Republics at the Venice Biennale does not cease to amaze us. Having been built in 1926 by Otakar Novotný, a pupil of the great Jan Kotěra, in ninety-two years of honorable service it has hosted countless and illustrious installations, works of art and architectural exhibitions. However, one would never expect, when crossing the doorway of its famous portal, to find oneself in front of an immaculate circular reception desk behind which courteous and smiling employees in white uniforms sit.

Actually, the estrangement caused by this lightning quick short-circuit seems to leave most of the patrons in a state of confusion. After the first instant, some of them cautiously move towards the counter, looking around with the typical embarrassment of someone who feels like an intruder, or at least out of place.

At the back of the room, surrounded by flags and flooded with light from the immense skylight, stands a large screen that alternates a red logo with urban images. It really has the air of the impeccable reception of a large multinational corporation or government agency.

No fear, no sacrifice. The glorious pavilion that belonged to Czechoslovakia has certainly not been downgraded to a service building to welcome visitors, nor has it been sold to any supranational agency for representation at the Venetian kermesse. On the contrary, the inspired idea of the curator Kateřina Šedá, born in 1977, seems to provide international visibility to the pavilion, interpreting the theme “Freespace” of this 16th Architectural Biennale.

Despite many patrons tending to explain to themselves that it is certainly an immersive installation beyond the usual new media, in a vain attempt to minimize the disorientation, what you find in the pavilion is effectively a real reception: the reception of the Venetian headquarters of the UNES-CO (United Nations Real Life Organization). This fictitious organization is the idea that the curator has devised to bring to public attention the difficulty of leading a “normal life” in the cities protected by UNESCO (the real one) due to the tourist overload. Over 1,000 sites have been registered on UNESCO lists since 1946, including a dozen Bohemian cities. The fictitious association, at the base of whose name lies the anagram “Co město unese,” was born with the intent of bringing the warmth of everyday life to those places as wonderful as frequently reduced to precious scenery for the fleeting glance of tourists.

No location could give a voice to such a problem better than Venice, a paradigmatic case of exasperated tourist overcrowding. The regular invasion of the city’s famous sotopòrteghi (alleys passing under buildings) and calli (the typical alleyways of the city), along with the indisputable economic advantages, leads to a radical alteration of the habits, and sometimes the freedom, of those who live in honor and commitment of the city of art. Statistics show how the historical center of Český Krumlov, a UNESCO jewel in Southern Bohemia, is virtually uninhabited today, a destiny that could also touch Venice.

From the part of Šedá, there is not simply a critique or an observation of the phenomenon, but a concrete proposal to mitigate the partial depopulation that this causes in its most threatening repercussion: for the city to slide into becoming a sort of theme park in which one admires wonders coming from the past. Such a crystallization would not only bring discomfort, isolation and solitude to the residents, but in her opinion also a less authentic experience for the tourist who visits them.

Through UNES-CO, the artist takes advantage of the Venetian visibility to broaden the public consciousness on the topic, while looking for volunteers willing to live in the enchanting historical center of Český Krumlov, and bring the warmth of the “normal activities” among those distorted roads, documenting everything on live Tv.

Šedá, known to the public having taking part in group exhibitions “Documenta 12, Kassel”, and “The 5th Berlin Biennal, Over and Over”, is not new to such operations. The peculiarity of her research consists precisely in acting as a sort of director of articulated collective initiatives and public events, coordinating the public itself within her own works capable of hybridizing the urban scale to the intimate dimension of private relations. This masterly ‘intrusion’ into such a vast and delicate field earned her the title of “Architect of the Year” in the Czech Republic last year, as well as the prestigious curatorship of the Venetian pavilion.

Animated by the idea of art as a formidable means to act in this field, the brilliant and award-winning artist from Brno considers the production of a work or an exhibition only the last step in a complex process that “identifies the artistic object as a therapeutic tool”. This explains the friendly language, both engaging and ready to turn the rigour of an austere museum into a welcoming space, sometimes preferring to hide the word “art” where it could compromise the relationship of trust established with its audience of protagonists, even intimidating it.

In her double-scale operations, Šedá remains on the sidelines and focuses on the meeting point between human relations and urban planning, between everyday life and built-up space, involving entire communities in an attempt to mend social and urban fractures. Like any good director, she therefore, as she likes to define herself, her role is to arrange, plan and coordinate, delivering the scene to the protagonists and let things take their course, a modus operandi perfectly fitting also to the architect’s figure.

This way, curious urban survey systems come to life, in addition to original spontaneous mappings performed by the inhabitants of a certain place as well as spectacular synchronizations of entire communities. Precisely regarding this latter strategy, the well known performance Nic tam není (There Is Nothing There) should be mentioned, thanks to which Ponětovice – a village in South Moravia, saw three hundred and fifteen of its just under four hundred inhabitants, perform the same gestures at the same time for the entire day of Saturday the 5th of May 2003.

With the project Nedá se svítit I./No Light II. the inhabitants of Nošovice on the other hand, were protagonists of a decidedly sui generis urban mapping campaign. In 2010, Šedá asked them to lay out on tablecloths what they believed to remember of the old urban landscape before the town’s layout was drastically modified by a huge industrial settlement built in the previous two years.

However, these are just some of the most famous among the instruments that populate the unusual toolbox of an artist constantly looking for a hybrid way between social and urban investigation to trigger an exchange between people in their places of daily life, returning an often absent or lost dimension.

Her Venetian work calls into question the progressive “coldness” of UNESCO inhabited sites, in which neither children can be seen going to school nor clothes hanging, not even from secondary façades.

With her usual amiable care, Šedá effectively declines the “Freespace” theme by tackling it according to Adam Budak, curator of the Národní galerie in Prague, as well as the pavilion commissioner, in an even subversive way, showing us the “free space which is not there”.

The UNES-CO pavilion can be visited until November the 25th, 2018 at the Giardini della Biennale in Venice. 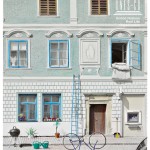