The restitutions blessed by Klaus 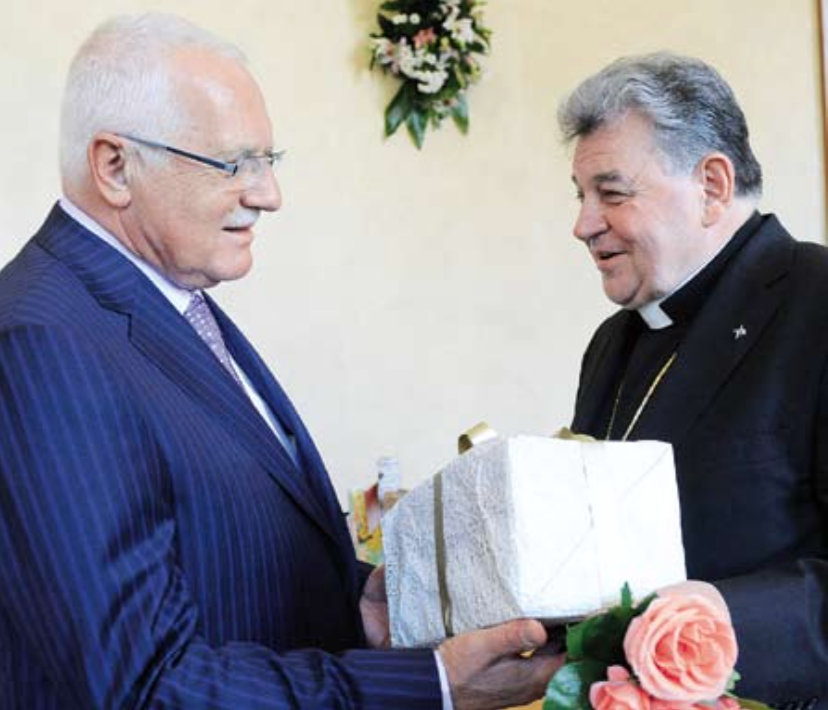 Despite widespread public opposition and vehement protests from the Left parties, the bill on the restitution to Churches and religious orders of confiscated possessions during the communist regime (in former Czechoslovakia), is about to be approved. Prevailing is the will of the present centre-right government, which is determined to put an end to an issue that has been going on (with alternating events), for more than twenty years. All this, needless to say, with the blessing of President Vaclav Klaus, who now seems to have changed his mind compared to the past and who never appeared to side with the most fervent supporters of restitutions. If anything, it was quite the contrary.

The government bill, which has already been approved by the House of Commons at first reading, foresees the restitution of 56% of the patrimony – especially buildings, farmland, woodlands and lakes (considered to total around 260,000 hectares), amount to about 75 billion crowns. In addition to that, a reimbursement has been taken into account as a sort of compensation on the total sum of 59 billion crowns (of which more than 50 billion to the Catholic Church). The money will have to be refunded progressively over the next 30 years, together with appreciation.

The agreement within the government, however, was not without hitches. Last December, in fact, the populist Public Affairs party, the smallest of the political forces that make up the majority, had threatened to give up any support and forwarded the proposal – rejected by the (ODS and Top 09) partners of the government – to postpone the restitutions to a more favourable time, from an economic point of view. Decisive was the meeting (in early January, just a few hours before the council of ministers), between Cardinal Dominik Duka, archbishop of Prague and head of the Czech Church, with the recalcitrant leaders of Public Affairs.

Even Cardinal Duka – in view of the remaining difficulties and the risk that the deal might be put off – had defined the restitution plan as “historic”, without failing to add: “We want to maintain this agreement and we believe the government wants do the same. It would not be favourable to anybody if the churches decided to appeal to the courts to enforce their rights”. An explicit reference by the high prelate to the commitments made by the government in Prague after 1989, as well as the Constitutional Court ruling of 2010, when the High Court described the inertia of the Czech legislature, to resolve the issue of restitutions, as “contrary to the Constitution”

Public opinion is largely against it
The government’s intention to reach a settlement to the dispute with the churches has clashed with widespread public opposition. According to a number of surveys, more than 70% of the population is against it. Little wonder, if we consider that this is the country with the highest number of people who do not identify themselves with any religion, and who define themselves as “non-believers”.

In judging this attitude, here are the words of Cardinal Miroslav Vlk, the former archbishop of Prague, when we interviewed him in 2009, on the eve of the papal visit to the Czech Republic: “This public opinion trend is a sad legacy of the communist regime, because at that time there were no legal rights and the communism was a period of injustice. Unfortunately, people do not ask themselves who this property belongs to, but rather, they tend to ask why the Church requires it. Communism has destroyed people’s sense of righteousness and justice”.
However, in this respect, people must know that among those who oppose any form of restitution, there are also people who were victims of the communist regime. It is the case of the writer Lenka Prochazkova, already a signatory of Charter 77 and daughter of Jan Prochazka (the intellectual supporter of the Prague Spring, purged after 1968), who took the sensational initiative of suing Premier Petr Necas and his ministers, accusing them of abuse of power and mismanagement of state property and did likewise a few days later, against Cardinal Dominik Duka, accusing him of attempted theft of State property. Prochazkova’s exceptional action is based on the theory that the properties involved in the issue of future repayments were – in 1948, year of the communist coup – no longer the private property of churches and religious communities. According to this thesis, even previous to that date, the land reform, implemented by President Tomas G. Masaryk in 1919, had excluded the private nature of the churches possessions, including any rights to dispose of them freely. Therefore, they were to be considered as public possessions, placed under church administration.
From a closer examination, we can see that it is the same position held in 1998 by the Zeman government – the Social Democratic executive in office during that period thanks to an opposition pact with the ODS Conservatives. And it is what the two parties of the left opposition also maintain today. The Social Democrats of the CSSD maintain that the properties in question are used, instead, to create a foundation or fund – the proceeds of which – are supposedly used to finance the expenses of the churches. According to the Csdd, the current plan is flawed because it is excessively generous.
The KSCM Communists have, instead, advanced a proposal – which was immediately rejected by the House – to organize a referendum on the issue of church restitutions. “On such an important issue, all citizens should be called on to express their opinion and not only the 200 deputies and 81 senators”, the KSMC leaders said recently, but were unheeded.

On the other hand, we must not underestimate the arguments brought forward by those who are pressing for a quick definition of the issue. In first place, there is the risk, as already pointed out, that the churches might resort to legal action, exposing the state to the risk of having to pay even higher compensations. It should be noted that even in 1991, after the fall of the regime, the state had given assurance that it would have dealt with the restitutions issue.

It should not be forgotten that there are hundreds of municipalities in the Czech Republic, that have vast amounts of land in their territories, including properties, which are due to be returned in the future. They include real estate, which the municipalities are obliged to take care of, but which they do not actually own. A situation that has on several occasions upset the development plans of municipalities (for example, in obtaining EU funds, given the uncertainty of the situation).

And then, we have to consider another quite important aspect: the Church, with its organization, shows to have the ability to administer the properties from an economic point of view, properties that are unproductive at the present moment.

Klaus, the balance of power
As mentioned previously, many observers consider the role of Klaus as being fundamental and underline his change of direction compared to the past, especially towards the Catholic Church. Whilst previously, the President was considered the main obstacle to reaching a satisfactory solution on the church issue, lately his rather friendly attitude towards the Catholics is quite surprising. Some observers even suspect that Klaus wants to attract the sympathies of followers, in view of the end of term of the presidency and his planned political career.
Actually, one of the most significant stances came from the Catholic world – from Bishop Tomas Halik, professor of sociology at the Charles University and president of the Czech Republic Christian academy, who publicly declared that he does not consider the new position taken up by Klaus towards the Church as being unaffected. “Only an ingenuous person would believe that he is totally sincere. His is a political strategy”.

Words, among other things, that have aroused strong reaction from a few supporters of Klaus, in first place, the presidential vice chancellor Petr Hajek, who, in the wake of the controversy, went so far as to question whether Halik was a true priest.
However, the different attitude of Klaus towards the Church, actually took place after the changeover as Archbishop of Prague and head of the Czech Church between Cardinal Miroslav Vlk and Cardinal, Dominik Duka. The relationship between the former and Klaus were always characterized by friction and controversy. Cardinal Vlk in 2009, just months before going into retirement, told us of his very strong views on the relationship between Klaus and the Church: “He always treated us like a tourist club and nothing more”.

Very different, instead, the relations between the Head of State and the new archbishop on a personal level, as well as a purely political one, in view of the fact that, since the beginning, Duka showed to be (more or less) on a similar wavelength with the positions of Klaus.
This reached its peak on 28th September, the day of St. Wenceslas (the national patron saint), when Klaus – who had gone to Stara Boleslav for the traditional Mass – called for a return to traditional and national values, criticizing what he called “opportunistic modernism”. On that occasion the President also called on the Church “to assert its authority by speaking with a louder voice on social issues” and urged Catholics to stand against what he called “the deception of the welfare state, a system that destroys individual creativity”.