In the Czech Republic they have returned to the headlines of newspapers, the Tv news and internet sites, causing debate amongst politicians and columnists. The question is simple: what should we expect?

Nationalism is coming back into force and it is not a coincidence that it is happening now. In a climate that has already been intensified and corrupted by the economic crisis, the chance of coming into the open is represented by a problem which has been brooding in the republic for years: the problematic co-existence of the czech people and the roma minority.
In a country where immigration certainly isn’t getting out of control, in both factions of the extreme right and in a small but growing section of the population, a one-way spread of an atypical xenophobia is becoming evident. The targets are the nearly 200,000 Roma people who live in the Czech Republic, representing around 2% of the entire population, whose chances of integrating into the majority seem to be getting slimmer. 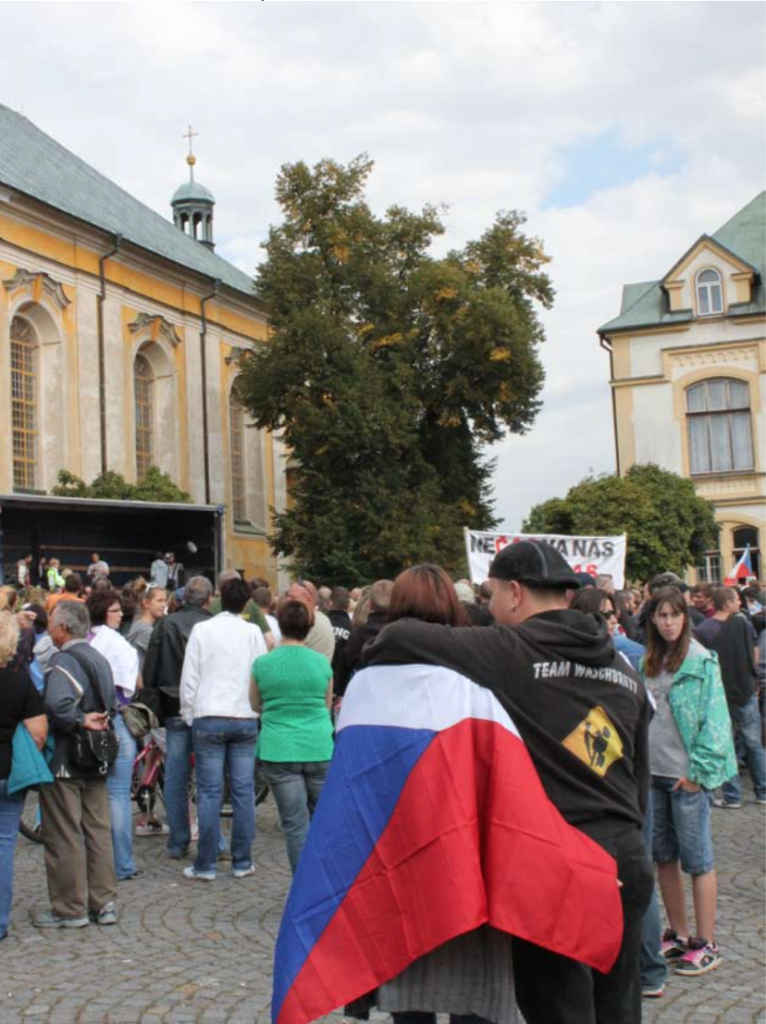 The gypsy situation has been problematic for some time in the Czech republic, having got worse and worse since the end of the obligatory work scheme imposed by the regime until 1989. A difficult co-existence which now has been worsened by the weekly protests against roma people both in the Ústí nad Labem region and in the capital. These protests are the extreme consequences of a series of episodes of petty crimes and violence to the detriment of the local majority in the towns of Varnsdorf, Novy bar and Rumbark. If the fierce allegations of the citizens are to be believed, shoplifting, theft, vandalism and violence are now always in the agenda.

The situation degenerated between August and September. Since then in these villages in the Sudetes numerous densely crowded public gatherings have followed,often spearheaded by exponents of Dělnická strana socialni spravedlnosti (Dsss), or the party of Workers of social justice, “the only czech nationalist group,” at least according to the prague-based leader Jiří Petřivalský.

They in fact lead the the Varnsdorf protests with handheld banners and fierce chants. It would however be misleading to think that the gatherings only involved organizations. The majority of participants were normal citizens frustrated by a situation which is now unbearable in their eyes.

The atmosphere surrounding a table of a bar near Wenceslas Square is rather different. Here we met Jiří Petřivalský, the prague-based leader of the movement known with the acronym DSSS, who spoke to us about the party. Politics impose labels, which is why through our slogans we are blurting out the points in our program. A successful mask but they are two sides of the same coin.
Jiří, who wears a heavy leather jacket with a brooch of the party pinned on the collar, wants to make three things crystal clear: “Firstly we believe it is necessary to impose compulsory school attendance on the Roma people,” he says firmly. He hesitates a second and continues, “a general cut on state aid is necessary, and the exclusion of social allowances for persistent offenders”. Subjects as these, which if put into context with the general unease and violent protests, resonate strongly with large proportions of the population. A message directed at those who now more than ever, are disheartened by a wide accumulation of problems.
The frustration of the inhabitants of Ústí nad Labem is understandable just by bearing in mind that in a small town such as Varnsdorf for example, the unemployment rate is about 20%, whereas the national average in the Czech Republic is 7%. Out of all the Roma people there, practically nobody works, but the state benefits continue to be offered and collected with punctual frequency.

It is this dissatisfaction and powerlessness of the citizens against the state mechanisms, that makes the DSSS gain popularity. The prague leader declares himself totally dissatisfied with the work of the current government – a coalition of the centre-right, headed by the Civic democratic party, whose total inertia in dealing with the gypsy issue has done nothing but intensify the situation. In the last elections from May 2010, the party got only 1.14% of the votes, but now the percentage could be much higher. 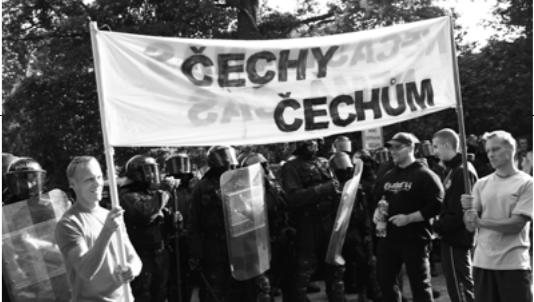 Far from the Tv adverts glorifying the expulsion of Roma people from the Národní strana, or National party, whose activity was stopped by the supreme administrative court on the 17th August this year, this right are unraveling populist plans which touch public opinion. Besides, it seems that certain tendencies can be accepted also very high up: tolerance towards extreme right sentiments fade in the rooms of power. This is demonstrated in the Ladislav Bátora case, who despite his militant past in the National Party, was nominated as chief of personnel and deputy executive director of the Ministry of education. Bátora only decided to leave his post after a long string of controversy, maintaining however a role as a councillor, and has hinted at the possibility of returning to politics.

In the Czech political environment, there is a vacuum between the Civil Democratic party and the nationalists. An inviting opening for a strong right-wing party with a potential place in parlament. Insistent rumours go even as far as the name of current president Václav Klaus, whose term of office ends in 2013, as a leader of a party modelled on this template. It is not such an odd idea if you consider that it was Klaus himself who defended Bátora from the controversy following his nomination as councellor. The political-economic conjuncture seems to be favourable, whilst the recent events have been creating the right background.
In addition to this, in a large proportion of Europe, the extreme right have already recorded important electoral successes: from the last one in Finland where the True Finns party managed to gather 20% of the votes. In nearby Hungary the openly nationalistic Jobbik party, entered parlament in 2010 getting 47 of the 386 seats. It is a tendency which brings a smile to Pavel Szudár, a waiter by trade and leader in Prague of Dělnická mládež, the youth party of Dělnická strana socialni spravedlnosti organized into an independent group. “Personally I find the project of the party of the Magyars very interesting,” he confessed to us in the interview given alongside his friend Jiří Petřivalský.

It is clear that the issue of the right in the Czech Republic remains a topic to be approached with caution. The Varnsdorf protests have reached the capital through the chants “Let’s send the gypsys to Prague!” The foreign minister Karel Schwarzenberg has blasted the protests on numerous occasions, which are parades for extremists. One must not also forget that the DSSS themselves are basically successors of the old Dělnická strana (workers party), whose activity was stopped by the supreme court in February last year due to an extremist ideology resulting in crime.

Currently, overlooking the current events, the only option is to look towards the next elections, the ultimate measure of all political speculations. Only then will the Czech Republic be able to assess or deny the growing force of their right.
If the barrier in parlament of 5% remains an unreachable objective for any openly nationalist organization, it would not be for a more moderate one which is supported by more popular ideas. Another threshold must also be taken into consideration. The much desired 3% which provides access to public financing of the parties.

The current situation could favour the progress of a strong charismatic leader such as current president Klaus, who is capable of getting a strong grip on the overall public opinion. It is obvious that the Roma question must be discussed with more care and concreteness. Starting from these premises a new right-wing party has all the cards necessary to assert itself, and exceed the percentage needed for entry in parlament. For now it remains uncertain, therefore the only thing to do is rewind the ribbon and go back to asking ourselves, what should we expect?