The visit to Prague of the Italian Undersecretary Michele Geraci and a background doubt: who benefits from the agreements with Beijing?
For the Czech Republic, China is the second country of origin for imports. Conversely, China is the 18th state of Czech exports’ destination

The great optimism of Michele Geraci for the “extraordinary outlook” of the collaboration projects with China, compared to the partial disappointment, if not a complete one, shown by his Czech counterparts on the same matter. This was the focus subject of the recent visit to Prague of the Undersecretary of State of the Italian Ministry of Economic Development responsible for Foreign Trade. Two days with a tight schedule filled with meetings and conclusions with the press representatives.

One could ask: what is the connection to China, if we talk about the visit of an Italian government representative to Prague? The answer is simple: Geraci – a 50-year-old Palermian, Northern leaguer with countless Alberto da Giussano badges on his blazer – is considered “the Chinese of the Italian executive” and the man who devoted himself most to Italy, the first G7 country, for signing the memorandum of understanding on the New Silk Road.

Some reporters accuse the Undersecretary of having some sort of obsession for the Dragon and of willing to do anything to please Beijing. We don’t know to what extent this criticism is founded, but certainly, Geraci – who has been recently awarded the title of Knight of the Crown of Italy for having contributed to the knowledge of China in Italy – continued talking about the same topic in Prague as well, particularly about the vast cooperation project launched by President Xi Jinping. Vast enough to be considered nowadays the major strategic goal of the Asian power. 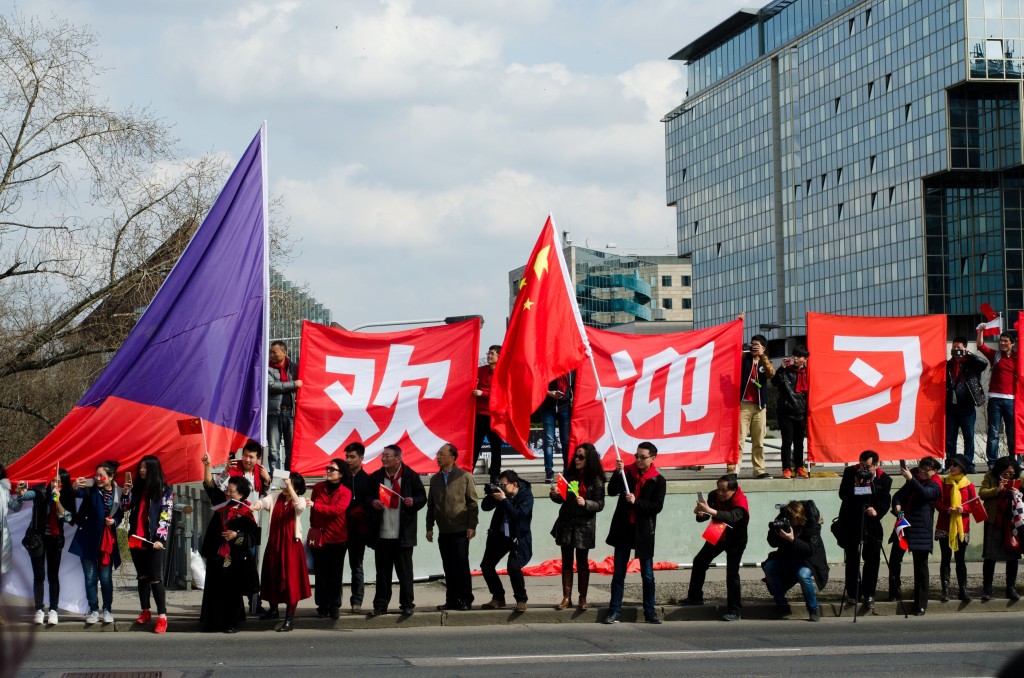 We must mention a few other aspects. The first one is that, to talk about China, the economist Geraci must surely have all the right cards, as demonstrated by the ten years he spent there, teaching in three universities. He speaks Mandarin, and quite fluently it seems.

The second is that Prague has already signed the same memorandum with Beijing three years ago, therefore the representatives of the Czech government who met with Geraci – particularly the deputy ministers Vladimír Bärtl (Minister of Industry and Commerce) and Martin Tlapa (Minister of Foreign Affairs) – have as well all the right cards to say that the relations with the Chinese economic diplomacy hardly brought any advantages to the Czech Republic.

Geraci commented on the disappointment – “or delusion, perhaps, better said” – of his Praguian counterparts as follows: “The Chinese investments in our countries should not be seen in the light of the jobs they create, but based on the exports they are able to generate”. The representatives of the Czech government replied to this statement: “We do not expect Beijing to create jobs in our country, even because we have record unemployment rates. As for our export, the commercial exchange, not only it disproportionately favors China, but the gap increased during the last four years, with a ten to one ratio in its favor”.

The numbers say it all. It is enough to say that during the first two months of this year the trade deficit between the two countries was 90.9 billion Czech crowns, compared to 75.8 billion in the same period of 2018. For the Czech Republic, China is the fourth major trade partner and the second country of origin for imports, for an astronomical value of 569 billion crowns throughout 2018. Conversely, China is the 18th state of Czech exports’ destination, with the amount of 56 billion crowns, relative still to last year.

Truthfully, we must say that – as mentioned in the info material of CzechTrade, the foreign trade agency of the Czech government – many Made in Czech products reach East Asia through third countries, mainly Germany, just like the Chinese goods arriving in Czech Republic are then re-exported to other 75 countries. The specification is appropriate, but in any case, the gap exists still, and it is exceedingly great.

If in Italy, the first supporter of the engagement with China is the Undersecretary Geraci – highly competent but still, after all only an Undersecretary – things change when we talk about the Czech Republic because in this case the head of state, Miloš Zeman, was the first one to stand out. Since he is in office, Zeman became a regular in Beijing, having been there already five times.

When, at the end of 2016, Zeman and Xi Jinping signed the bilateral memorandum of understanding in Prague, the Czech president welcomed the guest with outstanding honors. During a huge reception at the Castle he officially announced: “The Czech Republic will become China’s gateway to Europe”, and guaranteed 230 billion crowns worth investments by 2020. Words that proved themselves to be slightly excessive.

As for the prospect that the Czech Republic – a country without sea or ports – could become the gateway of Chinese products in Europe, it puzzles more than one observer. Implicitly, the Undersecretary Geraci seemed of the same opinion in Prague, when stating he preferred naval transport to rail transport, concerning the New Silk Road project.

Talking about investments, during the last few years, until spring last year, the Dragon shopping in Czech Republic was led by Cefc China Energy, a private conglomerate, with interests in various parts of the world. His number-one, Ye Jianming, was even summoned by Zeman to advise him on Chinese matters.

The fact is that Cefc bought assets in Prague for about thirty billion crowns between 2016 to 2018. These include: the Slavia Prague football team (including the Eden stadium, where it also won the championship), the major involvement in the Travel Service airline company, several hotels, including the Mandarin Oriental in Prague, as well as offices such as the Florentinum. And even more, it holds a stake in the J&T Finance Group. They are all very blatant acquisitions, which have been classified as “PR actions” by some observers, much like saying “all show no go” just to make the front page. These are objectively inefficient investments to create exports, except perhaps for the mechanical company Žďas in Žďár nad Sázavou and the Lobkowicz brewery.

However, the Cefc star set in March 2018, when its leaders were accused of serious financial crimes in China, Ye Jianming himself was detained. This happened with the approval of President Zeman and with the outcome that all the Czech assets of the Cefc came under the control of Citic, a mammoth state-owned company practically controlled by the Chinese Communist Party.

Teachings in the shade of Prague Castle

A final consideration concerns the ability that the Chinese – owners, as mentioned, of Slavia Prague – have shown in these parts in running the “purchase campaign”. Not necessarily the one aimed at strengthening the football team – it is still enough this year to win the championship – but rather the one aimed at using heavy hitters of the Czech leadership in its own interest. The list is long and comprises a lineup of former ministers, deputy ministers, deputies, former leaders of state agencies, an ex-European commissioner and moreover some ex-prime ministers. It would be impossible to list all of them, but we can mention a few particularly significant names. For example, Jaroslav Tvrdík, a former military, who later became Minister of Defense due to his closeness to the Social Democratic party, then number one of Czech Airlines. He eventually managed to direct the interests of Cefc group in Europe, assuming the position of president of Slavia Praha, being a dedicated fan of it.

Another personality who worked in Prague for the Cefc is Štefan Füle, one of the most brilliant Czech diplomats, already Head of the Czech Mission in UK and NATO, then Minister of Foreign Affairs, and European Commissioner for Enlargement and European Neighborhood Policy.

Generally, among other powerful names that contributed and still do, to pave China’s way into Czech Republic, we can mention the former Prime Ministers Petr Nečas and Bohuslav Sobotka, as well as the ex-Foreign Minister Jan Kohout.

Thirty years after the Velvet Revolution (and from Tiananmen Square) in Prague we talk mainly about business and almost at all about human rights. And all this, publicly. However, also in this regard, we must say that the relations with the Chinese economic diplomacy in Czech Republic not only didn’t they deliver so far the expected results regarding investments and export increase, but assume rather the shape of a large operation of politic and geopolitical influence, in which it’s hard to say who has the upper hand.

In conclusion, getting back to Undersecretary Geraci, it is completely legitimate for an academic of his caliber to come to Prague with the inevitable aura of a teacher. Hopefully, he took the opportunity as well to learn some lessons.