On 4th May iin Bratislava, 90 years after the death of Milan Rastislav Štefánik (1880 – 1919), a monument was officially presented in honour to one of the most significant political and military protagonists of Czechoslovakian independence of 1918.
The imposing sculpture, which is nearly eight meters high, is placed in front of the Slovakian National Theatre, on the banks of the river Danube in the modern neighbourhood of Eurovea. The Slovakian Prime Minister Robert Fico, during the ceremony, stated: “This is our Statue of Liberty”. 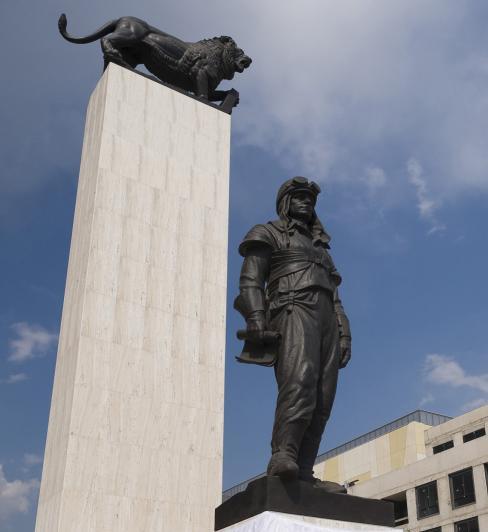 An extremely versatile figure, astronomer, diplomat, aviator, a soldier up to the rank of general – Štefánik, during the Great War, from France, organised the Czechoslovakian legions who fought for independence from Vienna.
It was in those years, during the intense work and effort for national Czechoslovakian independence that Štefánik moved from Paris to Italy, where he became active, to create a Czechoslovakian fighting unit made up of prisoners of war, to be utilised alongside the Italian army against the Austrians.
On 21 April 1918 Štefánik and head of the Italian government, Vittorio Emanuele Orlando, signed in Rome the “Agreement between the Italian Government and the National Council of Czechoslovakian countries” which defined the juridical position of the Czechoslovakian Legion in Italy, thus legitimizing its armed participation in the conflict. It was to be one of the first international recognitions of the future Czechoslovakian state. Once more in Rome, on the 24th of May, during a public ceremony held in front of Palazzo Venezia,
Štefánik handed over the combat flag to the new fighting unit. The same legionaries, just a few weeks later, were involved in fighting with great merit on the Montello and on the Piave.
The last chapter of his life is still linked to Italy, when tragically, Štefánik, who was just 39, less than a year after the First World War, died at Bratislava in a plane crash, while he was returning from the Peninsula. He was on board a Caproni aircraft and with him three Italian pilots also died.