Many positive signs, in early October, starting with the 53rd edition of the Mechanical Engineering Fair in Brno, even if operators are rather cautious about the future, with particular concerns over the Eurozone crisis. 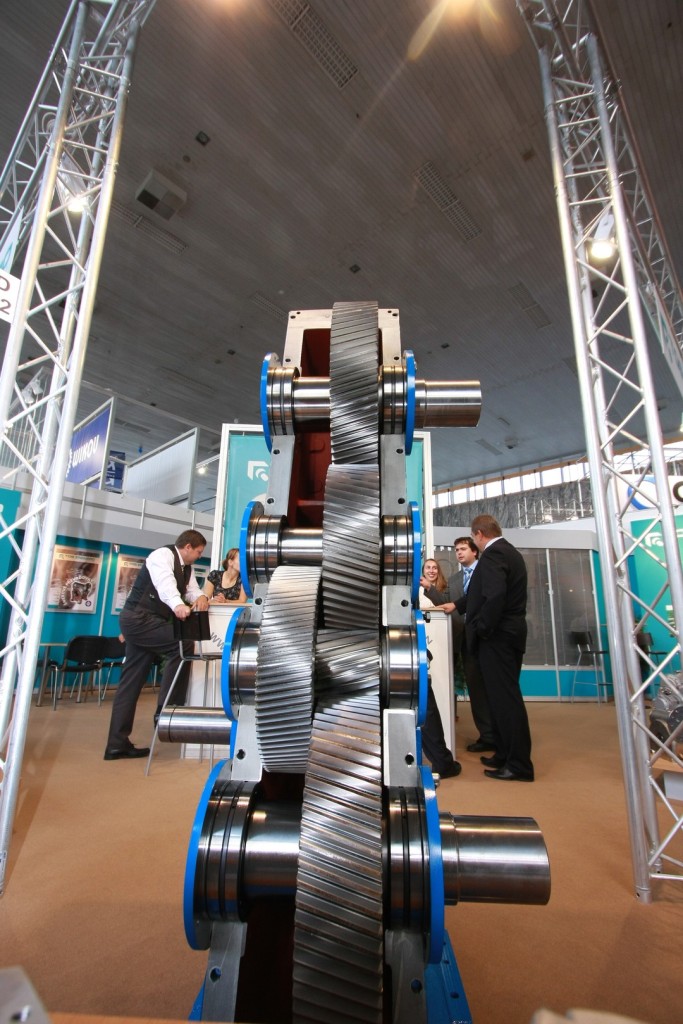 In a country such as the Czech Republic – where industry is the flagship of the entire economic system – visiting the (MSV) Mezinárodní strojírenský veletrh – the International Engineering Fair in Brno – may be an appropriate way to have an idea on how this Country is doing and try to understand the prospects on the horizon.
From this point of view, the last 53rd edition of the exhibition, held in early October, gave a number of positive responses, but it did not resolve the numerous doubts concerning the future of the economy.
Participation of operators was satisfactory, with 1,600 exhibitors taking part, in representation of 25 countries, amounting to an increase of 10% compared to the previous year, with the usual large groups, such as Čez, Sécheron Tchequie, Škoda Auto, Nemak, Škoda JS and Škoda Power.
Well over 540 foreign representatives, mainly German, followed by Slovak, Italian and Austrian companies.
There were also a number of countries that had not participated since 2008, the year in which the crisis began – the exhibition organizers pointed out – and an event that is now considered the largest in Central Europe that covers mechanics, automation, electronics, chemistry and robotics.
After visiting the exhibition pavilion – amid extraordinary machine tools, transformers, solenoids, turbines – one could perceive a more relaxed atmosphere compared to last few years, with less diffidence on the part of companies and a greater desire to showcase their accomplishments and look to the future with confidence.
“This year, our industry is going through a good phase with a greater turnover, in certain months of even more than 20% compared to 2010″, stated Martin Jahn, president of the Automotive industries Association, who is among the most prominent managers of the Volkswagen group. “Many Czech companies, in the last few years of the crisis, have invested in research and innovation, and this proving to be a definitely positive factor”. Inevitable, on his part, a reference to the eurozone events of the last few months, larger export market for the Czech Republic. “A few worrying signs for next year, that it would be a mistake to underestimate.”

Many innovations in the foreground
The exhibition in Brno is also a showcase of the trends that are emerging in the fields of mechanics and technology. From this point of view, the energy sector, with its numerous innovations, was a key subject of the fair. Firstly, in terms of technical solutions to be adopted in the production process, with an increasing attention to cost reduction, efficiency and environmental impact.
Great interest also for electric mobility. Skoda Car recently started the experimental production of a fleet of ten E-line Octavia Green cars. The first fully electric car developed by the Czech firm which – during the exhibition – organized an interesting conference on the prospects of this new kind of mobility.
Within the same area of activity and connection between research and practical applications, a special mention goes to the students from Brno university of technology for developing an electric car on the chassis of a Skoda Superb, that has passed its type-test and is able to reach a top speed of 170km/h, with a range of 220 km and takes just half an hour to be fully charge.
Shifting away from the argument of electric mobility, but as further evidence to support the claim that Czech people love engines, (with their resourcefulness and ingenuity), there is the super motorbike Midalu, built almost craftsman-like by FGR from Usti nad Orlicí. With its 2,500 cc engine, capable of delivering 240 hp, it is considered the most powerful motorcycle in the world. Also in this case, great interest on the part of the public at the fair, including ours.

Msv an occasion for political debate 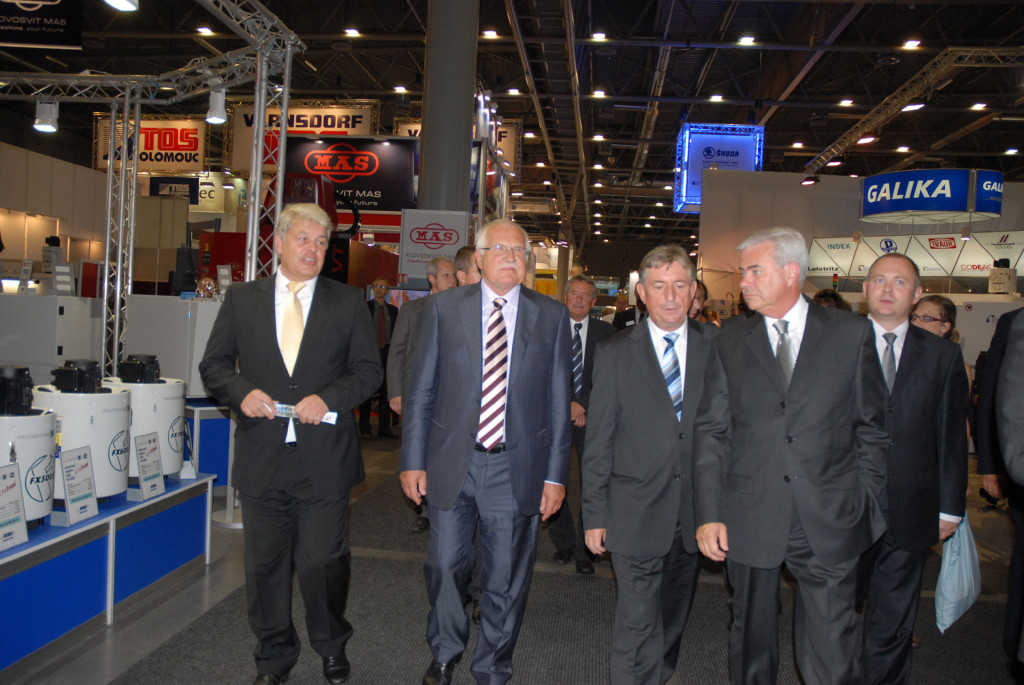 Even this year, as usual, great attention was given to the Brno fair by the political world. An obvious fact for an event that is now considered the major showcase of the national economy.
President Vaclav Klaus, who arrived on opening day, before speaking to the states general for industry, took the opportunity to repeat his Mantra on the single currency and the European Union. “We are not members of the Eurozone, but ours is an open economy and that is why we are watching with great concern what is happening in the eurozone. However, today’s problems had been widely foreseen for some time, because the euro was a wrong project since its inception”, he said, without failing to add: “The European single currency has always been a political project, without any economic justification. We Czechs have known it, since the time of the communist regime, that when politics imposes something on the economy, it is always a wrong.”
Not devoid of ideas was also the debate that took place between the traders, on the day in which the conservative prime minister, Petr Necas, spoke at the fair. He reiterated the Prague government’s commitment to carry out the established reforms and reduction of public expenditure. A reference was made to the consolidation of public spending, that was particularly appreciated by the group of industrial representatives, who reminded the Prime Minister, though, of the urgent need to improve the business environment, eliminate the bureaucratic barriers that still hamper business activities and to do something concrete in order to fight the scourge of corruption.
Czech operators also asked the prime minister for more concrete actions in support of research and development, without forgetting the urgent need to support vocational and technical schools – institutes that play a vital role in ensuring the availability of skilled workers that the industry needs.

Large Italian presence at Msv
Almost fifty, the number of exhibitors at MSAV 2011 who came from the Peninsula – to which we must add the numerous stands of companies that are Czech, but with Italian capital.
A presence that certainly did not go unnoticed – also for the grandeur of the exhibition area itself – was that of Marcegaglia, the Mantua Industrial Group, world leader in steel processing that took part at the Mechanical Engineering Fair in Brno for the first time. Among the big names, also Tajmac – leader of one of the major European groups, active in the field of metal working machines – which has its headquarters in Cinisello and its largest plant in Zlin in Moravia, or the Civest Group in Sesto San Giovanni and the Pro-Brixia (Branch Office of the Chamber of Commerce in Brescia).
Particularly impressive was also the large stand that grouped together in Brno, prestigious representatives from the Ligurian mechanical sector. The initiative was organized by Liguria International (Regional Company for the internationalization of enterprises) and Wtc Genoa (Special Company of the Genoa Chamber of Commerce), with the participation of the following companies: Eurocontrol, Homberger, Selex Elsag, Sima & Tectubi and Omba (Hofima group), Sorame, Tecnocasa Plants, Telerobot and TNI. The delegation was also made up of members from the mechanical department of the Genoa Manufacturers’ Association.
Peter Costa, the director of Wtc, pointed out that this participation was the result of an agreement signed last May between Wtc Genoa and Czech Invest – agency of the Ministry of Industry and Trade of the Czech Republic.
Another fine promoter of the Ligurian stand was Franco Aprile, President of Liguria International and Honorary Consul of the Czech Republic in Genoa. “Our participation at MSV stems not only from an awareness of the international importance of the event, but also for having already developed – in the Czech Republic – various business activities between our enterprises and local ones. We were impressed not only by the vastness of the exhibition area and the high number of exhibition halls, but above all, by the quality and innovation processes presented. Also quite striking was the strong presence of China and other major nations – which goes to show that with Globalisation, it is now fundamental to be present on the market in an increasingly specialized way. I am satisfied because we have triggered all the synergies in order to be an important window of the Czech Republic in northwest Italy”.