The mid-April visit by the President of the Italian Senate, amid top-level institutional meetings and a bit of relaxation to discover the Golden City

His participation at a major international conference on the fight against corruption and to celebrate the tenth anniversary of the Czech Republic in the EU, including a prestigious appointment at the Embassy in the name of art and culture. These were the important stages of the four-day visit to the Czech capital in mid-April by the President of the Italian Senate, Pietro Grasso. “Not to mention – as he himself pointed out – the desire to see this wonderful city, that I have visited before, but always for work reasons and in a hurry, without enough time to see it properly”. A desire that he has been able to achieve this time. The President and his wife Maria, in fact, spent a few relaxing hours visiting the Golden City and its surroundings. 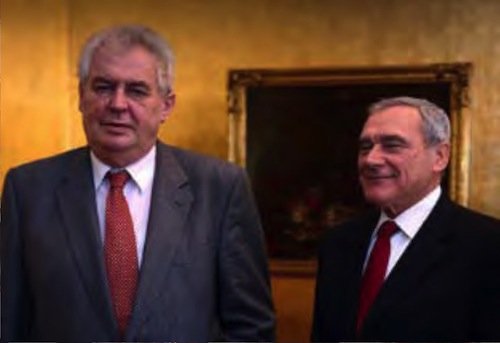 The institutional program started, from the very first day, with a visit to the Castle, the presidential seat, where Mr. Grasso went to see the head of state Miloš Zeman. A very cordial meeting, which was followed by another meeting at the Valdštejnský palác with Milan Štěch, President of the Czech Republic senate. Mr. Grasso then went to the Augustine Hotel, where he spoke at the international conference “World Forum on governance”, organized by the Brookings Institution on the subject of corruption and effective governance practices to combat it. On this occasion, the former magistrate – who held the position of national anti-Mafia prosecutor from 2005 to 2012 – highlighted the fact that the criminal phenomenon is now becoming increasingly transnational, and defeating it requires a new strategic approach that is less tied to the principle of sovereignty of States and more focused on co-operation at European and international level.

On the following day, Friday 11th April, another visit to the Prague Castle to attend the Inaugural Session of the commemorative Conference for the tenth anniversary of the Czech Republic’s accession to the EU and the occasion for a meeting with Martin Schulz, President of the European Parliament, for an exchange of opinions in view of the European elections at the end of May.

An elegant reception in his honour was organized in the evening by the Italian Embassy, which was attended by high-ranking personalities, including Cardinal Dominik Duka from Prague and the former Czech president Václav Klaus. Among the guests also the former Italian Prime Minister Mario Monti, who was also in Prague to celebrate the tenth anniversary of the Czech Republic as a member of the EU. The host was Ambassador Pasquale D’Avino, who reminded guests that Mr. Grasso is “not only the President of the Italian Senate, but also a symbol of hope because of his commitment against corruption and the mafia”. The occasion was an opportunity to exhibit a few paintings by Tiziano, a prestigious preview of the “Tiziano Vanitas, shades of renaissance beauty” exhibition that will take place in the Imperial Stables of the Prague Castle in 2015. Works of art owned by the Centro Studi Tiziano & Cadore Foundation.

Finally, a moment of rest on Saturday, during which President Grasso allowed himself a tour of the City. Inspired also by his wife Maria – a keen supporter of the Palermo football team – they spent the afternoon watching the match for the highly anticipated derby between Trapani and Rosanero. Just like other supporters, the President and his wife followed the match at the Pizzeria Rugantino II in the centre of Prague, rejoicing at the end over Palermo’s victory.