Prague and disarmament: theatre or stage

Obama and Medvedev have signed, in the Czech capital, the Treaty on strategic arms reduction. For some politicians it represents a setback to the role of the Country in Us foreign policy.

The American president intended to reassure the leaders of the Central European Countries, after the decision to give up the antimissile shield project

Prague at the centre of United States foreign policy. It was so during the time of the cold war and still is, but in many different ways. To cause this dramatic changeover from the centre of USA interests in Central Eastern Europe – in opposition to Russia – to a privileged stage of expected announcements and of global relevance, was USA president Barack Obama who, from 5th April of last year to 8th April 2010, traced an imaginary parabola that has redesigned the Czech role, according to American strategic interests. From the promise of a world without nuclear arms to the signing of the new Start Treaty with Russia, for the reduction of theatre strategic arms, among all the atomic war-heads
A change of role and position which was to some, such as president Vaclav Klaus, host of the ceremony between Obama and Medvedev, to their liking: “This signature is more important than we expected – declared the Czech head of state – “an extraordinary moment which has strengthened our ties with Washington”. But many have turned up their nose in seeing Prague being transformed from a “border” city of contraposition between Russia and the USA, into a neutral place in which to sign an important treaty as the Start II Treaty. And, if Obama wanted to reassure the leaders of the region, in first place the Poles and Czechs, disappointed upon the renunciation by the United States of the anti-missile shield project in Central Eastern Europe, there were some who expressed quite clearly their negative opinion. Among them, the ex foreign minister, Karel Schwarzenberg, the aristocrat, now head of the Top09 conservative party, who had signed the Treaties for the US radar installation on Czech territory – who gave up going to the dinner offered by Klaus at the Prague Castle, following the Start II Treaty, because “it’s a waste of time”, he explained without hiding his annoyance “I prefer to spend time on the electoral campaign. They ask us to take part at the dinner as guests, but our role there, is no higher than that of the waiters”. 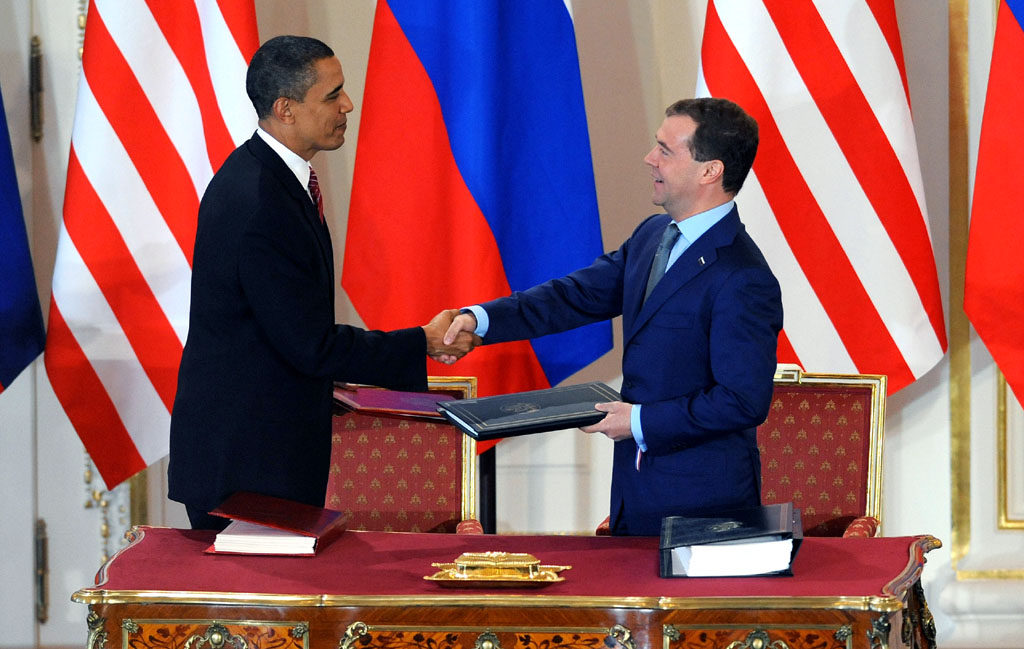 A bitter truth or just nostalgia of what used to be? Perhaps much more. It was significant, in fact, that at the ceremony in the Spanish Hall of the Prague Castle, there were no well known personalities and symbol of the second postwar alliance between the United States and the Czech Republic: Vaclav Havel. The ex president, leader of the Velvet Revolution seems not to have been invited. Havel, whom Obama had wanted to meet during his first visit to the Czech Republic – even at the cost of putting off his departure – was not present during the signature of the Treaty – that has been defined by all as historical. According to rumors, the exclusion was the direct consequence of the “reprimand” and “rebellion” contained in the published letter which was also signed, among others, by Havel and Lech Walesa, in which they expressed concern over the new American approach to Russia.
Politicians and leaders of the ex Warsaw Pact had asked Obama on that occasion not to sacrifice the interests of the region only to improve relations with Moscow. A legitimate request, perhaps, after the leader of the White House had wiped out in one go, with just a simple phone call to Czech prime minister Jan Fischer, years of diplomatic work for the realization of the US shield between the Czech Republic and Poland. An anxiety with perhaps a retrospective connotation, but which also found support from Lubos Dobrovsky, ex Charta77 and Czech ambassador in Moscow and close to Havel: the ex defence minister believes that the Russians have interpreted the Start II as a sign of US weakness.
To confirm this vision is the unilateral declaration by Moscow in which they underline that Russia may pull out, at any moment, from the Treaty “should the increase in quantity and quality of the USA strategic antimissile defence potential start to have a consistent influence on the efficacy of the Russian nuclear strategic forces”. A version that implies, rather openly, that if the shield project, also in its new “diffused” version with a strategic centre in Romania, should take place, exit from the Start treaty will be immediate with all the conseguences.
What is the use of Obama’s promise then to the 11 leaders of the Central-Eastern Countries gathered in Prague that the resumption of relations with Moscow will not be to their detriment? According to the Czech leader, the states of the region have asked that the Usa-Russian relations should respect the interests of the area and that they should be made transparent. A diplomatic way of asking not to become involved and used as a pawn. The strategic dinner at the US ambassador’s residence, therefore, has afforded greater assurance to Bucharest and to its president Traian Basescu, who was the last to arrive, but received by Obama before the Czech leaders. Nevertheless, Prague comes out a little battered, at least in its pride.