Prague and Vienna: separated at home

high standing commercial partners, but divided by the nuclear spectre 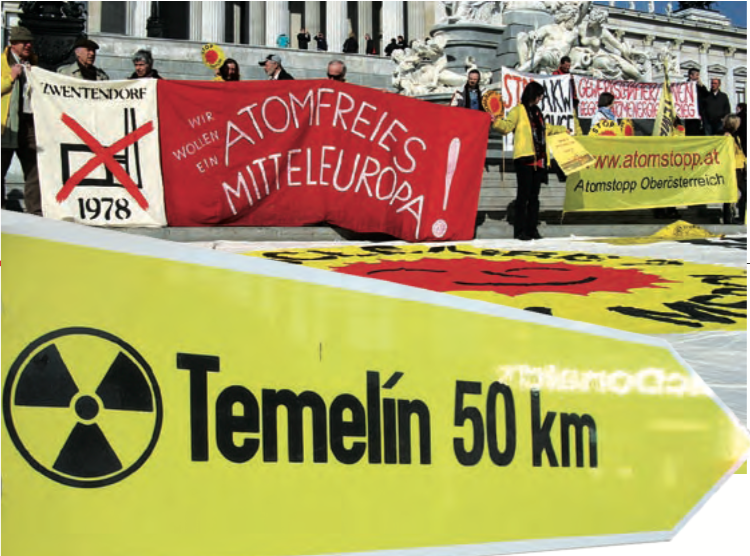 They are not fierce enemies, nor brothers separated at birth, as Prague and nearby Bratislava, nor are they reliable trading partners, as Prague and Berlin are. Better still, they are distant cousins, a bit snobbish towards each other (rightly or wrongly) and with a diffused underlying aversion, that during centuries-old relations have their mark.
This is how things stand between Austria and the Czech Republic today, but despite this, relations between the two neighbours are not cold and distant, as demonstrated by trade statistics and the presence of Austrian banks and enterprises on Czech territory. However, over the years, there have been reasons for conflict and animosity. One of them – which came up several times and is still alive – is the issue on nuclear power, which sees Vienna contrasting the Czech Republic’s aim to double the power capacity of the Temelin nuclear station in southern Bohemia.

An issue, that of atomic energy, which is causing concern to the Austrians in two ways: on the one hand, the environmentalists and the government who are asking the Czech Republic not to build new reactors, especially after the Fukushima accident and on the other, Austria (which buys most of its electricity from Germany and the Czech Republic, which have nuclear power in their energy mix) and which might need to rely on this source of energy even further in the future to guarantee its imports.
In response to Austria’s verbal complaints, also at a European level, Prague has responded in no uncertain terms by stating that it will defend its plans for nuclear power expansion, as was confirmed by Alan Svoboda, one of the most influential managers of CEZ, the national Czech energy company. “We have to defend the principle of the Treaty of Lisbon that each country has the right to establish its energy mix and – at the same time – it has no right to interfere and tell other states how they should go about building their own.” Svoboda declared, referring to the two new reactors at Temelin and other units that Cez might decide to build at Dukovany.

One of the projects the Czech government foresees to put into effect is the construction of new nuclear power plants to guarantee 80% of nuclear energy needs by 2060, a plan which is not seen favourably by Austria, which is keeping a close eye on Temelin, just 50 km away from its borders, with the nightmare of a nuclear disaster and the failure to comply with the Melk Protocol (the Austro-Czech pact on nuclear safety standards signed in 2001). Prague, however, is ready to defend its position by fighting tooth and nail, also in view of the abandonment of nuclear power by Germany that could, in the coming years, guarantee Cez the role of leading supplier to Central Europe.
But Vienna is not giving in and is ready to use its entire “legal and political” means, to prevent the realization of the nuclear development programs that have been announced by the Prague government. The Foreign Minister in Vienna, Michael Spindelegger, declared in the last few months that: “The Czech Republic is a country that has not learnt anything from the Fukushima disaster in Japan.” He then added that there had also been ill-feelings during the visit of Prime Minister Petr Necas to Vienna in March. The prime minister had been received by anti-Temelin protesters and an Austrian Chancellor Werner Faymann, who – far from yielding on the issue – is even ready for an offensive in Brussels. The controversy also has among its victims the Czech Foreign Minister Karel Schwarzenberg (who spent the years of exile in Austria during the regime): the Viennese daily Die Presse, commenting on the views expressed by the old aristocrat on the Temelin issue, including that of the Sudetes – another relational sore point: (“We will enlarge the nuclear plant and the Benes Decrees must not be touched”), wrote that Schwarzenberg transformed himself from a champion of rights into “a good Schweik soldier.”

Having said that, it all might seem like a picture of two separated people living in the same house. But in reality, relations between Austria and the Czech Republic conceal unexpected moments of brotherhood. In 2008, Schwarzenberg himself and Jiri Grusa, Czech ambassador in Vienna, had said that Austrian and Czech are two different languages, belonging to the “same nation”. Moreover, Austria is the third largest investor in the Czech Republic after Germany and Holland and that the two countries have been part of a single supranational entity for 400 years, the Austro-Hungarian Empire.

This last remark, however, could represent the fulcrum of resentment: Czechs and Austrians, just because they know each other so well, are like members of a family, who after having had an argument have not resumed their relationship. According to a few historians, in 1918, at the end of World War I, the Czechs took away the most industrially developed part of the empire from the Austrians: in Bohemia and Silesia they used to extract 90.6% of black coal and 83.1% of brown coal of the whole Empire. But, another Czech region, South Moravia, has been remained in some way an integral part of Austrian history and even gave birth to important Viennese historical figures: Adolf Scharf, president of the First Austrian Republic from 1957 to 1965 and Karl Renner before him. With this faceted overview in mind, to rediscover the real connection between Prague and Vienna, it is perhaps necessary to look deeper into the welcoming relations of the respective dissidents in times of crisis (during Nazism and Communism) or to cultural and tourist aspects – that have always been very intense between the two countries, rather than considering the existing divergences that are present and will always be, in that typical love-hate relationship that ties and will continue to bind the two countries together for many years to come.