When Trieste was the Czech window in the world

A brief history of the relations between Czech lands and the Adriatic coast: from the joy of the 19th century, to the darkness of the 20th century

Just to be able to return, Professor Karel Žlábek devised a 400 km long tunnel. It was 1967 and the Prague economist, with Mediterranean dreams, studied the route: from České Budějovice going underground before Linz, coming out in Koper, Slovenia, and continuing on tracks until the artificial island of Adriaport (to be built for occasion). Hard to believe, but a decade afterwards the Czechoslovak Communist Party took the project seriously, which involved reaching the Adriatic without having to cross any border, not a small problem for those times. The project would consist of thirty years of work, between 1991 and 2020, but history put it back in its drawer.

Reaching the sea, or better, returning to the sea. Indeed, because for Czechs the Adriatic coast was certainly not unknown. In fact, there had been a time when it was “their” sea. And their port was Trieste. 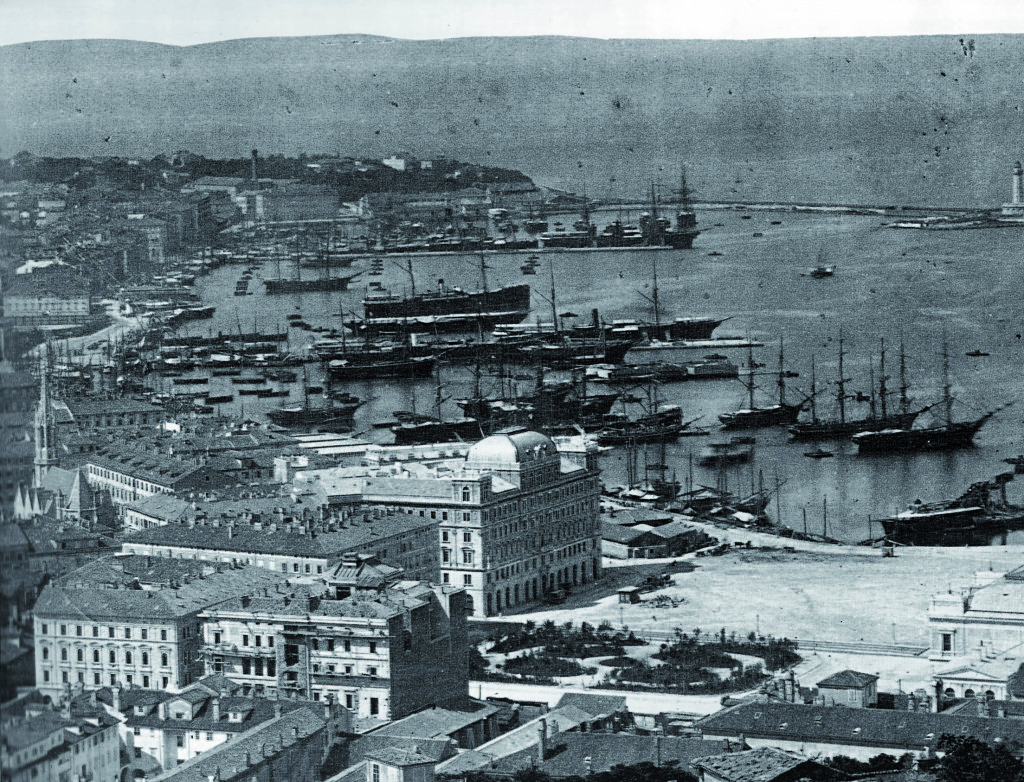 In 1719, the Emperor Charles VI, King of Germany, Spain, Hungary, Bohemia, Dalmatia, Croatia, Slavonia, Servia and more, in a few words at the head of that Austria that ran from Prague to Istria, made Trieste a free port. At the time the city was little more than a village, with 3,000 inhabitants, and the decision to make it the main maritime outlet for Vienna would have given rise to an unthinkable development for that coastline in the shadow of the great Venice. For the first decades, however, the port and its trade had an important but not explosive growth, with the city still reaching 50,000 inhabitants at the end of the 18th century. However, it was the 19 century that provided the change of pace. The 19 century meant industrialization, and industry, for the Empire, it meant above all the forges of northern Bohemia, or the textile factories of Brno, defined at the time as the Manchester of the Hapsburg monarchy. In 1840, Brno had 10,000 workers out of 45,000 inhabitants, and it is interesting to note that Prague, on the other hand, had grown much slower, with about 5,000 workers per 100,000 inhabitants in the same years. The opening of the Vienna-Olomouc-Prague railway in 1845 accelerated the industrialization of the capital, with new factories in the districts of Libeň, Smíchov and Karlín.

In the meantime, 500 kilometres to the South, the Imperial Regia Privilegiata Compagnia di Assicurazioni Generali Austro-Italiche was founded (in 1831), the insurance agency destined to become a symbol and pride of Trieste inside and outside the borders of the Empire, and shortly thereafter it opened its headquarters, in Piazza Grande, the Österreichischer Lloyd (in 1836), one of the oldest shipping companies in the world. The growth quickly revolutionized the city’s daily rhythm (by the middle of the century the number of inhabitants was already 130,000) and in 1863 the government banned the competition for the construction of the new commercial port.

So Trieste and Prague gave birth to a harmonious development: on one side the Ore Mountains filled the coal furnaces, on the other was the construction of the Sudbahn railway, which connected Vienna to the Adriatic and from there, wherever you wanted to arrive. It was the time of the opening of the Suez Canal, of the absolute domination of Old Europe on world trade, of the locomotive and intercontinental journeys. In a dance beyond the Habsburg crown, the happiness of the Czech lands depended on the Adriatic coast, and vice versa. So much so that the contacts between the two communities did not take long to be sealed by friendship: “Nevím proč, ale jisto je, že jsem za dvojího svého pobytu v Terstu byl hned po několika minutách jako doma”, said the Czech poet Jan Neruda, “I do not know why, but it is certain that on my second visit to Trieste, in a few minutes I already felt at home”.

The life and influence of the Czechs in Trieste, as well as the Slovaks in Rijeka, considered the port of the Hungarian part of the Doppelmonarchie, has been described with great care by a Trieste-based researcher, Borut Klabjan, who in 2008 published the text “Ceškolovaška na Jadranu – Czechoslovakia in the Adriatic”. Through this we discover the diverse Czech community that appeared on the coast in the second half of the 19th century. There was a middle class made up of clerks and bank managers of Živnostenská banka (whose “new” seat of 1914 can still be seen, on the corner of Via Roma and Via Mazzini, now hosting premises of the Deutsche Bank) or Česká spořitelna (Böhmische Sparkasse), Sudbahn employees and engineers, or the proud technicians of Breitfeld & Daněk, who arrived from Karlín to build the machinery of the prestigious hydrodynamic center of the port. In addition, there was also a popular class that appeared as less prominent in the eyes of the press, but which was also fundamental, made up of workers, laborers, apprentices, messengers, waiters, prostitutes. In 1890 in Trieste there were about 1,304 Czechs and 382 Moravians, and in 1910, 1,445 Czechs and 704 Moravians (the city had now reached 230,000 inhabitants). While in Prague the young employee of Assicurazioni Generali, Franz Kafka, made a note of needing to study Italian in the event that he would need to move to the central office, in Trieste the Czech association, Česká beseda, gathered compatriots and together Slovaks, Croats, Slovenes, for events and associations organized at Narodni Dom, the center of the Slavic world of Trieste (today the seat of the School of Interpreters and Translators of the University of Trieste). They were the last years of the Empire and shortly thereafter, with the Great War, the friendship between the two lands took a different turn.

The relations between Italy and the First Czechoslovak Republic went through alternating phases, although all in all positive, until the 1930s. Also because during the war Italy had supported the independence intentions of Tomáš Masaryk and Milan Rastislav Štefánik, and Trieste itself had been the landing place of over 50,000 Czechoslovak soldiers who had fought with the Russians against Austria-Hungary, and that then they had to cross Siberia and set sail towards Vladivostok to return to Europe. Natural therefore, that the consulate general of Czechoslovakia in Italy in the post-war era was in Trieste. But the new freedom for both peoples, the return to “reference” nations, did not always play in favor of fraternal sentiments. So a fascist raid on July 13, 1920, even before the march on Rome, destroyed the residues of that multiculturalism in Trieste in which the Czechs had played a major role: the Narodni Dom, also known as Hotel Balkan, was set on fire. The advent of fascism in Italy widened the distance between Prague and Rome, providing a new reason for Masaryk and Beneš to favor French diplomacy. However, despite the substantial differences between a democratic and multinational regime, and an authoritarian and nationalist one, the two countries tried to maintain intertwined relations in the past. And then the Czech industry was eager to keep alive the relationship with the Julian port, of course, in the absence of better offers. On 1 January 1925 the German Reichsbahn introduced advantageous railway tariffs for Czechoslovakia to reach the ports of Bremen and Hamburg, making them much cheaper than Trieste or Rijeka. Thus began a curious war of duties between Germany in economic recovery and Italy, a series of proposals and downward counter-proposals on railway and maritime tariffs that led to the Fiume Conference in 1926, in which the Adriatic and the North Sea shared “the countries of Central Europe without access to the sea. Czechoslovakia was divided into different zones: the Bohemian industry was destined to travel to the north, while Moravia (together with Austria) was part of Trieste’s jurisdiction.

The advent of Nazism, a friend of fascist Italy as it was an enemy of Czechoslovakia, further distanced the Adriatic coast from its old role as a Czech window over the world. The war and, perhaps even more, the post-war period,clash regarding the Trieste symbol of the division of Europe into two opposing worlds, marked the closure of those privileged relations. Neruda’s “second home” was gone. For forty years, communist Czechoslovakia could only dream of digging under the walls and under the debris of history, to re-embrace the Adriatic as its own sea.

The Czech Republic and Trieste then found themselves in the new Europe, with oil and gas pipelines connecting them today, and eight trains a day only to Ostrava from the Trieste Marine Terminal, new businesses, new life, a new well-being, a new starring role for the Julian port, but this is another story… 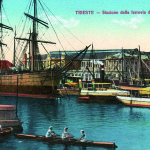 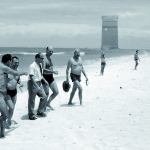 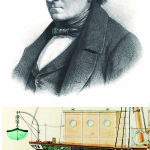 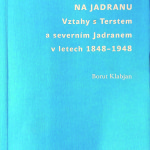