That century old swaying friendship between Rome and Prague

Although the first relations and exchanges in various areas between Italy and the Czech lands go back to the distant centuries of the Middle Ages and the Renaissance, it is only in 1919, after the birth of Czechoslovakia that an important period for the political-diplomatic relations began between the two nations. Celebrated precisely this year, the centenary of these relations represents a very important milestone, especially in the light of what the “Short Century” – as defined by the historian Eric Hobsbawm – meant for Europe and the world likewise, from the dawn of the Great War to the fall of the Berlin Wall.

On January 28, 1919, the forty-years old Italian diplomat, Mario Lago, arrived in Prague, as acting chargé d’affaires. He was received with all honors by the political authorities of the new nation, among the ovations of the crowd cheering for Italy.

Lago remained in the capital only until the beginning of 1920, but his contribution was fundamental for the consolidation of the network of diplomatic relations between the two countries. The archive documents report that in January that year, Lago immediately had an interview with the President of the Republic, Tomáš Garrigue Masaryk. The latter took the opportunity to express sentiments of profound admiration and gratitude towards Italy for all it had done for his Country during the Great War, and even after the conflict, referring mainly to the Czechoslovak Legionaries in Italy who, trained and equipped in the Peninsula, formed the basis of the new Czechoslovak army once they returned to their homeland. Masaryk defined himself as “Italophile” to such an extent – as himself stated – that sometimes his countrymen criticized him for it. Fellow citizens that, as we will see, looked more elsewhere than towards the Tiber.

Despite the declared “Italophilia” of Masayk and of most of the Czechoslovak people, the Italian diplomatic mission arrived in Prague at a time when the relations where very delicate, as Czechoslovakia – despite the efforts made by Italy – was approaching more and more, both politically and militarily, another ally: France. 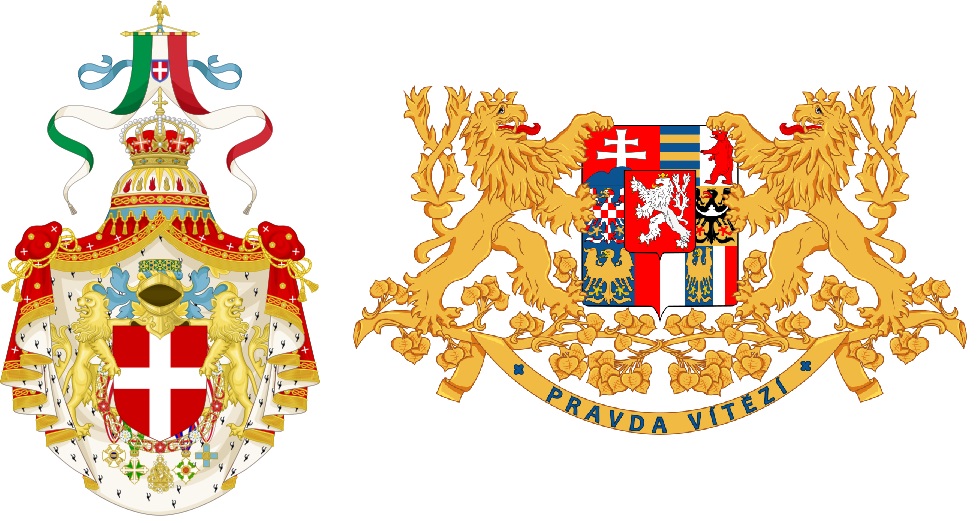 The military relations between Rome and Prague have been particularly intense over the second and third decades of the twentieth century. Representatives of the Italian government were often found on a mission in the Slavic territories to verify the conditions of the Czechoslovak army and were very interested above all in the activity of Škoda factory engaged in the weaponry production. Even though Italy was the first nation to recognize Czechoslovakia and armed and supplied a full army for its defense, it soon found itself dealing with the Czech Realpolitik which – as the scholar Fabiano Gritti of the University of Nitra has well depicted in his article “The end of the Italian military mission in Czechoslovakia in 1919 in the light of Italian archive documents” – in reality was operating to remove the Italian influence and presence on the territory, favoring a greater participation of the Parisian government.

In this difficult context, on January 4, 1920, the plenipotentiary minister Antonio Chiaramonte Bordonaro arrived in Prague, as an Italian representative and acting ambassador. Bordonaro’s name is connected to a curious story concerning the removal from Malostranské náměstí of the statue of Feldmarschall Josef Radetzky, proud enemy of the Italian independence and responsible of the Milan bombing in 1848 during the Risorgimento. In a story that has not been completely clarified still today, it seems that in 1921, the statue was removed from Malostranské náměstí following the protests of the Italian Embassy in Prague, then led by Bordonaro.

He remained in Nerudova headquarters until 1924, and was among the main characters of these first years of crucial diplomatic relations for the two countries, both found in particularly delicate political situations. If, on one side, the newly born Czechoslovakia was going through an adjustment phase, especially concerning foreign policy, Italy was at the beginning of a twenty-year period that would know the dawn, rise and fall of Fascism.

As shown yet again by diplomatic documents, a certain disturbance on the side of the young Czechoslovak democracy government appears on the occasion of the March on Rome. Following these events, in a private letter sent to the government’s representatives in October 1922, Edvard Beneš, then Foreign Minister, showed himself as highly concerned about what was happening in Italy, and mostly about the change in the country’s government. At the same time, the public opinion and the Praguian political circles expressed a certain concern about the fear of a rupture, for territorial reasons, between Italy and Yugoslavia. This was as a consequence of the rise of Fascism, seen as a potential cause of war between the two countries in which Czechoslovakia would have necessarily been involved. In fact, we shouldn’t forget that Prague established a system of alliances with the Kingdom of Romania and Yugoslavia itself since 1920: the Little Entente, whose main purpose was the defense against the Hungarian irredentism and the prevention of Hapsburg restoration in Europe.

It’s interesting to note that in those early twenties, the fear of a possible alliance between Italy and Germany was already growing in certain political circles in Prague, whose strong nationalism had been a reason of concern starting Czechoslovakia’s early days. Nevertheless, we must say that regardless of an occasionally decreased transparency of suspicions and political maneuvers, the efforts of the Czechoslovak politicians were all aimed at effectively strengthening relations with Italy. Beneš himself was committed to improving trade treaties to facilitate imports mainly leveraging the port of Trieste, a vital hub for the traffic with central Europe.

The year 1922 marked also a milestone for the Italian-Czech friendship and relations, due to the establishment of what is today the Italian Cultural Institute in Prague, created in June that year, under the name of “The Italian Institute of Culture”, based in Prague 2, at 26, Ječná Street. This institution was promoted by the activity of Italian intellectuals living in the area, among which Giani Stuparich, who was the first lecturer of Italian language and literature at Charles University between 1921-1922. It aimed at “spreading and deepening the Italian culture knowledge in Czechoslovakia and organizing mutual intellectual and artistic relations using all means suitable for this purpose” (Art. 3, Articles of Association). The Institute was officially inaugurated on March 2, 1923 in the presence of the ambassador Chiaromonte Bordonaro and Minister Beneš. The President of the Republic himself, T.G. Masaryk, contributed with a donation of 5,000 crowns to the creation of the institute. Still in 1923, Beneš set out on a journey to Rome where he discussed with Mussolini on the Hungarian matter and the economic relations between Italy and Czechoslovakia. But, the outcome of the meeting didn’t live up to the expectations. As stated in the diplomatic documents of that time, we also learn about the position of the Czechoslovak press towards Fascism, specifically following the Matteotti murder: either a condemning attitude or a blander one, depending on the evolution of the political situation and the bilateral relations.

However, despite an attitude of occasional mistrust, especially on the Italian side, fueled by fear, and actually a grounded one, that both Masaryk and Beneš were partly yielding to the French ally’s pressures and flattery who had many and important interests in Central Europe, we must positively evaluate the relations between Italy and Czechoslovakia in that period. In addition to the cultural side, the friendship between the two countries produced abundant results in the commercial relationships strengthened especially in the second part of the 1920s. Rome and Prague have always shown the will to maintain good and profitable relations that, despite some moments of crisis during the complex history of the XX century, are still lasting and stable, today more than ever.