Two twins grown up together through adolescence who, side by side, learnt to walk and then separated during the most important part of their maturity and adulthood. A metaphor which could well represent the relationship between the Czechs and the Slovaks, two populations who were for a long time united as a single nation and then changed into the Czech Republic and Slovakia. The life of two brothers, often denominated as the older brother (Prague) and the younger one (Bratislava), along a single path which, at a certain point, splits into two: one to the left and one to the right, someone might add. And if the diversity is real for certain aspects in the life of the Czechs and Slovaks, we cannot say the same for other aspects of the relationship between the two Countries, especially between the two populations.

It is now a little over twenty years since the Velvet Revolution took place, denominated “Sweet ” by the Slovaks, which marked the birth of a post-communist government in Czechoslovakia. By 2013, many others will have passed since the separation of the two entities. A bloodless division which, from January 1st 1993, has given rise to two separate nations, but which have always remained close together and a little nostalgic of the past, with a lot of things in common. First of all, admission to the supranational institutions such as Visegrad, then the path towards the European Union, achieved with great strides by Prague and followed by Bratislava. 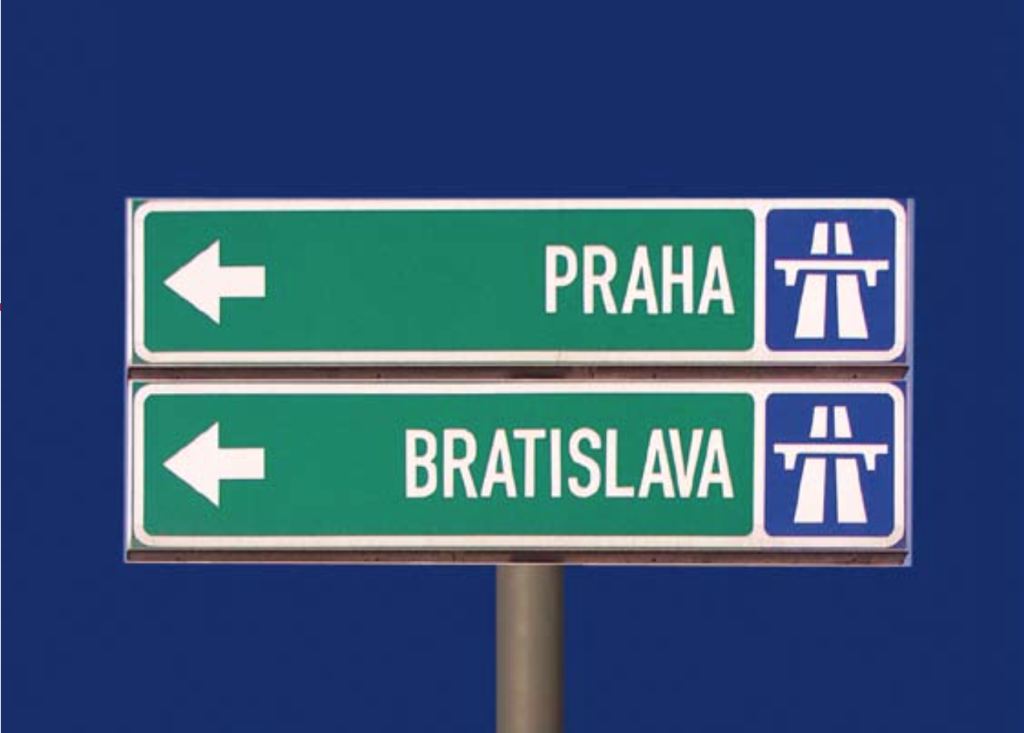 However, the Slovaks, recovered lost time and reached the Euro finishing-line first , becoming members of the Euro-zone club, the last step towards integration of the European family. A record achievement was the single-currency which, however, has not reduced the transfer of Slovaks to the Czech Republic: the Slovak community is, in fact, the largest minority on Czech territory (200 thousand people), due to work transfers, higher salaries, a perfect integration and better quality of life, due to the ratio between costs and standard of life
But, despite the fact that this large
community, mostly in Moravia Silesia and
Prague, is well integrated, relations
between the Czech Republic and Slovakia have not always been as relaxed and productive as they are today. A few facts: no reciprocal state visits between the two premiers from 1993 to 1997.
However, we must look beyond appearance: the lack of reciprocal visits has not affected bilateral relations, it is simply, as Petr Pithart, ex Czechoslovakian prime minister and then Czech professor has pointed out: that Czech-Slovak relations “are neither excellent nor bad; we have remained at point zero. We are not fighting, but we are also not walking arm in arm”. The problem, according to Pithart, is that the Czechs have always considered the Slovaks as “their younger brothers, who gradually have to learn from their older brothers”. Despite this premise, since the partition, over 100 agreements have been signed between the two Countries, that have involved the life as well as the economy of the Slovaks and Czechs. Last but not least, also the law which guarantees Slovak students the right to study in the Czech Republic without paying taxes.
Another point in common between Prague and Bratislava is the success , during the transition phase that both countries had to face, after the end of the communist regime, even if, as Vaclav Havel himself has admitted: “it was wrong to think that the change of mentality could arrive before ” many decades had passed. The heredity of the Soviet occupation, according to the ex Czechoslovakian president, involves both the present Czech and Slovak political class, both affected by the so called “normalization” process .

One of the differences, though, that characterizes the two countries, separated during the very difficult phase of “puberty”, is social stratification: more and deeper divisions in Slovakia where the growth of industries and liberalization policies, including entry into the EU, have caused an increase in the rift between rich and poor, between the perfectly integrated and European citizens and those who have remained emarginated.
One particular example is the Roma community which represents between 5 and 10% of the population, according to an estimate, but who live in dramatic conditions and in an environment characterized by racist incidents. A situation which has evolved despite strong economic growth and a reduction in unemployment that affected Slovakia from 2000 to 2005 (with an average of over 4.5%) and then with a peak of 10.4% in 2007.
During the last year, though, also because of the crisis, new ties have been established between the Czech Republic and Slovakia, a sort of nostalgia for the past – that was manifested through Television. From the separation, the two Countries have always tried to build up a distinct national identity, fruit of the federal inheritance of Czechoslovakia. In 2010, the desire to come closer for a comparison and exchange of ideas, has found a place for itself in the modern television agora: a few Czech and Slovak producers have joined forces, cut costs and reached a wider public with “Czech-Slovak superstar”, a reality talent show which has had enormous public success, giving rise to new Czech-Slovak television transmissions and TV shows, with a spirit of brotherly collaboration, by now, as cousins in search of new talents.