Saro Consentino in Prague between experimentation and a nomadic life

posted by Redazione March 11, 2021 Art and culture, Prague and surroundings

What do the “Trains of Tozeur”, interpreted by Alice and Franco Battiato, have in common with the “machine of love and death” staged in 1987 by the wrathful genius of the Polish theater, Tadeusz Kantor? How about the directors Angelo Orlando and Mimmo Calopresti with the singers Peter Gabriel and Ivano Fossati? And even more, what is the connection between the works “Genesis” and “Gilgamesh”, also by Battiato, and the television shows “Chip” by Piero Angela and “La difesa della razza” by Gad Lerner? The hand of an artist: Saro Cosentino.

Born in Rome in 1960, he is an eclectic composer, singer, producer, cinema and theater lover who took his first steps in acoustic and blues music, and then devoted himself to electronic and experimental music. “Even if the only world in which a musician can truly experiment nowadays is that of cinema, where you can transmit certain emotions even with unusual sounds. For a music director, composing is like living someone else’s dream and for this reason music shouldn’t be more important than the film”, confessed Saro Consentino, while enjoying a good coffee in a small bar in Vinohrady, not far from his home, on a warm and sunny autumn afternoon. “Otherwise there is the risk of producing a video”, he added while from the small TV hanging above, after an Enrique Iglesias video, we were overwhelmed by the fast-paced notes of “Born to Be Alive”, by Patrick Hernandez. And from here, all those numerous soundtracks for films and documentaries, the first one in 2006, after hearing so many times “you would be perfect for the cinema”. 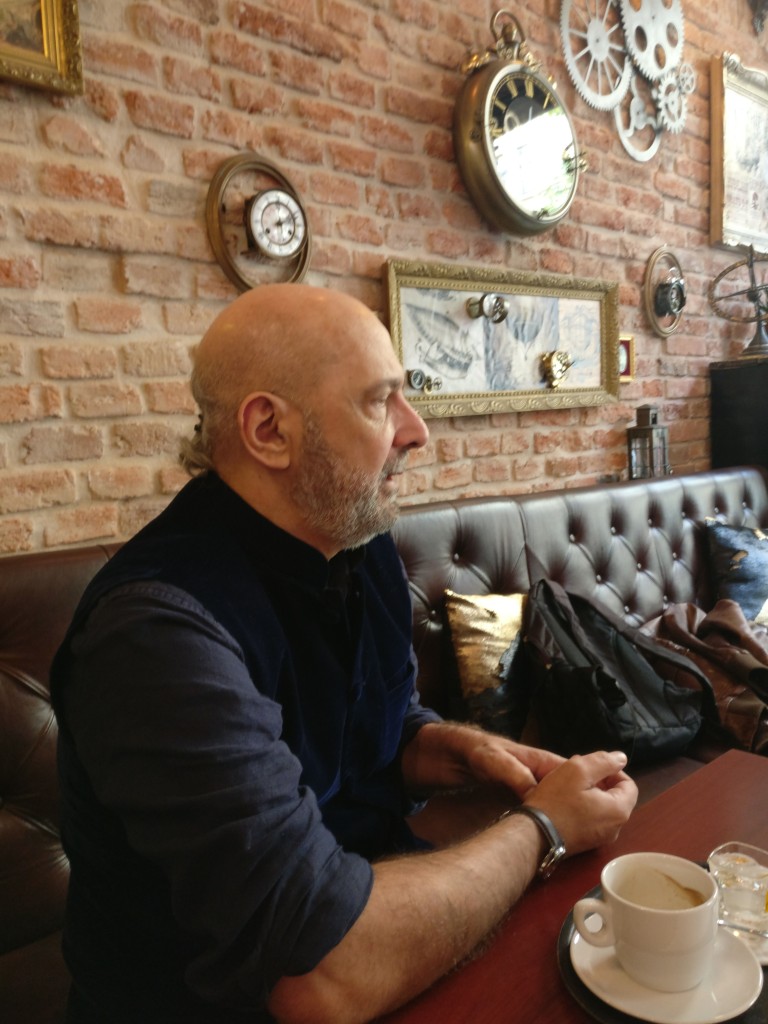 A nomad by calling and creative need, Saro worked and traveled in Europe and in the East, along the spiritual paths traced by the echoes of Sufi dancers and Buddhist pilgrims, before permanently moving to the United States and England. In the early 2000s, he returned to his home country, to a Milan where the record industry imploded into the repetitiveness of clichés. Just a little over forty, the artist finds himself at a crossroads: should he stay and try to satisfy the needs of the market, or restart and follow that inner and geographical South (but personal as well, considering that Saro’s father had Sicilian origins) celebrated by Battiato in “Giubbe rosse”? And Saro doesn’t hesitate. Despite the appeal of Istanbul and Turkey, he heads for Prague, following a polarity of his soul that pushes him on the footsteps of the maternal side of his family, originating from that peninsula of Istria on the border between Italy and Central Europe.

In the Czech Republic he found an extraordinary musical environment and musicians of the highest level to constantly and fruitfully collaborate and engage with. Among the many local authors by whom he loves to be “contaminated” is the folk-rock group Čechomor, “an interesting operation of revisiting the tradition produced by Jaz Coleman, founder of Killing Joke”. Briefly, this country is for Saro Consentino a favorable place for the creation of sound environments, where vibrations, exterior and interior, are free to interact with each other, generating harmonies. A precious and rich literary milieu consisting of sacred monsters such as Kafka, Čapek, Hašek, Kundera and Hrabal, authors able to read reality with disillusionment and irony, “one of the highest forms of intelligence”, and capturing its changing essences by subtraction, not by accumulation. Then, there is Prague, among the few urban realities able to grow and renew itself without cutting its own roots that branch off between history and legend, but remain faithful to a still intact and astonishing artistic heritage. In fact, after escaping the bombings and the devastation of the Second World War, “Prague is a beautiful city, with an incredible architecture, from baroque to art deco”, says Saro, also a passionate attentive and sensitive photographer. A colorful and elusive city that he loves to walk across in search of moments and sensations to capture with his lenses, and then rework the story in an Instagram profile with a discreet following. Not even the bureaucratic blindness and the grim uniformity imposed by the communist regime have defeated the lively spirit that animates this city, which regained its free expression after the Velvet Revolution. “But how much sadness was there at the end of the seventies. We were five friends on holiday, with long hair and wearing clothes that were fashionable back then, yet we felt the control, the induced suspiciousness. Even people’s posture was contracted, as if carrying the entire weight of the world on their shoulders. Nobody revealed anything, not even the young ones”, remembers Saro Cosentino who arrived in Prague with his friends on one of the most classic Volkswagen minibuses, before heading to Poland, during the years when a visa was required six months prior specifying exactly all the stages of the itinerary.

Such distinct contrasts, between loose and yet tight extremes, were never a strange thing for Saro Cosentino. Coming from a Catholic family, he takes pleasure and feels the need to respond to a vocation of experimentation, not only musical but also spiritual. This is when he falls in love with India and oriental philosophies, becomes fascinated by Sufism, interested in esotericism and curious about psychology, especially Jungian. After long and stimulating travels, the time comes to lose the unnecessary weight and concentrate on the substance of things. “As we age, we feel a more acute sense of decline that pushes us to think about the most essential things, it’s the time of subtraction rather than the accumulation one from our youth”.

However, the connection with Italy remains strong, also due to that bridge between people and cultures represented by the interest in sports, football and cycling in particular. An avid fan, Saro immediately clarifies the unanswered questions, the bedazzlement of those who see the names of San Giovanni della Croce and Silvano del Monte Athos matched to the Roma Sporting Club and to a corner of Prague where the Giallorossi supporters meet. “The spiritual path is not in contrast with the football passion. Sharing the inner experiences, which is the basis of this searching path, always requires a comparison with the otherness and a subjective re-elaboration of lived experiences. In my case, the Sunday family rituals, when my father and I were getting ready to go to the stadium, waiting in the stands, cheering, having sudden outbursts of joy and sharing emotions, often with strangers, represent decisive moments in my becoming as a man”. Therefore, sports “is like a catharsis, a multiplier of emotions”. “Of course – he continues – there is always some idiot causing a sensation among tens of thousands of people, but look at the internet”. And now, for the first time during our pleasant conversation, Saro Cosentino gets sad, and seems to withdraw in himself. Already, the Internet and social media, the simplistic and belittling approach to reality, the dualistic simplification of the thought, the emotional regression, all the factors that disturb the relational aspects of search and inner growth. “Reality is complex and complex thinking is needed to embrace it”, while the trend is towards extreme trivialization and simplifying the polarization between pros and cons, a dangerous alibi that “exempts us from developing”. The result is the flattening of that fruitful and profound richness of life that Saro Cosentino has always tried to capture and represent with his music.