Home  »  Economy and Market   »   Škorpion, bursts of fire and mysteries

Škorpion, bursts of fire and mysteries

The historic submachine pistol, born in communist Czechoslovakia, is still a well known weapon all over the world for its deadly effectiveness

As lethal as the insect, whose name it bears, the Škorpion Vz. 61 submachine pistol has been and remains, along with the Kalashnikov, the emblem weapon of the world that was once entrenched behind the Iron Curtain.

It was, in fact, in Czechoslovakia in the late fifties – when the economy of the country was centralized and under state-controlled – that in Československá Zbrojovka, one of the country’s most important companies for the production of weapons, engineer Miroslav Rybář began to develop the so-called model 59. Two years later, in 1961, this prototype became the submachine pistol officially adopted by the security forces and the army of Czechoslovakia, with the name of Samopal Vz. 61.

The name Škorpion – which refers to the poisonous beasts and from which it gets its profile – was used later as a brand name, with which the weapon was exported. The submachine pistol proved to be so effective from the very beginning that it was sold in many markets around the world.

Its easy single-handed grip, or the possibility to hold it as a musket by using its folding butt – which, seen in profile, reminds us of the sting of a scorpion – makes it an extremely versatile weapon and explains why it became widespread in different areas of conflict.

The model, which is a mix between a semi-automatic pistol and a machine gun, has left its mark, which is often a bloody one, in the history of various countries.

It was used in Yugoslavia by the Serbs, Croats and Bosnians, and in different ways was employed in many regional wars in Central Africa. It is used today by the Indonesian special forces, as well as by the Afghanistan and Mongolian army.

With regard to its worldwide diffusion, we should note that a Škorpion model had also been produced under license in Yugoslavia and adopted by the local armed forces. The Škorpion that was produced in the Balkans differs from the original Czechoslovakian one for its black synthetic resin grip instead of beech wood.

The weapon of terrorism

Furthermore, the Škorpion was the most commonly used weapon of the national armed groups: from the IRA in Ireland to the Italian Red Brigades. With this particular model Aldo Moro’s police escort was killed in Fani street, on March 16, 1978, by a commando of Red Brigades, during the kidnapping of the Christian Democrat leader. And it was with the same type of Czechoslovakian submachine pistol that Moro was killed on May 9th of the same year, with ten shots, before being abandoned in the boot of a red Renault 4 car in Rome, in Caetani street. The story is still in many ways shrouded in mystery and many aspects of this intriguing story still have to be cleared up and constitute the main “episode” of the Italian years of lead. But it is the presence of the Škorpion that gave rise to the suspicion of a communist Czechoslovakian involvement during the Moro case period. 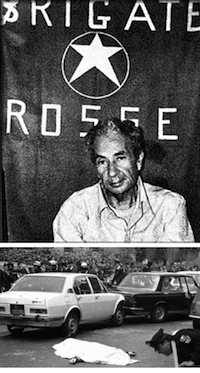 To such an extent that in 2010, the police of the Czech Republic officially opened an investigation into the so-called “Czechoslovak track”, with the hypothesis that behind the kidnapping and death of the Italian statesman there was probably the hand of the StB, the notorious secret police of the regime.

The case also involved the Úřad dokumentace a vyšetřování zločinů komunismu (The documentation and investigation office on communist crimes). Its task is precisely to deal with criminal offenses committed during the period of the regime – from 1948 until 1989, the year of the so-called Velvet Revolution – which are not pursued for political reasons.

To date, as we know, this Italian intrigue, which is worthy of a spy film, remains an unresolved case.

The name of the Škorpion is also linked to the memory of Gang de Roubaix – a French criminal gang linked to the terrorist group Al-Qaeda – which put France to fire and the sword in the nineties. Also in this case it was the bursts of fire from the Czech sub-machine pistol that were used for the soundtrack and for the criminal actions, with armoured assaults, murders, and close proximity to radical Islamism.

Despite the blood, the armed struggle and murderous gun-fire, the Škorpion is still famous in popular culture for another reason. In recent years it has been taken up as the arsenal of some of the most popular and best-selling video games in the world, from Call of Duty to Grand Theft Auto.

The continued success of the weapon – which is infallible with its semi-automatic short interval firing – is due to the continuous reliability and innovation of its Manufacturer: Česká Zbrojovka Uherský Brod, or Čzub, one of the biggest small calibre arms factories in the world.

The origins of this weapons manufacturer date back to the First Czechoslovak Republic. The plants started producing at full capacity in January 1937. The first to be produced were machine guns, pistols and small calibre rifles.

During the Nazi occupation of Czechoslovakia, production was reorganized on a military basis to supply the artillery troops. It was only in 1945, after the war, that the company started to differentiate production.

As mentioned previously, the Škorpion, called “the poisoned weapon”, started to be produced in the Moravian factory in 1961 and it is still the standard-bearer of the catalogue with a total production of more than 200 thousand copies.

The Česká Zbrojovka Uherský Brod does not only live on the “aura” of the Škorpion. Since the company was privatized in 1992, the development of more technologically advanced models has allowed the company to export to more than one hundred countries worldwide. The historical models have been renovated and accompanied by hunting and sport weapons. In 1997 the company also settled permanently overseas by founding the Cz-Usa company in the United States.

But even here at home its commercial success has not decreased: just a few months ago, the Czech weapon company signed a 1.2 billion crown contract with the Ministry of Defence. The contract is part of a plan to supply new weapons to the army, to be achieved by 2020. Five hundred of these, in fact, will consist of the legendary, lethal Škorpion.