Sursum, when art and the occult meet

A circle of painters and writers remembered as an important example of contact between official culture and mystical and esoteric thought, particularly in vogue in the Europe of the early twentieth century

At the turn of the 19th and 20th centuries, and mainly at the beginning of the last century, Central Europe experienced an extraordinary cultural epoque to say the least. The sense of deep restlessness that crossed the consciences and that would materialize shortly after the outbreak of the Great War with the consequent collapse of the Habsburg Empire found expression in the cultural production of the time, and it is still possible to perceive it and appreciate it in the musical, pictorial and literary works, fruit of the creativity and ingenuity of the best minds of the time.

Among the various artistic currents that developed in those years in the territory of the modern day Czech Republic, what deserves particular attention was what has been defined as “The second generation of symbolists”, which found its maximum expression in the work of the Sursum artistic association (Umělecké sdružení Sursum), which takes its name from the Latin motto “Sursum corda” (Lift up your hearts!).

Sursum was a circle of artists and writers active between 1910 and 1912, which despite not being able to earn major fame like other contemporary artistic expressions, is an important example of contact between official culture and mystical and esoteric thought, particularly in vogue in the Europe of the early twentieth century, which greatly influenced the artistic sphere and beyond. The association was founded on 30 July 1910 by the painter and critic Emil Pacovský (1879-1948), the painter and illustrator Jan Konůpek (1883-1950), the painter and graphic designer František Kobliha (1877-1962) and painter and writer Josef Váchal (1884-1969).

Some of these artists gravitated around Catholic periodicals and groups (hence “Sursum”, expression of use in the Latin mass) of Christian mystical inspiration, but above all they were frequenters of Masonic lodges, circles and cultural associations close to theosophy, magic and occultism in general, as is evident not only from the biographies, but also from the analysis of their artistic production. The idea of the foundation of Sursum, in fact, was born right around the Catholic-inspired magazine “Meditace” for which Emil Pacovský was a contributor.

The common feature of the members of the collective was the vision of art as a means of penetrating the secrets of the spirit and investigating the hidden face of nature; a living and magical nature resulting from a visionary and mystical conception of reality. “We love medieval spirituality, incunabula, the singular, the devil and God. Everything that is put aside today. We are intoxicated with the power of the future, with hidden knowledge, with mysticism, with faith [...]”, writes Váchal speaking of the soul of the Association. For both the philosophy and the themes dear to these artists, it is possible to compare Sursum to the Brotherhood of the Pre-Raphaelites, another artistic association, very influenced by esoteric thought, born in 1848 in Great Britain, close to symbolism and art nouveau and considered the pictorial transposition of late romanticism and decadentism.

The main purpose of Sursum was the “spiritualization of ideas and artistic forms”, as well as the development in its members, thanks to the artistic and spiritual research, of a super-consciousness and a state of being superior, typical of the symbolist approach that will also be found in artists of the years following the First World War, characterized by their fascination with hermeticism and the occult sciences. This trend will always find fertile ground in the culture of the new Czechoslovak nation. Sursum’s artistic poetics is placed as a search in the abysses of the human unconscious and in the supernatural dimension, and represents an attempt to investigate the secret laws that govern man and nature.

The first exhibition of Sursum was held in October 1910 in Brno, at the Club of friends of art. The catalog had 52 works including drawings, paintings and graphics. The exhibition was not a great success, but it did raise some controversy. The poster designed by Váchal, where a naked young man was shown emerging from the water and picking an apple from the Tree of Knowledge, was withdrawn by the police because it was considered contrary to public morals.

In November 1911, there was the first official foundation meeting of the Association. Other exponents of the Czech art of the time soon joined the original core of artists, such as the graphic designer Miroslav Sylla, the painters Rudolf Adámek, Adolf Gärtner and Jan Zrzavý, the latter probably the best-known artist of the group. The inclusion of these personalities brought new life and energy to Sursum which, on 22 September 1912, organized another exhibition, this time at the Prague Municipal House. The exhibition, which lasted for a month, was inaugurated by Emil Pacovský and this time 119 works by six artists were exhibited. In addition to Pacovský, Rudolf Adámek, Jan Konůpek, Miroslav Sylla, Jan Zrzavý, Josef Váchal were presented and, out of the catalog, also some works by the sculptor Jaroslav Horejc. The exhibition had a moderate success with the public, exceeding a thousand visitors and decreed the interest in this circle of symbolist artists, despite the critics who were not very generous with them, perhaps because of the overly marked interest in religion and mysticism in general. For example, the critic Štech reproached Sursum for a “formal, naive impotence and a certain “literary symbolism and mysticism”.

Despite, for better or worse, the event leading to much talk about the Association, this was also the last important exhibition of the collective which, in fact, had a very short life and broke up in 1912, after just two years of existence.

The official manifesto and program of Sursum was published only after September 1911 and the main author was Pacovský. In addition to the exhibitions, the program also included debates and other cultural events. This meant that, in addition to young artists, writers and other intellectuals such as the poets Rudolf Medek, Karel Šelepa and professor Miloš Maixner also joined the collective. The Association’s meetings were held every first Saturday of the month at the Café Louvre in Prague and the first president was František Kobliha. Despite attempts to form a strong group and an articulated program, Sursum was unable to withstand the attacks of critics and never found favorable conditions for it to develop further. Probably also because, just at that time, there was another artistic current that was imposing itself energetically on the attention of the public: Cubism which completely stood for the exact opposite of the mystical painters of Sursum, devoted to introspection and symbolism. Furthermore, Czech Cubism could be contextualized in relation to the European avant-garde, unlike Sursum which, in the international cultural sphere, remained almost completely isolated. After 1912 the individual artists took different paths. Jan Zrzavý gained some fame as an artist represented by modern Czech art. Váchal, Kobliha and Konůpek did not achieve significant success and, overall, they do not occupy a prominent place in the history of Czech art, like Pacovský and the others. In any case, the Sursum Artistic Association remains an important testimony, and a further example, of the creative and culturally dense climate that was born and developed over the years of profound and irreversible changes that Europe lived in the early twentieth century, in which it took life a culture that still today feeds on the spirit and roots of the new Europe. 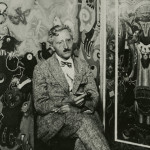