The great tradition of a company, which now produces trucks, but which in the past launched the first aerodynamic car in the world

From the carriages of the Austro-Hungarian Empire to the multi-million deal with India and the Middle East, the Tatra story spreads over three centuries. It began in 1850 when Ignác Šustala inaugurated a craft production of coaches and carriages at Kopřivnice, a small town in Eastern Moravia. Eight years later, the company that was to become Tatra in 1919, was founded as Schustala&Company.

In 1891, the name changed again and the Nesselsdorfer-Wagenbau-Fabriks Gesellschaft was founded, whose factories in 1897 started producing the first motor car in central Europe, called the Präsident. Presented in Vienna, this little gem of a car soon caught the interest of enthusiasts in the capital of the empire. Twenty years later, at the end of the First World War, the manufacturing company adopted the name that is reproduced on its car logo even today, inspired by the Tatra mountains on today’s border between Slovakia and Poland. The company, under the supervision of the Austrian engineer Hans Ledwinka, which began to specialize in luxury models and state of the art technology, launched the Tatra T77 in 1934, the first aerodynamic car model in the world. During those years, one of the most well-known enthusiasts of Tatra vehicles was Adolf Hitler. Being a car enthusiast, the German Führer travelled in different models made by the Czechoslovakian firm during his transfers around the country. And this passion will not be without consequences. From 1933 onwards, in fact, Hans Ledwinka met Ferdinand Porsche several times, founder of the homonymous car company and a member of the Nazi party, who admitted finding in Ledwinka’s drawings an important source of inspiration. 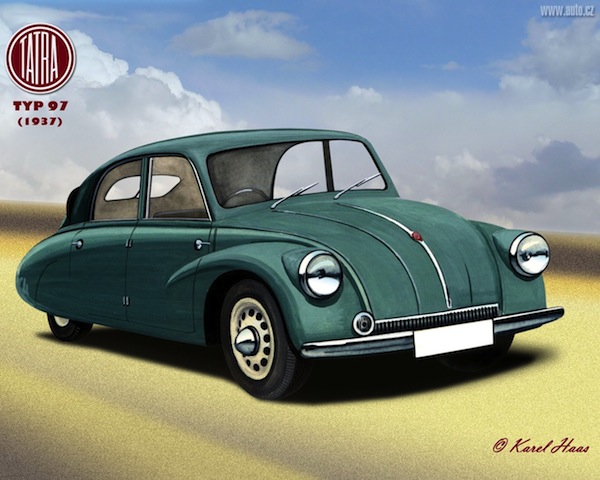 A glance at the 1936 Tatra T97 will undoubtedly show a close similarity with the Volkswagen Beetle – a company that was also founded by Porsche – whose first model was built in 1938. As a consequence, Tatra decided to file a lawsuit against Volkswagen, which never developed only because of the German invasion of Czechoslovakia. In addition, the Kopřivnice company was forced to stop production of the T97 model. The plagiarism by Volkswagen was brought up again several years after the end of World War II, when in 1961 the German production company as forced to pay a compensation of 3 million marks to the then state-owned Czechoslovakian company. During the communist dictatorship of the Country, which began in the aftermath of the war, the company was nationalized. As well as the production of historical models another final model was added, whose name was created to celebrate the new Communist planned economy: the T600 Tatraplan. The Mythical model of the Czechoslovakian company started production in 1948 and was sold in its cabriolet version to Joseph Stalin, to celebrate his 70th birthday.

Three years passed and the Czechoslovakian State granted Tatra permission to build new luxury models: this led to the production of the T603. Assembled almost entirely by hand, this model was very expensive and affordable only by few people: leaders of the Communist Party and presidents of state companies, or it was exported to other countries that were under Moscow’s influence: even the strongly communist Fidel Castro had one that was fitted with air conditioning. But in addition to luxury models, which the company continued to propose and renovate until the nineties, the bulk of production consisted of trucks for civilian or military use. Of these, the most important are the 1967 T813 model, the 1970 T148 model and the 1983 T815 one. The latter has a particular history that is very closely connected to that of Karel Loprais, the Czech rally driver from Ostrava, also known as Monsieur Dakar. Winner of six editions at the legendary Paris-Dakar race (in the truck category) at the wheel of a Tatra T815 4×4, Loprais began his career on the assembly line of the Kopřivnice firm in 1967. Having become a test driver, he spent most of his time testing these trucks until his debut in the rally world in1986. Since then he continued to run the Dakar race until 2002.

Today, Tatra has participated successfully in various sports competitions around the world, particularly with rally trucks, supporting and sponsoring various teams. Not so clear, however, are the internal issues involving the company. In recent years the company has paid dearly because of the international economic crisis: a significant staff reduction proved to be insufficient to solve the difficulties of the company, and despite the fact that more than a thousand employees were laid off, the years of negative budgets forced the company to be auctioned. Taken over in March 2013 by Truck Development, in the second semester of the year it recorded its first profit that amounted to 83.8 million crowns – the first after several years. Important orders for military vehicles arrived from the Middle East and India. The latter country, in particular, is one of the new markets in which the Kopřivnice company intends to develop its business.

Today, with a production that seems to be back on its track and that is excellent in terms of quality and economically sustainable, there is still an issue to be solved: the diplomatic-corporate-political case and legal battle, involving the former defense minister and ex deputy premier Martin Barták against the former U.S. ambassador in Prague, William Cabaniss, who was then head of the supervisory board of Tatra under the ownership of the American manager Rolan Adams. At stake there is a bribe of several million dollars that Barták is alleged to have asked Cabaniss, so as to ensure Tatra an important order of trucks for the Czech army. The request is alleged to have taken place during a diplomatic trip in 2008, when the former minister and then Prime Minister Topolánek were in Washington. The ongoing trial in Prague should bring about a solution to this “mystery” that causes people to talk a lot about the Tatra scam, but increasingly less of its legendary four (or more) wheeled vehicles.