The elections at “U Prezidentů”

Chronicle of a presidential voting day, from the most anti Zeman Prague pub

The new president of the Czech Republic loves pubs, but not all pubs love Miloš Zeman. In the Prague 6 district, there is one in which the level of aversion reaches record-high levels. It is located on a hill, in the most elegant district of Břevnov, just over a kilometre from the White Mountain. A quiet residential area, consisting of villas with gardens – about fifteen minutes downhill walk from the Castle. The place is called, needless to say, “U Prezidentů” (At the Presidents’) and in Prague – and on the day of the election for the new Head of State, there is actually nothing more appropriate than this place. 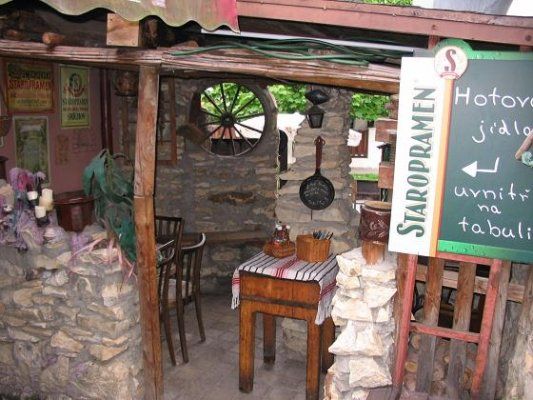 Around here, they are all for Karel Schwarzenberg, the aristocrat and elderly former Foreign Secretary, “because our dream is to see a prince at the castle”, say two women standing at the counter. Meanwhile, on TV they are about to start transmitting the results of the vote.

Hanging on the walls, is almost one hundred years of the Country’s history, through the portraits and images of all the tenants of the Prague Castle. An entire wall is dedicated to the father of the nation, Tomáš Garrigue Masaryk, immortalized in various poses: in an official photograph of that period and even while riding a thoroughbred. Together with Václav Havel, hero of the Velvet Revolution, Masaryk is certainly the most beloved president in this place.

In a corner, on a wall slightly at the back, there is an inscription: “Stůl komunistické bandy” (Table of the Communist gang ), and around the wall, the disquieting portraits of 40 years of communist dictatorship: Klement Gottwald, Antonín Zápotocký, Antonín Novotný, Ludvík Svoboda and Gustáv Husák.

“Here I would put the presidential photo of Zeman, because it is the Communists who elected him” mutters Josef, the landlord, in a foul mood.

Meanwhile, the polling stations have just closed and the first results start to flow on the TV. From the very first few minutes, the results are indisputably in favour of Zeman. Schwarzenberg lags behind by ten percentage points.

“What a pity, because we had the opportunity to elect a respectable person – and not this unreliable dinosaur from the past”” says Marek, a doctor from the nearby Motol hospital.

Then, thanks to the beer, that flows incessantly into the jars, the customers’ opinions gradually become more and more explicit – that if we were to report them all – we would also risk being accused of public defamation!

“It is a catastrophe. Zeman has won, thanks to an electoral campaign of calumny and cheap shots. Schwarzenberg acted properly by lowering himself that way. It would not have suited him”. The reference is to the aggressive and nationalistic tones chosen by Zeman’s team, especially in the last few days before the election. In first place, a fee–paying page, which appeared on a popular newspaper, the Blesk, published on the opening day of the vote, which described Schwarzenberg as a traitor and pro-German. All because, a few days before the vote, he had spoken in a particular way about the Beneš Decrees, “on the use of the principle of collective guilt – which nowadays would be considered as a crime against humanity”.

It was later reported that the individual responsible for organizing the anti Schwarzenberg notice on the Blesk newspaper, was a former member of the StB, the infamous communist police. The fact that Zeman’s entourage is made up of individuals, greatly involved with the past regime, is a further reason for criticism towards the new president – not to speak of his alleged affinity for the Kremlin interests in the Czech Republic.

At the Castle, a president that Prague does not love

At this point, from the TV we get a clear picture of the voting results at national level. The map is almost red in colour, indicating that Zeman has triumphed. A red colour consisting of different shades, according to the different regions, with vertices of intensity in those areas affected by higher economic depression, especially in the region of Ústí nad Labem (North Bohemia) and Ostrava, the historical stronghold of the left, where the nostalgic elements of the old regime are still the majority. On the electoral Map, just a few sparse portions of blue, the largest of which is in Prague, where Schwarzenberg received almost twice as many votes as his rival.

And there are also a few of them, who reflect on this aspect, in an attempt to try and give it a social-economic interpretation, which is even obvious: “Ours is a divided country. Prague, the “rich part” represents only a portion of it. Zeman, with his populism has triumphed in those regions plagued by unemployment and social malaise – where the crisis is hitting harder”, said Martin, a teacher, according to whom “Schwarzenberg has been favoured especially by the enthusiasm of young people, as well as the support of the intelligentsia, the university students, of those who speak a foreign language and the new generations, which represent the future of our country. Zeman, instead, has won over the vote of the discontented and disillusioned part of the population. A populist such as he is, could not avoid taking advantage of it”.

Meanwhile, the outgoing president Václav Klaus, a supporter of Zeman, comments ironically by paraphrasing the expression that was so dear to his predecessor Václav Havel: “Today, truth and love have prevailed over lies and hatred”. This is going too far according to an elderly client, who asks for her bill and murmurs disconsolately: “Today, Havel dies for the second time. There is obviously some sort of an agreement between Zeman and Klaus. They will probably want to overthrow the government and, I wouldn’t be surprised if Klaus got back onto the saddle soon as head of the government. Who knows what are the considerations at stake”.

Not even Zeman’s attitude to drinking beer and spirits – that he displays also during public appearances – is able to gain the least sympathy at the “U Prezidentů”, even if this is a place where people come above all to have a drink. There is even a client who goes as far as suggesting that his electoral campaign has been paid for by some spirits firm. “There is evidence for it. After the methanol scandal of the last few months, the spirits market over here has been going through a bit of a dormant period . To help it recover, its needs a good testimonial”.