The aim of this article is to provide an overview of the Czech literature translated into Italian. Therefore, it will not be an extensive bibliography of translations, but rather an overlook of the great Czech poets and writers, attempting in the same time to intrigue those readers in Belpaese who have perhaps never heard of certain authors so far.

The Italian translation tradition linked to the Czech culture arises in the 19th century Romanticism and the Czech National Revival, an era of cultural awakening for the Czech lands and for Europe. The rich correspondence from the 19th and 20th centuries between the Venetian philologist Emilio Teza and the poet Jaroslav Vrchlický created a bilateral attraction between the two publishing realities and their respective literary productions. Teza’s enthusiasm for Czech literature led him to translate the anthologies of folk tales and popular songs by Karel Jaromír Erben, the Bohemian Dante. We must mention the collection “Kytice”, to date one of the most famous Czech works in the world, which was published in Venetian academic newspapers, therefore without having a specific publisher.

The Czech National Revival and Čapek

We will have to wait for the birth of Masaryk’s Czechoslovakia to bring back to Italy the interest in Czech works. In the mid-1920s, Giovanni Maver, one of the first Italian Slavists, presented the then unknown figure of Karel Hynek Mácha – almost a Czech Leopardi, by fame – and would lead thirty years later to the first translation of “May”, a bucolic poem with a complex and metaphorical style. In the same year, 1925, the first translation of one of the greatest exponents of the Czech National Revival appeared, Božena Němcová – cornerstone of literature just like our Manzoni. Entitled “La nonna” (Babička), the book was published by Cogliati publishing, but by an unknown translator.

Still in the late 1920s, the contemporary writer Karel Čapek became known in Italy through the wise quill of the Slavist and Florentine translator Wolfango Giusti. It was in the middle of the Fascist regime, and the name had to be Italianised in Carlo Ciapek, thus the first edition of “Trapné povídky” saw the light, published by Slavia publishing in Turin. Its subsequent editions will have to wait for the 60s.
In the 1930s, the Nazi occupation of Czechoslovakia and the birth of the Protectorate of Bohemia and Moravia generated a period of relative stagnation, on one side due to the slowdown of the literary production, and on the other to the censorship imposed by Germans.

Therefore, we must wait until the end of the war for the first openness towards Czechoslovakia in the 1950s, which flourished enthusiastically in the 1960s, even before the Spring.

The Neapolitan Slavist Ettore Lo Gatto was a key actor to whom we owe the very first translation of Mácha’s May, published by Fussi in 1950.

The war had just finished but was still something far too ordinary. This allowed the most famous Czechoslovak character, Švejk, to bring some consolation to the Italian people, thanks to the translation by Venosto Vorlíček. “The Adventures of Good Soldier Švejk” and the tragicomic attitude of the protagonist during the First World War, with Josef Lada’s illustrations, became a reassuring symbol for Italian readers.

On the other hand, according to Alessandro Catalano, professor of Czech literature at the University of Padua and author of “Sole rosso su Praga” in 2004, Czechoslovakia had a prolific literary environment in those years. Precisely this publication will cost Catalano the sharp criticism of Giuseppe Dierna, Kundera’s translator, as we will see later. The dispute between the two academics will bring turmoil between the majority of the leading figures of Italian and Czech Bohemistics, to the point of reviewing their studies and even some of their positions.

Around the beginning of the 1960s, the good Czechoslovak soldier becomes popular again, no longer Švejk but Sc’veik, a transcription from the Czech which will anchor it in the Italian fiction. The volume is edited by Renato Poggioli and Bruno Meriggi, professor of Slavic Philology in those years in Milan, who will author most of the translations of the decade. The publishing house is Feltrinelli, known for its editorial line strictly faithful to original texts and the clarity of content; therefore, it is not surprising that the number of pages almost doubled compared to the previous edition of Vorlíček. The following year, it was the turn of Čapek: his “Tales from Two Pockets”, authored still by Meriggi, arrived in Italy, but this time for Bompiani.

Thus, with the Spring years approaching, the figure of Milan Kundera rises in Czechoslovakia, marking – for better and worse – its destiny, laying a fresco of the socialist reality. However, in Italy, Spring arrived in the pages of two big anthologies, both from 1969, and probably the richest nowadays: the first “Praga non tace. Antologia della protesta cecoslovacca” published by Guanda and containing writings of ostracized citizens during the normalization; the second, “Antologia della letteratura polacca-ungherese ceca-slovacca” by Fabbri publishing. In this last volume, we must underline the first translation of the play R.U.R. (Rossum’s Universal Robots) by Čapek, curated by Jitka Křesálková.

Before moving on to the 70s, it would be appropriate to mention an equally important figure of those years, who unlike Kundera, still accompanies the collective imagination of Czechs: Bohumil Hrabal. Einaudi will be the first publisher, in 1968, to publish “An advertisement for the house I don’t want to live in anymore”, thanks to the pro-Czech action of Angelo Maria Ripellino, started already in the late 1950s. A promise sealed by an agreement with Einaudi for the much desired publication of “Magic Prague”, an immortal compendium on Prague and his spiritual testament. Hrabal will then return in the hands of the Italian readers thanks to the publishing house E/O, but only in the ebb of the 80s and thanks to the quill of Sergio Corduas, founder of Bohemistics in Venice. 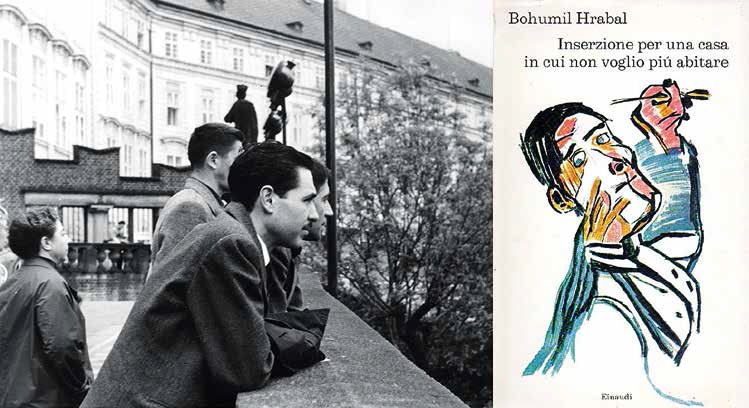 The Unbearable Lightness of the Party

The Spring ended in the 70s, the Soviet block was an everyday reality, but the literary production didn’t stop. Milan Kundera’s writings made their way through expulsions and readmissions in the Communist Party, passing through the brutal ban of his works from public libraries in the entire Czechoslovakia, the forced transfer to France in 1975, leading to the controversial “The book of laughter and forgetting” in 1978, which will cost him the loss of his Czech citizenship. In Italy, there are Bompiani and Mondadori who grab the publishing rights and find, in both of the figures of Serena Vitale and Giuseppe Dierna, the translators who will bring his corrosive and sometimes bitter writing to the Italian public. However, in Dierna’s case, it will be difficult to trace his name, and much easier to find him under his pseudonym, Antonio Barbato. In fact, at the time, to enter Czechoslovakia you still needed an entry visa from the Embassy, and to take credit for that translation would have meant a denied visa, as well as the impossibility of continuing his studies in Prague. “The authorities’ interest in the identity of that translator was proven by the zeal with which, at the Czechoslovak Embassy in Rome, with kind questions and naïve turns of phrase they had repeatedly tried to find out from me who was hiding behind that unknown rookie”, Dierna remembers with these exact words the asphyxiating political control, the bitter constraints and the tiring subterfuges of Czechoslovakia at that time.

The 80s and 90s marked the boom of the Italian interest and the fall of the Wall was felt by everyone. Reprints and transfer of almost lost translation rights started appearing: independent publishing houses came into play. Adelphi republishes the translations of Vitale and Dierna (Barbato), E/O presents the production of Hrabal, taking the translations to be part of the most famous series of Italian publishing: the Meridiani Mondadori (always edited by Corduas). It was then the turn of Sellerio, in the 90s, with the writings of Karel Čapek.

The rise of the independent publishing houses then led to realities such as Poldi Libri, founded by a group of Italian Bohemists and headed by Davide Sormani, with the aim of revealing and spreading Czech and Slovak culture, or even to the series Nová Vlna of Miraggi Edizioni, curated by Alessandro De Vito. In other cases, it led to existing publishers who for the first time took a look at Central Europe, already forgotten by the new millennium. On the one hand Marsilio, which in 2013 became the carrier of the new translation of May by Mácha, the outcome of a cycle of lectures and conferences edited by Annalisa Cosentino and translated by Alessandra Mura; on the other hand Keller Editore, launching two editorial cases: “Money from Hitler” by Radka Denemarková and “The Goddesses of Žítková” by Katerina Tučková, translated respectively by Angela Zavettieri and Laura Angeloni.

As anticipated, this article didn’t pretend to cover such a vast period but aims to raise the interest of readers, as well as offer the front row to those who are usually found on the back of the title page, next to the “translated by” section.