Tourism: from resource to predicament?

The huge influx of tourists has changed the life of the capital, and it is time to weigh up the advantages and disadvantages. For years under the umbrella of economic profit, tourism has changed the connotations of the most beautiful Czech cities. Now some say, enough is enough

The tourism and hospitality sector has been indicated for decades as a remedy for the exit of large industrial plants out of European cities and as a driver for a more conscientious economic development to the environment and the urban fabric. However, something must have gone wrong in the delicate transition from the industrial city to the one of services. In the last few years, there have been several cases concerning centers with a strong touristic impact, from Venice to Barcelona, which were critically reevaluating the mass arrival of visitors. And, the first echoes of criticism are coming as well to Czech Republic and not only in Prague. 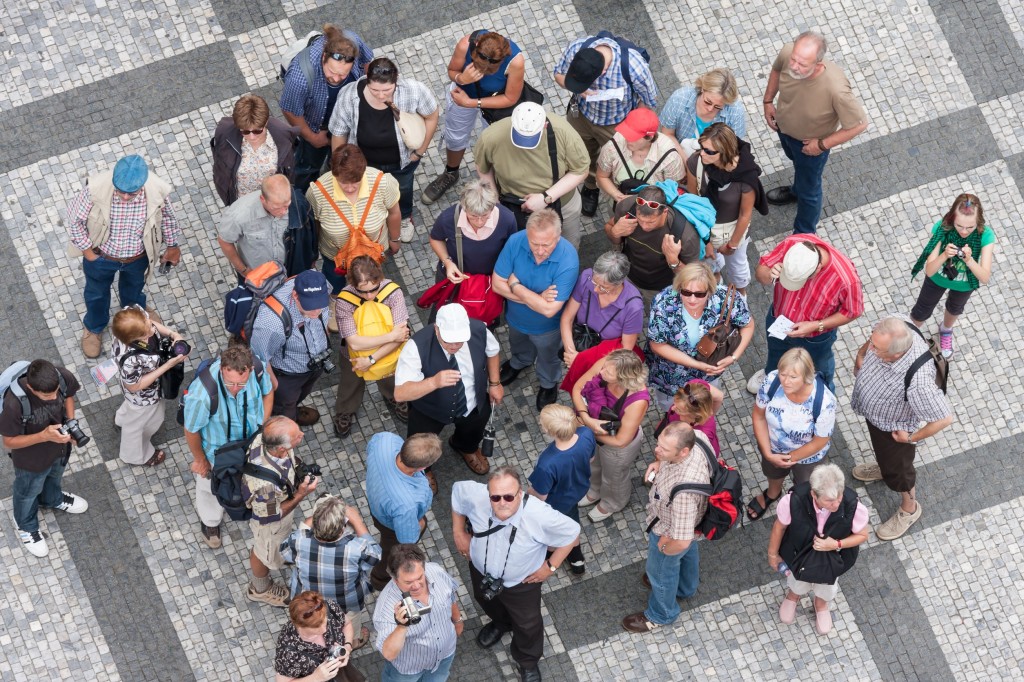 “Houses, in which nobody lives, shops, which are purposeless. Streets where people do not meet but try to avoid each other. This could be the description of a city with a high rate of social exclusion, but also one of the most beautiful cities in the world registered on the list of UNESCO cultural heritage”, declared Kateřina Šedá, presenting her project, chosen this year to represent Czech Republic at the Biennal Art in Venice. In the Czech pavilion, Šedá has opened UNESCO, a fictitious employment agency, which offers visitors a salary to lead a normal life in the center of a typical Czech tourist city, Český Krumlov, free accommodation included. In other words. The strenuous work of living a normal life in the middle of a town full of visitors. The real images of this very real occupation are then live broadcasted in Venice, thus, creating a symbolic bridge between the two cities, which are plagued by a very similar problem. It is not a coincidence that both cities have thought of a similar solution: between 2016 and 2017 the municipal administration of Český Krumlov has thought of a system of gates and caps on the number of accesses, the same one that the lagoon city has been experimenting with in the last few months. With great disappointment not only for the tourists but also for the residents.

Český Krumlov is not the only Bohemian city that encounters risks related to mass tourism. Even the Karlovy Vary spa resort has known for years a strong presence of clients from the former USSR countries, who have changed its appearance and customs. Prague city center is also in danger, where there are over thirty thousand residents (compared to 180.000 in 1990), part of them being false residents to gain access to parking areas for residents and primary and secondary schools in Prague 1. On the other hand, the number of tourists has exploded in the last five years, from 5.7 million to 7.6 million people per year.

At dawn, the Old City does not reveal the best of its faces. The street cleaners have to cope with broken bottles, remains after retching episodes, street corners cleaned the night before, dirt of all kinds and even excrements. The nightlife in Prague has its epicenter on Dlouhá street, where every night groups of foreign tourists meet, mostly young men. The cheap beer and drinks, a relaxed atmosphere and a very soft approach of the police makes it attractive to them.

“We receive hundreds of reports from residents, the biggest problem are young people who have been drinking too much”, confirmed two months ago Oldřich Lomecký, former Mayor in Prague 1. Its municipality has faced the phenomenon with little success. The ordinances against the consumption of alcoholic beverages on the streets have been used more for people without a permanent dwelling than against the frequently loud and overly jolly groups. The patrols of a security agency sent last summer on the behalf of the municipality to settle the conflicts have raised laughter and sarcasm in the newspapers and have been suspended. Moreover, the upcoming municipal elections will certainly bring out other ideas of assured success.

However, the matter of the loutish tourism is not an absolute novelty for the Bohemian capital. With the first lowcost connections with the cities in the UK, Prague has become a destination for young Britons, cheap beer and sex weekends. Due to new platforms such as Airbnb, even the lodging has become low-cost. “The majority of people, that find accommodation in this way, are interested only in beer, strumpets and take advantage of the inefficiency of the police, which allows them to do what they want”, underlines Ivan Solil, councilor in Prague 1 and supporter of the vicious circle argument.

The boom of short-term rentals (only Airbnb recorded a million arrivals last year) often puts good neighborly relationships to the test. There are many complaints of the residents regarding thrown parties, the lack of respect for resting hours or violations of the condominium code (such as smoking in the buildings). However, the neighbors have few levers to deal with the situation since the rented apartments are often owned by foreign citizens, represented locally only by an agency. Therefore, the municipality of Prague 1 has made available to its residents a web page for reporting/denouncing the behaviors related to short-term rentals, which may lead to controls by the municipality’s Department for Economic Activities.

The boost of the Airbnb phenomenon occurred at a delicate moment for the Prague’s real estate market. The high rise in the prices of apartments and rents are partly attributable, as experience has shown abroad, to the transformation of a part of the housings in tourist accommodations. This way flats leave the residential market that is affected by an insufficiency of new buildings. Both local and national politics are far behind with the matter. The Municipality of the Czech capital has succeeded only in the spring of this year to introduce regulatory instruments into a draft bill on sharing economy. If the law were to pass the municipalities could, for example, set a maximum of numbers of days forfshort-term rentals.

The protective wing of tourism

The criticism of tourism industry, which seems to have lost all sense of proportion, is often put to silence by a single argument: the tourism provides for many people. This also applies to Prague and Czech Republic, where this sector represents 2.8% of the GDP and more than 4% of the employment rate. More than half of the turnover is attributable to the incoming from abroad. Therefore, we talk about a sector that will most probably continue to attract a large number of employees, workers who often do not even need high educational qualifications to get hired. On the other hand, these are often precarious jobs, with salaries far below the national average. Then again, in Prague the protective wing of tourism shelters an entrepreneurial layer of sellers of matryoshka dolls, hats and other unthinkable souvenirs, Segway renters and other unsuitable means of transportation, improper currency exchangers or fraudulent taxi drivers.

The tax revenue from these activities is not to be neglected. It is estimated that around twenty billion crowns touch the public treasury. Apart from the salaries of the street cleaners, who clean every morning the streets of the Old City after the overnight wild parties, almost none of this money is directed in fixing the caused unbalances. Maybe it would be a good time to think about creating a special fund for rehabilitation measures in highly tourist areas, somewhat like how things are handled for activities with high environmental impact.