Head bowed, reserved look, eyes in the ground. Only not to look at that red flag, the scythe and hammer displayed in the Sports Palace in Mexico City, which hosted the nineteenth Olympic Games of the modern era during the fall of 1968.

Věra Čáslavská had a gold medal around her neck; and she shared the highest place of the podium with the Soviet Larissa Petrik. While the USSR anthem filled the sports hall, the greatest Czechoslovakian gymnast performed that motionless gesture of resistance, once, twice: during the prize awarding for floor routines, at first, and then at beam, where she would come out second after a disputed decision awarding the golden medal to her opponent Natal’ja Kučinskaja. But even on the second position of the podium, Věra Čáslavská remains a total champion, the only athlete able to collect the Olympic gold medals in all individual types of gymnastics between 1964 and 1968.

She declared later: “From the first note of the Soviet anthem, the one of a country whose armies occupied our land, I unconsciously bowed my head. It was a spontaneous gesture, coming from deep in my heart, from my soul”. A shifted look that betrayed disdain for what had happened a few months before in her far away Czechoslovakia. A land invaded and crushed by Moscow’s tanks that came to normalize the glimpse of freedom budded by Prague Spring. Věra Čáslavská was a supporter and icon of this precise period, already having signed the Manifesto of two thousand words published in June 1968, by the writer Ludvík Vaculík on the Writers Union’s weekly – a highly critical text on the past of the Czechoslovak Communist Party and a hope to continue the transformation process.

Only to think that Čáslavská, the greatest Czech athlete of the time, “the second most popular women in the world after Jacqueline Kennedy” risked not to have set a foot at those Olympics overseas. During the months preceding the Mexican Games, she was in training with the national team in Šumperk, at the foot of Jeseníky Mountains. On the night of August 20 to 21, she was woken up by the shouts of the locals; the Soviet tanks entered the country. An event that highly endangered her taking part of the Olympics. But she did not lose any time nor did she despair and she continued her training using a log as a beam. Power of will and commitment, fueled by the support of an entire people.

Only at the last moment, the Czechoslovakian authorities came to an agreement with the PCU secretary, Leonid Brezhnev, to have her sent to the Games that proved to be her consecration: a first place and a position on the podium. In 1968, Čáslavská was at the top of her career even though her Olympic victories had begun four years earlier, in Tokyo, in 1964, when she managed to defeat the legendary Soviet gymnast Larisa Latynina. At the Europeans in 1967, she caught the judges off-guard with the balance beam and floor routine results. 1.00 displayed the billboard. But it was a 10; the available tools are not able to record the perfection of her exercise. A moment that echoes the achievement of the Romanian Nadia Comaneci at the Montreal Olympics in 1976, who won the first ever perfect Olympic score of 10 for an exercise on the uneven bars. The one who will flee, later, from another Eastern freedom-destroying regime.

Nevertheless, we go back to Čáslavská and her radiant Mexican days. To an experience that goes beyond sports and politics because, that away game contained also elements of festivities and folktale. When the public saw her fluttering lightly on the iconic notes of Jarabe Tapatio, she immediately became the public’s favorite. Then, there was the marriage with the Czechoslovak middle-distance runner Josef Odložil in a Mexican cathedral, attended by thousands: a consecration of her popularity in the Central American country.

Then it was Italy, the honeymoon in Capri, last shinny days. Because courage has a high price under a regime. Due to her gestures and positions, she was considered immediately persona non-grata on her returning home: she was expelled from all competitions and prevented to leave Czechoslovakia. Hence, the decline begins. Starting that time, her life became a long break almost without sport, a twenty years one.

Only after the Velvet Revolution, in 1989, things changed drastically even for her. Czechoslovakia regained its freedom and Čáslavská, became from sports martyr, a sports and social matter advisor for the new president Václav Havel. Later she held the position of President of the Czech Olympic Committee. But just when things seemed to go back on track and Věra Čáslavská recovered her titles and medals, in 1933, the former husband Josef, which she had divorced in 1987, died at the hands of his son Martin, a tragic epilogue of a dispute between the two of them. From that moment on, her public appearances ended, she isolated herself in long years of depression from which she came out of only a few years before dying, in 2016 at the age of 74.

By now, history and, even more, her country remember her as a sports and militancy icon. She was perhaps her country’s most extraordinary athlete, able to collect 140 medals in a few years, out of which 11 Olympic ones and 7 gold ones, 4 world champion titles and 11 European ones. The entire Czech Republic still remembers those eyes that refused submission to a humiliating invasion through a motionless and silent disdain. Proud, just like those two fists clenched in a black glove, those arms lifted to the ski of two color athletes, Tommie Smith and John Carlos, who in the same Olympics have equally turned the podium in a political forum. Militants like Věra, the fearless and lightweight Czechoslovak butterfly. 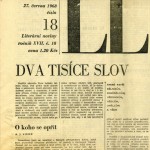 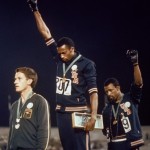