The criminal saga of Victor Lustig, the man who sold the Eiffel Tower

Careful there, reader: the truth in this story is a shifting, chiaroscuro ground, with many-sided escapes in the thousands of identities of that who has spent his life deceiving others. Is everything false? After all, why not. It’s the subtle rim between life and legend, which fades in a multiplication of names, stories, and pasts of an elusive man, a con artist: this was Victor Lustig (1890-1947). This is the man who came from Bohemia and managed to sell not once but twice the tallest tower in Paris, the masterpiece of Gustave Eiffel.

But what if this name is yet another ploy? Little matters. This is movie material. So just believe it and everything will be alright: unbalanced and romantic adventures of another era, analog and cunning. One day, an American secret service agent who was pursuing him said: “Damn Lustig. Vanishing as cigarette smoke and fascinating as the dream of a young woman”.

So, look at him, immersed in this languid ambiance, over there, sitting in the lounge of the luxurious Hôtel de Crillon in Place de la Concorde. Look carefully at this young Bohemian man from a good family, or the son of peasants, or of a baron, as you choose; just look at him, contemplate this all shaking little bourgeois world, well dressed, well mannered. But him, lost in his thoughts. The heavy taste of whiskey that fills his mouth, uplifting his mind. His thoughts are wandering, along the capital’s boulevards, along the Seine, to the large steel tower that dominates the ville lumière.

Back then, that mastodon was nothing but a burden for the Municipality, not yet the diadem of the city, symbol of Paris in the world. Years of poor maintenance reduced the Eiffel Tower, built between 1887 and 1889 for the Great Universal Exhibition, to its worst condition, to the point of bringing demolition to mind. But here is the bait the scammer needed, the track he must follow: from a detail one can build a story. A scenario shaping in his mad and treacherous mind. After all, why not? Everything is possible in the Paris of the 20s, the crazy years, those of Hemingway and his companions. Paris is a “party” wrote the American, after the torments of the world war. And in this explosive mix of art, wild nights and bohemian life, deception creeps in. Paris is a “scam” Lustig imagined, another sip of whiskey and the deal is done: he will sell the Tower. Money (and so much of it) for a hunk of metal. An ambitious plan even for an inveterate con artist. A true quantum leap. Because, for years now, Lustig has been parading fortunes with all kind of scams to the wealthy of Europe and America.

It all started precisely in the French capital where, having landed at nineteen for his studies, he spent more time at gaming tables than at university desks. He turns out an exquisite swindler doing anything his heart pleased at a deck of cards except for talking. He adds the pleasure of seduction to the profit of the scam. This is how he gets a scar on his left cheek, inflicted by a man jealous of the attention he was showing to his wife, a scar that will accompany him for the rest of his life.

But this is only the beginning of the scams at the Parisian tables, the adventure is yet to come, on the ocean. Then he embarked on the transatlantic liners sailing between Europe and the Americas, and in the golden halls of these floating cities, Lustig became a baron of the high Bohemian nobility. Other games, other benefits (for his pockets). He remains an inveterate seducer, a sublime scammer. A savoir faire blending with an exquisite talent for languages. He speaks five of them perfectly: Czech, German, English, French and Italian.

It will be the First War to end Victor Lustig’s maritime adventure. Navigation becomes dangerous due to the continuous attacks of the German navy. Therefore, he decided to settle down in the United States under the name of Hermann Junkers, of the Junkers designers and aeronautical engineers. Thus, the beginning of a new “career”. Frauds in banks, investment funds, counterfeiting of bills and a lot more. But this is another story, another chapter. Returning to France, where Lustig reappears after the American interlude: it’s here that he needs to make the score of a lifetime.

These are the facts: Lustig pretended to be an official of the Ministry of Posts and Telegraphs, the body responsible back then for the Eiffel Tower, and wrote a letter to the most important metal dealers in the country explaining that because of its terrible conditions, the Iron Lady will have to be demolished. Several companies responded positively, but the most interesting was a certain André Poisson, a young entrepreneur, novice and rampant. The ideal victim. After the first negotiations, André Poisson asks for a second meeting. Lustig decides to continue, risks everything and confesses to Poisson that he is poorly paid and that he would need a kick-start amount to conclude the transaction as other candidates showed interest as well and are generous. The corruption detail convinces Poisson, it all adds up! And the young entrepreneur signs a check of 100.000 francs at that time, a huge amount. The two men greet each other and Victor Lustig, swift and tenuous is already somewhere else: he settles the bill at the hotel, cashes in on the check, jumps on the first train to Lion, from where, crossing Italy, continues to Vienna.

A few days later, André Poisson discovered the scam. The check has been cashed, but there was no trace of the dealer. As for Lustig, he leads a golden life in Vienna, always keeping an eye on the French press, waiting to see the scam scandal break out on the front pages of the newspapers. However, after a few days he realizes that something doesn’t add up. There’s not a word in the newspapers about the barely occurred fraud: humiliated and offended, the unfortunate André Poisson decided to maintain absolute silence, not making a complaint and preferring to accept the scam, rather than exposing himself to a certain humiliation. The unthinkable has been accomplished. And so, with the ardor of a seasoned and limitless gambler, Lustig resumes once again. He returns to Paris to sell the tower again. The same strategy. But this time around, the “victim” requires too many guarantees, and the presence of official parties, and the Bohemian feels he doesn’t hold a lucky hand.

Thus, he takes off, another name, another continent, once again America. Here, he carried on with his business, specializing this time in counterfeiting. It’s said that he even fooled Al Capone by selling him a device to make counterfeit bills, obviously a ruse, and then disappeared into thin air. Apparently, Lusting used 47 pseudonyms and dozens of fake passports throughout his life: “The high society in one hand, the low-life in the other. A doctor Jekyll and Mr. Hyde in flesh and bones”, one could write about him. He created such a dense network of lies that even today his true identity remains wrapped in mystery. He was captured in 1935 after setting up a bill counterfeiting operation so wide that it was threatening to shake the confidence in the American economy. A judge in New York convicted him to 20 years in Alcatraz. It was the end of the road.

In March 2015, a historian named Tomáš Anděl, from Lusting’s home town, Hostinné, started to research the biographical information on the most famous citizen of the city. He examined the electoral lists and the historical documents. “He must have attended school in Hostinné”, explained Anděl, “yet he isn’t even mentioned in the list of pupils having attended the local elementary school”. After many researches, Anděl’s conclusion is that there isn’t really any proof that Lustig was born. Richard III of Shakespeare said “and nothing can we call our own but death”, an aphorism that applies to our story. This is the only thing we know for certain, a date: March 11, 1947 at 20:30 the Bohemian scarlet pimpernel died in a common infirmary for prisoners in Missouri. What is left now? A dense mystery, a question with no definitive answer: who was Victor Lustig? 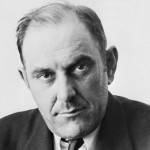 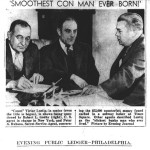 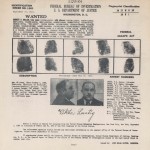 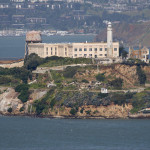